Senate Majority Leader Mitch McConnell (R-Ky.) announced Tuesday that he had crafted a package with an eye toward support from Trump. (See press release below)

“The president will sign the McConnell proposal that he put forward yesterday and we look forward to making progress on that,” Mnuchin told reporters in Washington.

Negotiations on a second major relief package have been continuing for months, with slow progress toward a package but no clarity on when or if a final compromise will be reached.

Ultimately, he told reporters outside the White House, Trump favors a package that would unlock funds already appropriated that will expire at the end of the year if authorization isn’t given for their repurposing.

McConnell said he wanted a package that the president would favor because “you have to have a presidential signature.”

“The latest results of vaccine trials continue to suggest that our victory over the coronavirus is on the horizon.

“But here in Washington, the additional relief that would help families, workers, schools, and small businesses cross the finish line has been held up for months while Democratic leaders pursued an all-or-nothing approach.

“When the Speaker of the House put forward the so-called HEROES Act back in May, multiple House Democrats called it out for the political stunt it clearly was. One Democrat said it was ‘not focused,’ ‘rushed to a vote too fast,’ and it ‘doesn’t help us accomplish [the] core mission’ of helping struggling people.

“Well, after several months with no progress, this same Democrat just said a few days ago that Senate Republicans’ proposal is, quote, ‘a bill we can pass’ and ‘we should negotiate that to the finish.’ Even Speaker Pelosi’s own members think our Senate Republican bill is better than hers.

“Well, let’s hope our Democratic colleagues will finally let us make law in all the enormously important areas where we do not even disagree. In the meantime, the Senate will proceed with pressing business on the executive calendar.

“We’ll vote to confirm several more well-qualified nominees, beginning today with Taylor McNeel, the president’s choice to serve as U.S. District Judge for the Southern District of Mississippi. I hope each of my colleagues will join me in supporting this impressive nominee and those who will follow.” 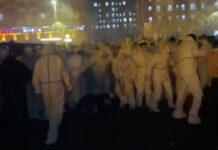