Former President Donald Trump said Saturday night that it’s “too early” to tell if he would consider former Vice President Mike Pence to be his running mate if he runs for president in 2024.

Trump told Fox News in an interview at the North Carolina GOP Convention that while he and Pence have a “very good relationship,” it is too early to be discussing potential running mates.

Trump hasn’t publicly indicated whether he would definitively run for president, however he has committed to remaining active in politics and has hinted at another presidential run in 2024.

“Mike and I have a good relationship, we continue to have a good—but it’s too early to be discussing running mates certainly,” the former president said.

“I was disappointed with Mike on one thing, as he understands and some other people understand, but overall I had a very good relationship with Mike, and he’s a very fine person and a fine man,” Trump told Fox News.

The former president was likely referring to Pence’s refusal to reject the Electoral College vote on Jan. 6. During the breach of the U.S. Capitol building, some chanted “Hang Mike Pence!” after the vice president said he did not have the power to overturn Democrat Joe Biden’s election win.

“I was disappointed on one account, but that was a choice that Mike made, and I want people to make their own decisions, and he did,” Trump added.

“I endorsed Ron, and after I endorsed him, he took off like a rocketship,” he said. “He’s done a great job as governor. I’m saying what I read and what you read, they love that ticket. Certainly, Ron would be considered. He’s a great guy.” 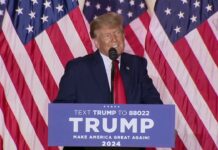 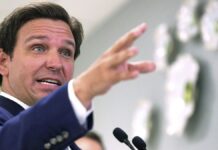