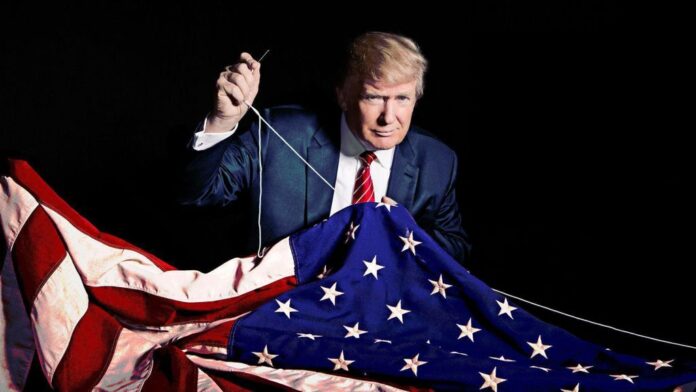 How ironic that a one-time beloved playboy known to have lived the life of a Roman emperor in a golden multi-leveled suite in a tower named after himself with a name that would turn into a brand would one day make a new name for himself as a president focusing on draining a swamp, only to find himself the victim of a never-ending tsunami of hatred! And who would have imagined that when he found a smoking gun in the form of evidentiary emails showing the corruption of his opponent who claimed to have nothing to do with the business dealings of his opportunistic son in Russia, the Ukraine, and China, or the corruption of swamp-like creatures of the spymasters of the underworld  like Comey, Brennan, and Clapper, the media would drain the topics so that most Americans would not even know that there were scandals to evaluate that were not dismissed as debunked, or that the pursuers in the FBI and the CIA should really have been the pursued. And now, with the election characterized by unprecedented high tech corruption as a result of the corona virus, the mail-in balloting, and the computerized opportunities, by hook or by crook or by “glitch,” to transfer thousands of votes, with one click, from Trump to Biden, and in effect mass produce one-party voting, President Trump has an opportunity to take on a project larger than any of his monumental hotels or golf courses, and more ambitious than draining the swamp – to finally expose the corruption in the voting system in America so that future elections will finally be free of political machines of the Clintons and the Obamas, that make the political machines of Daly in Chicago, Johnson in Texas, and Tammany Hall in New York City seem like ripples in a swamp.

Now, the perfidy has reached a new low, where so many allegations of election violations on a massive scale have been documented publicly, yet many if not most of the mainstream spokespeople have actually referred to all of these allegations as “without evidence.” Most notably, a former attorney general of one of the most populous states of the union – Florida – gave a personal account of how there were systemic violations in Pennsylvania of the simple right to have Republicans monitor the vote count – not even count the ballots.

Notwithstanding the fact that the announced vote is incomplete and unofficial, and does not consider any of the multiple challenges that have also been announced, many Democrats and Republicans in Name Only (RINOs) have called for the president to concede defeat like any loser of any typical pre-Trump election. To the contrary, the president now has an opportunity not only to continue to shake up Washington, as he has been doing for the past four years, but to shake up the whole electoral system so that the American people won’t be shaken down every time they emerge from their annual deposits in the ballot box, with the cheating becoming more sophisticated, mechanized, and mass produced than ever before.

Those who claim there is no such thing as voter fraud might consult an article by The Heritage Foundation, Voter Fraud Database Tops 1,000 Proven Cases with a data base of 1,072 cases of voter fraud, including 938 criminal convictions in 47 states, including multiple instances of false submissions of voter registration forms, false birth dates and social security numbers to register deceased persons, and absentee ballots where one individual voted on absentee ballots under different names. The voter fraud alleged for the 2020 election are on a far greater scale, with computer systems such as Dominion tied to prominent Democratic politicians, and in use in 28 states, already exposed to have flipped the names on ballots in thousands of cases.

President Carter’s bipartisan commission on mail-in voting, which convened back in 2005, found that where safeguards for ballot integrity are in place, there was little evidence of voter fraud. Granted; however, safeguards have massively not been in place in the 2020 elections, particularly under the guise of corona-induced mail in voting, and absurd distancing to prevent Republicans from observing the shenanigans of the Democrats in any meaningful way as the votes are tabulated, not to mention the proven massive failures to secure signature verification, and the lack of voter ID by definition for all mail-in ballots. The Carter Commission found that absentee ballots remained the largest source of potential voting fraud. And, of course, never in history have absentee ballots been as much of a percentage of the votes, in addition to the pre-election-day voting, and the post-election day receipt of ballots.

And it may be noted, in passing, that a 2012 Pew Study found that 1.8 million voters remained on the rolls after their passing.

The corruption this year has been on not one level, as in some past elections, but on at least seven levels identified so far  – (a) unconstitutionally having the judicial and executive branches change the rules on when ballots can be accepted, when constitutionally the legislative branch controls – and the legislature in Pennsylvania, for example, is controlled by the Republicans, (b) simple fairness, laws, and judicial orders all require both sides to monitor the counting of the ballots, which was denied most flagrantly in Pennsylvania and elsewhere, without even getting into discussions of the chain of custody, (c) the corruption generated by the unprecedented mail in balloting, under cover of the coronavirus, where ballots were sent to every post office address rather than to people who actually were alive and living at specific addresses, and who actually requested ballots for specific legitimate reasons, many of which purportedly were never returned or at least traced to the ballot boxes  as well as (d) dumped ballots of Republicans, (e) newly found and manufactured ballots of Democrats, (f) going so far as having the government pressure a key witness regarding massive fraud to recant, in the spirit of Stalin, falsely claim that this key witness recanted, in the spirit of Russia’s Pravda newspaper, only to find that the whistle blower came forth and insisted that he did not recant, and the Washington Post should recant its story, and, of course, (g) the garden variety types of corruption, such as forged signatures, and ballots submitted and “signed” by people who moved from one address to another; people who moved to the afterlife, and poll takers who fill in a 2nd candidate on a ballot to invalidate it in such a way that the deception cannot be proven on a mass scale in an investigation or a recount, unless Democrat ballot counters most improbably step forward with the truth.

The mainstream media would have us believe that the president’s lawyers are losing virtually every challenge, just as the mainstream media had us believing that the Democrats would win virtually every hotly contested Senate seat, but the very fact that courts ordered enhanced opportunities for Republicans to monitor ballots is an example of an indication that evidence must have been submitted demonstrating to the satisfaction of the judges that Republicans until that point had not had adequate opportunities to monitor ballots.

Bringing the opportunities for corruption in the electoral process into the open may finally result in the elimination of most of them in the future. So whether or not President Trump will ultimately be deemed the winner of the election of 2020, and especially if he will not, in the ultimate irony he may yet be immortalized in the future for something he never set out to do — for leading to future reforms in the electoral system, preserving democracy for the everlasting benefit of humanity and freedom. The man falsely accused of lying thousands of times (when he was often simply exaggerating and not being precise) may be known for posterity as the man who brought credibility to the way people express themselves in selecting their leaders.

About Ron A. Y. Rich