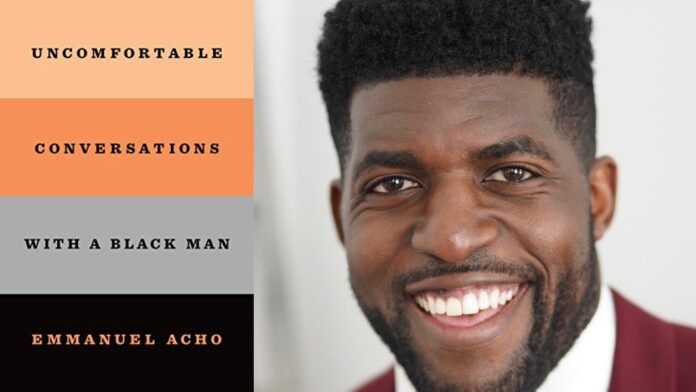 An urgent primer on race and racism, from the host of the viral hit video series
“Uncomfortable Conversations with a Black Man”

“You cannot fix a problem you do not know you have.” So begins Emmanuel Acho in his essential guide to the truths Americans need to know to address the systemic racism that has recently electrified protests in all fifty states. “There is a fix,” Acho says. “But in order to access it, we’re going to have to have some uncomfortable conversations.”

In Uncomfortable Conversations With a Black Man, Acho takes on all the questions, large and small, insensitive and taboo, many white Americans are afraid to ask―yet which all Americans need the answers to, now more than ever. With the same open-hearted generosity that has made his video series a phenomenon, Acho explains the vital core of such fraught concepts as white privilege, cultural appropriation, and “reverse racism.” In his own words, he provides a space of compassion and understanding in a discussion that can lack both. He asks only for the reader’s curiosity―but along the way, he will galvanize all of us to join the antiracist fight.

An Amazon Best Book of November 2020: With an easy warmth, Acho serves up the perfect read for those who might be intimidated by weightier books like How to Be an Antiracist. Listening to this former NFL player talk about race is like listening to the insights of a trusted friend, so that even the uncomfortable bits sink in without sparking defensiveness. —Adrian Liang, Amazon Book Review

“This book from the former NFL player and current Fox Sports analyst provides a new voice in the dialogue about racism.” ―Washington Post

“This incredibly important book tackles all the race-related questions people have but are afraid to ask.” ―GMA.com

“What Emmanuel Acho has to say is important.” ―Matthew McConaughey

“The author delivers exactly what he promises in the title, tackling difficult topics with the depth of an engaged cultural thinker and the style of an experienced wordsmith. Throughout, Acho is a friendly guide, seeking to sow understanding even if it means risking just a little discord.” ―Kirkus Reviews

“An absolute must-read…Emmanuel Acho dives into important subjects like cultural appropriation and white privilege, urging you to find a way to join in the fight against racism.” ―Cosmopolitan

Emmanuel Acho is a Fox Sports Analyst (“Speak for Yourself”) and Host/Producer of “Uncomfortable Conversations with a Black Man,” a web series opening a dialogue about racism. Drafted to the NFL in 2012, Acho played for the Cleveland Browns and later the Philadelphia Eagles until stepping off the field to begin his broadcast career in 2016. In 2019, Forbes listed Acho as a 30 Under 30 honoree, recognizing him for his success as the youngest national football analyst for ESPN. Acho earned his undergraduate and graduate degrees from The University of Texas and his family’s nonprofit organization, Living Hope Christian Ministries, is dedicated to providing adequate medical treatment to the people of Nigeria.