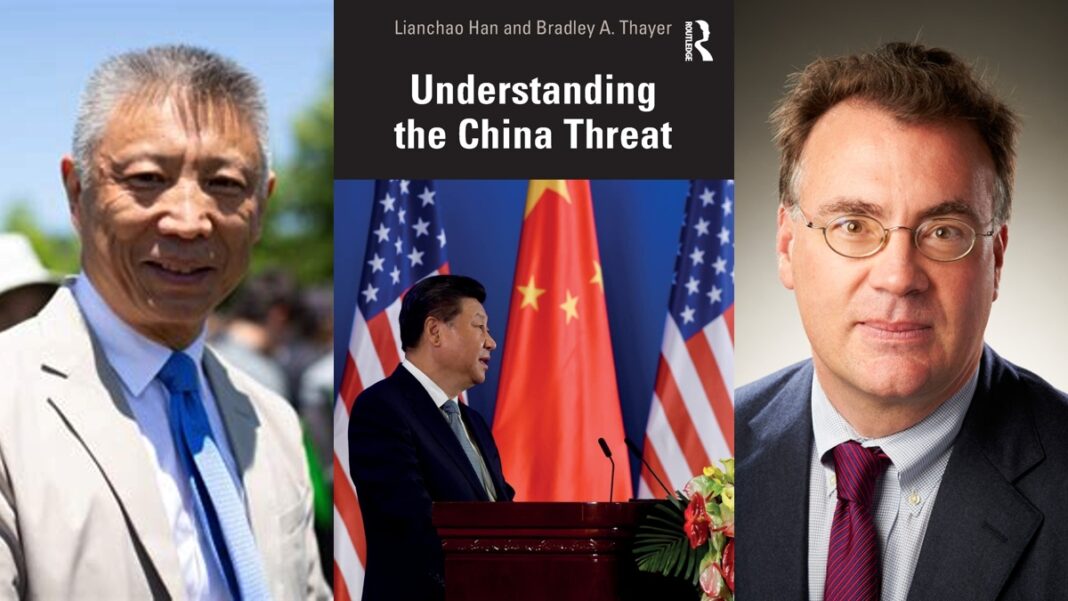 Understanding the China Threat examines the contours of the Sino-American confrontation and its future trajectories. It delineates the two major causes of the friction in Sino-American relations―change in the balance of power in China’s favor and the conflicting ideologies of the two states―and emphasizes why it is imperative for the U.S. to hold on to its ideological principles. It demonstrates the ultimate and irreconcilable gap in the visions the two competitors have for international politics and consequently why conflict―certainly cold, and very possibly hot―is inevitable. The authors also suggest measures which the U.S. can adopt to sustain its leadership and deter China’s ideology and vision for the future of global politics.

A significant contribution to the study of Sino-American relations, the volume will be of interest to scholars and researchers of international relations, foreign policy, and U.S. and Chinese politics. It will be of great interest to think tanks, public policy professionals, and the interested general reader.

“If you want to understand the threat from Communist China, read this book. It is the most insightful study of the sinister nature of the Chinese Communist Party and its ideology by scholars outside of China I have ever seen. Perhaps most importantly, if you want to know who Xi Jinping really is, how he thinks, why he behaves as he does, and the malicious plans he has for China and the world, as well as how the U.S. and the free world can stop him, this book is an essential read.”

“Understanding the China Threat by Lianchao Han and Bradley Thayer is the most important book that I have ever read about the existential threat from the People’s Republic of China (PRC). These two experts present a clear and compelling assessment of the Chinese Communist Party’s ideological threat that remains unchanged since Mao, whose goal is to replace the United States as the world hegemon and rule by totalitarian force. This book is a clarion call for America and as someone who has devoted a lifetime to fighting the ideology of communism, I strongly encourage you to read this book and share widely, especially with our younger generations who have little knowledge or understanding of the threat of communism, especially Chinese communism. As the authors note, the threat is grave, but America can overcome our weak position and defeat the evils of the PRC by a return to our founding principles.”

“Lianchao Han and Bradley A. Thayer have written an exceptional book documenting why China is the global threat to U.S. interests today and for decades to come. Han and Thayer demonstrate why China’s unparalleled expansion of their conventional and nuclear arsenals, employment of economic and ideological warfare, and penetration of Western societies, are the deliberate result of the Chinese Communist Party’s bid for domination. Their recommendations concerning the U.S. and allied response to the China threat should be heeded by U.S. national security decision-makers.”

“On three occasions, the United States has faced an existential threat: from Great Britain in the Revolution, from the expansionist Nazi Germany, and from the nuclear arms of the Soviet Union. But this new threat, from China, is quite unlike anything America has faced before: it is ideological, commercial, diplomatic, and military and on an unprecedented scale. This brilliant book is chilling, but it also offers hope. It charts the brutal politics of Xi Jinping’s emerging new world order, but shows precisely how the US can survive the onslaught, and win.”

“Understanding the China Threat is the single most important and useful guide to the central threat facing the United States. Han and Thayer offer a sober and clear-eyed assessment of what the rise of China means for the future of this country. This is real-world intelligence that will be mission critical for policymakers, citizens and CEOs for years to come.”

Brian T. Kennedy, Chairman of the Committee on the Present Danger: China and President, The American Strategy Group

“In their latest work, Han and Thayer slay the canard that ideas don’t matter― that unlike the Soviet challenge, Beijing doesn’t mean to export a world-changing ideology. As the American and Chinese economies were purblindly intertwined, America itself came to question its birthright of freedom, perhaps uncoincidentally.

Understanding the China Threat is a just-in-time dispatch on the ‘People’s Republic’ and its baleful captain of the ship, Xi Jinping.”

“For anyone seeking to understand the grave threat posed by China, this book is both authoritative and insightful. Lianchao Han and Bradley Thayer are realistic about the China threat and the West would do well to heed the warning that is found in the pages of this critically important volume.”

Dr. Katrina Swett, President of the Lantos Foundation and former Chair of the U.S. Commission on International Religious Freedom

“Tracing the origins of Xi Jinping’s totalitarian state to the foundations of ideological indoctrination, terror, and adulation of a god-like Emperor figure, laid by Mao in 1942-45 in the too-rarely mentioned “rectification campaign” a large-scale purge of those whose loyalty to Mao was suspect – conducted while the Americans and the Chinese nationalists were busy fighting the Japanese – the authors show how those foundations make today’s People’s Republic such a great menace to Americans and the world. Yet those foundations also create the regime’s great vulnerabilities.

Written in a style that is both scholarly and also highly accessible, this book should be helpful for the growing audience of lay readers who have come to be skeptical of rosy myths about Communist China, probably the most dangerous adversary we have faced in the last two hundred years.”

Ambassador Paul Wolfowitz, a Senior Fellow at the American Enterprise Institute, and Distinguished Visiting Fellow at the Hoover Institution, is a former President of the World Bank, Ambassador to Indonesia, Assistant Secretary of State for East Asia and the Pacific, and U.S. Deputy Secretary of Defense

Lianchao Han is a long-time pro-democracy activist. He began his advocacy in the late 1970s in China as a student leader in Hunan and was one of the organizers of the early student protests for free elections in China. Han worked in the Chinese Foreign Ministry after graduating from law school. He later left China to study in the US. After the Tiananmen Square Massacre in 1989, Han was one of the founders and the first vice president of the Independent Federation of Chinese Students and Scholars, the largest overseas pro-democracy organization, and successfully worked to influence the US human rights policy toward China. He worked in the US Senate for 12 years, serving as legislative counsel and policy director for three Senators responsible for legislative strategy in the areas of federal budget, taxation, Social Security and economic policy. Han is a registered US patent attorney and specializes in intellectual property protection strategies and innovation-related issues. Han is also an expert on China’s economic and political development, and currently serves as a Visiting Fellow at the Hudson Institute. Han holds graduate degrees from China Foreign Affairs University, Yale University, George Mason University, and Johns Hopkins University.

Bradley A. Thayer is Director of China Policy at the Center for Security Policy.  He received his Ph.D. from the University of Chicago.  He is a widely published author in a broad range of U.S. national security concerns, including the causes and consequences of China’s rise and its adverse implications for the U.S., its allies, and the other states in international politics; U.S., European, and Chinese grand strategies; the history of Chinese and Western strategic thought; China’s use of force; the origin, development, and rule of the Chinese Communist Party; the history of Communist thought and its evolution from Marx and Engels, through Lenin, Stalin, Mao, Gramsci, the Frankfurt School and critical theory to today; United States national security policy; nuclear deterrence; cyber warfare and deterrence; nuclear proliferation; terrorism; Arctic security; and NATO and transatlantic relations.  His most recent books are the coauthored Understanding the China Threat and the coauthored How China