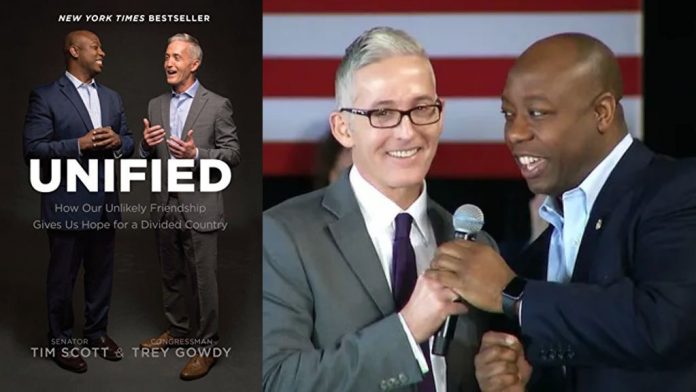 In a divided country desperate for unity, in Unified two sons of South Carolina show how different races, life experiences, and pathways can lead to a deep friendship—even in a state that was rocked to its core by the 2015 Charleston church shooting.

Tim Scott, an African-American US senator, and Trey Gowdy, a white US congressman, won’t allow racial lines to divide them. They work together, eat meals together, campaign together, and make decisions together. Yet in the fall of 2010—as two brand-new members of the US House of Representatives—they did not even know each other. Their story as politicians and friends began the moment they met and is a model for others seeking true reconciliation.

In Unified, Senator Scott and Congressman Gowdy, through honesty and vulnerability, inspire others to evaluate their own stories, clean the slate, and extend a hand of friendship that can change your churches, communities, and the world.

US Representative Trey Gowdy worked as a federal prosecutor before running for 7th Circuit Solicitor (District Attorney) in 2000.  In 2010, Trey ran for US Congress and was elected with historic margin in the Republican primary.

From the back cover:

Our nation is hungry for unity.
Most Americans would rather celebrate what we have in common than focus on our differences. But the feelings of division are real. In recent years, the very foundation of our melting-pot society has been shaken―ironically, by our differences. We long for a story that will give us a glimpse of how to once again find harmony within our diversity.

This is that story.

If friendship and reconciliation can happen in Washington, DC, it can happen anywhere.
Unified tells the remarkable story of two men who came from very different backgrounds: one the ambitious grandson of a cotton picker, the other trained as a lawyer. Decades ago, no one would have predicted their paths would one day be intertwined. But they became good friends and an inspiration to others. If such a friendship can thrive in the competitive world of Washington, DC, it can happen in your community as well.

If we’re going to heal the division in our nation, it will only happen through dedicated friendships that overcome our differences. That’s why Senator Tim Scott and Congressman Trey Gowdy are committed to sharing their story to encourage and inspire others.

We can restore our communities―one friendship at a time. –This text refers to the hardcover edition.