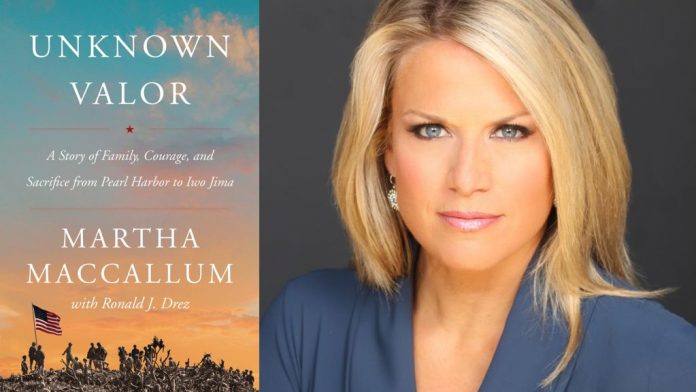 In honor of the 75th Anniversary of one of the most critical battles of World War II, the popular primetime Fox News anchor of The Story with Martha MacCallum pays tribute to the heroic men who sacrificed everything at Iwo Jima to defeat the Armed Forces of Emperor Hirohito—among them, a member of her own family, Harry Gray.

Admiral Chester Nimitz spoke of the “uncommon valor” of the men who fought on Iwo Jima, one of the bloodiest and most brutal battles of World War II. In thirty-six grueling days, nearly 7,000 Marines were killed and 22,000 were wounded.

Martha MacCallum takes us from Pearl Harbor to Iwo Jima through the lives of these men of valor, among them Harry Gray, a member of her own family.

In Unknown Valor, she weaves their stories—from Boston, Massachusetts, to Gulfport, Mississippi, as told through letters and recollections—into the larger history of what American military leaders rightly saw as an eventual showdown in the Pacific with Japan. In a relentless push through the jungles of Guadalcanal, over the coral reefs of Tarawa, past the bloody ridge of Peleliu, against the banzai charges of Guam, and to the cliffs of Saipan, these men were on a path that ultimately led to the black sands of Iwo Jima, the doorstep of the Japanese Empire.

Meticulously researched, heart-wrenching, and illuminating, Unknown Valor reveals the sacrifices of ordinary Marines who saved the world from tyranny and left indelible marks on those back home who loved them.

“Martha MacCallum has written a wonderful book on the bravery and sacrifices of those who ‘island-hopped’ from Guadalcanal to Iwo Jima. Part family memoir, part personal history of small-town America at war, and part chronicle of Marine amphibious landings from 1942 to 1945, Unknown Valor is a beautifully written and stirring reminder to present generations that much of what we now take for granted was given to us by the sacrifices of those whom we must never forget.” (Victor Davis Hanson, Hoover Institution, Stanford University; author of The Second World Wars)

“Unknown Valor is at once so gripping and moving about the war in the Pacific that I lost several nights sleep, refusing to go to bed until I’d read it all. The bookblends fascinating details of Martha MacCallum’s family’s personal story and sacrifice, and the touching moments of hope and family life add a special flavor to the story. Even though we all know how the war ends, what we gain from the book is a deeper appreciation for the scope and scale of the patriotism, dreams, and heartache that lived on. Unknown Valor is a triumph.” (Dana Perino, author of the #1 New York Times bestseller And the Good News Is…)

“Martha is magnificent and so is this book. This is a story of love and military battle told with clarity and heart.”  (Peggy Noonan, 2017 Pulitzer Prize Winner for Commentary and Wall Street Journal Columnist)

“Martha MacCallum’s Unknown Valor is an elegantly written and deeply researched history of how the U.S. Army and Marines won the Pacific theater island-hopping campaign in the Second World War. The sheer heroism of these American fighters on the battlefield is staggering. Every page soars with gritty realism and patriotic perseverance. A powerful saga about the greatest generation!” (Douglas Brinkley, author of The Boys of Pointe du Hoc: Ronald Reagan, D-Day, and the U.S. Army 2nd Ranger Battalion)

“Martha MacCallum has written a magnificent history, at once a sweeping and fresh account of one of the most dramatic chapters in our past—and an intimate portrait of all that’s best and most heroic in the American spirit.” (Sohrab Ahmari, op-ed editor, New York Post)

“If you want your faith in America restored, you simply must read this book.”  (Marc Thiessen, resident fellow, American Enterprise Institute )

Martha MacCallum is anchor and executive editor of The Story with Martha MacCallum, seen Monday through Friday on Fox News. She is also co-anchor of Fox News Election coverage, moderating town halls and debates with the presidential candidates, alongside Bret Baier and Chris Wallace. Prior to becoming anchor of The Story, MacCallum anchored, “The First 100 Days,” reporting nightly on the first months of the Trump administration and interviewing the President on his 100th Day. She has covered presidential and mid-term elections for Fox News since 2004, as well as extensive reporting from the field on the primary races across the country. MacCallum has reported from Normandy, France during the 75th Anniversary of D-Day, and from Iwo Jima’s “Reunion of Honor.” Prior to Fox News, MacCallum was an award winning reporter for CNBC, covering homeland security and the US economy, and a reporter/producer for Wall Street Journal Television.