Recent news accounts have disclosed that David Weiss, the US Attorney for Delaware, deliberately delayed until after the election the announcement of his yearlong investigation of Hunter Biden for failing to report $400,000 in income from Burisma, the controversial Ukrainian energy company.

While Weiss’s silence is commendable, it raises serious questions about why he departed from standard DOJ practice. US Attorneys routinely plant stories about high profile investigations. It is Prosecutor 101, and is so common that my friends in law enforcement joke that the FBI shows up at a crime scene with only two things: a Glock and a press release.

The reason the Feds routinely plant stories about the convening of a grand jury and subpoenas issued is because it is so effective at casting a cloud over their target. Of course, the leakers are always anonymous, but the quotes are attributed to “highly placed officials” familiar with the investigation.

The leaks put the target in a tough spot. Anything they say in response can be twisted by the feds in trial, but their silence is seen as evidence of guilt. The target is like a pinata, gagged and unable to fight back, while the government mercilessly whacks away at their reputation.

Which leaves the nagging question: why did Weiss depart from the standard practice in the Biden case? Leopards don’t change their spots. I found a clue to Weiss’s motivation buried deep in a story about the investigation. The reporter casually mentioned Biden fired 55 of 56 Trump appointed US Attorneys in every District Court in the country – with David Weiss the only exception. Weiss provided the quid and Biden responded with the quo. Alone among his colleagues David Weiss has been allowed to remain in office

That should not surprise anyone familiar with the decline of ethics in the DOJ. In recent years, the DOJ has been exposed for being duplicitous and manipulative – and overtly political. Former gang prosecutor, congressman and now judge Jim Rogan told me, “If you want to fight crime become a DA; if you want to run for office become a US Attorney”.

And once they focus on you, the Feds will not let the facts get in their way. Their assumption is that you are guilty and that if they do not find evidence, they find it or manufacture it. One of my colleagues told me that an IRS agent bragged to him, “We can carve our paddle to fit anyone’s ass”. That echoes a terrifying statement made by Beria, the head of Stalin’s secret police, “You bring me the man, I’ll find the crime.”

In recent years prosecutions of leaders who challenge the power elite have increased at an alarming pace. The prosecutions of Congressman Tom DeLay, Governor Bob McDonnell, Governor Rick Perry, and recently General Flynn, are reminders of the terrible power prosecutors can exercise.  Each of them was an honest and dedicated public servant. Yet they became targets for prosecutors in their quest for high-profile scalps. In the process these fine men had their lives turned upside down and were driven into bankruptcy.

It is not a case of Republican or Democrat. The bureaucracies entrenched in the DOJ and FBI are protectors of the deep state. They will endeavor to destroy anyone who poses a threat to the power elite.

We are a better country than that. The US is not a banana republic that imprisons political opponents at the whim of those in power. We must make drastic reforms to the DOJ and FBI to put an end to these political witch hunts.

Pat Nolan is the Founder of the American Conservative Union Foundation’s Nolan Center for Justice. He was Republican Leader in the California Assembly in the mid-80’s.

Timeline of Texas School Shooting: What We Know so Far 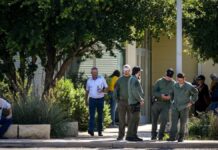