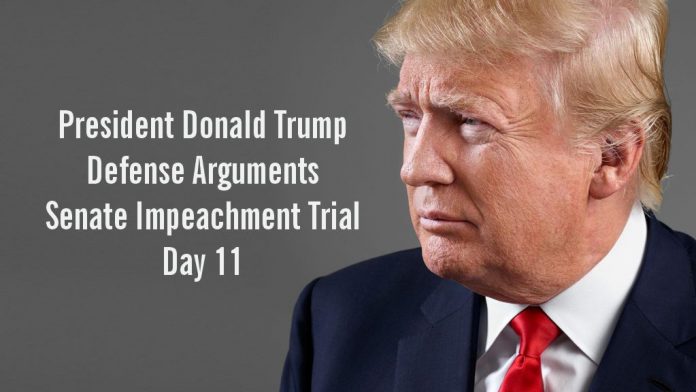 House managers and the president’s legal team are each delivering their closing arguments in the impeachment trial on Feb. 3, 2020 before senators began to weigh in with debate on whether to remove Trump from office. In December, the House of Representatives charged him with two articles of impeachment — abuse of power and obstruction of Congress. After the Senate on Friday voted to bar new witness testimony and subpoenas for documents, Trump’s acquittal has seemed all but assured.

Defending President Donald Trump, attorney Ken Starr suggested that House managers didn’t follow proper procedures in presenting their case against the president’s actions. “It’s why we don’t allow deflated footballs or stealing signs from the field. Rules are rules. They are to be followed,” he said. Starr then asked: “Have the facts presented to you, as a court as the high court of impeachment, proven trustworthy? Has there been full and fair disclosure in the course of these proceedings?”

Deputy White House counsel Michael Purpura argued that there were several reasons “why the articles of impeachment are deficient and must fail.” Purpura also mentioned comments made by acting White House Chief of Staff Mick Mulvaney about the connection between a hold on aid and investigations, saying that either media reports were “misinterpreting” Mulvaney’s comments or he had misspoken.

Deputy White House counsel Patrick Philbin said the House of Representatives “didn’t follow the law” in pursuing its impeachment inquiry into President Donald Trump’s actions. Philbin said, at the beginning of the inquiry, a number of “totally invalid” subpoenas were issued. From there, he argued, the “House violated every principle of due process and fundamental fairness in the way the hearings were conducted.” Philbin continued: “Denying the president the ability to be present through counsel, to cross-examine witnesses and to present evidence fundamentally skewed the proceedings in the House of Representatives.” Philbin said the House’s inquiry wasn’t “truly designed for a search for truth.”

Jay Sekulow, the personal attorney to President Donald Trump, argued that the articles of impeachment “fail to allege impeachable offenses,” and thus should fail. “This entire campaign of impeachment, that started from the very first day that the president was inaugurated, was a partisan one and it should never happen again,” he said. Sekulow further described the proceedings as “reckless.”

White House counsel Pat Cipollone asked the Senate to end “the era of impeachment” and reject the articles of impeachment against President Donald Trump, saying the inquiry had been “purely partisan and political.” Cipollone further said the impeachment proceedings were a “waste” of people’s time and congressional resources.