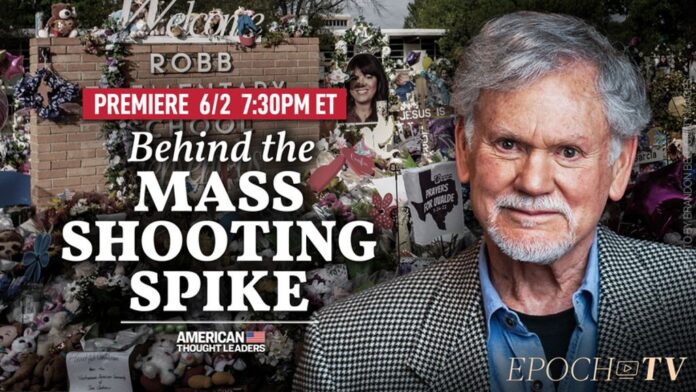 What is a remarkable common link between the overwhelming majority of mass shootings in America?

Is male privilege really to blame for so much of society’s ills?

And why is it a mistake for society to focus so much on the issues women face, while ignoring or not prioritizing challenges men might encounter?

To understand more about what’s going on, I sat down with Dr. Warren Farrell, who’s spent decades researching and writing about gender-related issues. He is the author of “The Boy Crisis,” “The Myth of Male Power,” and a number of other books. A longtime feminist, he is the only man elected three times to the Board of Directors of the National Organization for Women (NOW) in New York City.

“In the United States in the 21st century, there have been six mass [school] shootings that have killed more than 10 people … All six of them have been done by boys who have been dad-deprived—from Sandy Hook right on through to the Texas shooting,” says Warren Farrell, author of “The Boy Crisis: Why Our Boys Are Struggling and What We Can Do About It.”

The recent horrific Uvalde, Texas school shooting has prompted heated debate about gun control, school safety, and mental illness. But few are zeroing in on the importance of a father presence, Farrell argues.

The absence of an involved father is “the single biggest predictor of suicide… [and] one of the biggest causes of mental illness in boys and drug addictions in boys,” Farrell says.

Boys are four times as likely to commit suicide than girls between the ages of 15 and 19. They’re also significantly more likely to drop out of school, become homeless, and end up in prison, says Dr. Warren Farrell.

Dr. Farrell has been researching and writing about gender issues since the 1960s. As a longtime feminist and the only man to be elected three times to the Board of Directors of the National Organization for Women in New York City, he is an unlikely critic of the Gender Policy Council.