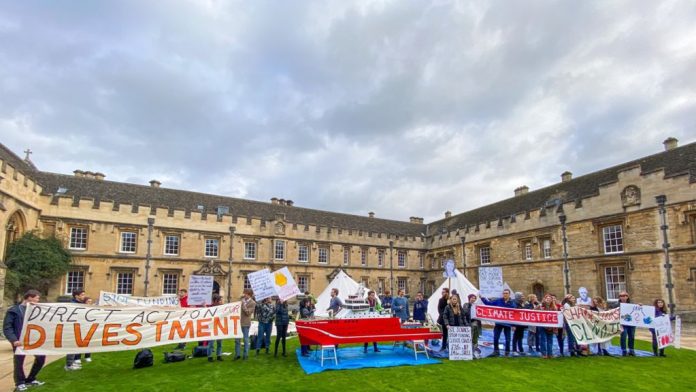 According to an article in the student newspaper, The Oxford Student, Oxford students occupied St. John’s College since Wednesday, January 29, 2020, demanding that the College divests its £8.1 million of disclosed investments in fossil fuel companies and all undisclosed fossil fuel investments from its £551 million endowments. Dozens of students set up camp in the front quad of St. John’s equipped with banners and placards, to demand that it takes the climate emergency seriously and measures to remove the social licence of fossil fuel companies.

According to The London Times article, Professor at St John’s College, Oxford, turns oil row into a heated debate, the student asked for a meeting with Professor Andrew Parker, the principal bursar at Oxford, by letter and he responded.

Two students at St John’s College wrote to Andrew Parker, the principal bursar, this week requesting a meeting to discuss the protesters’ demands, which are that the college “declares a climate emergency and immediately divests from fossil fuels.” They say that the college, the richest in Oxford, has £8 million of its £551 million endowment fund invested in BP and Shell.

Professor Parker responded with a provocative offer. “I am not able to arrange any divestment at short notice,” he wrote. “But I can arrange for the gas central heating in college to be switched off with immediate effect. Please let me know if you support this proposal.”

Also according to the London Times, one of the students wrote Professor Parker back saying that he would pass on the request and criticized Parker for not taking the matter more seriously. Professor Parker responded,

“You are right that I am being provocative but I am provoking some clear thinking, I hope,” Professor Parker responded. “It is all too easy to request others to do things that carry no personal cost to yourself. The question is whether you and others are prepared to make personal sacrifices to achieve the goals of environmental improvement (which I support as a goal).”