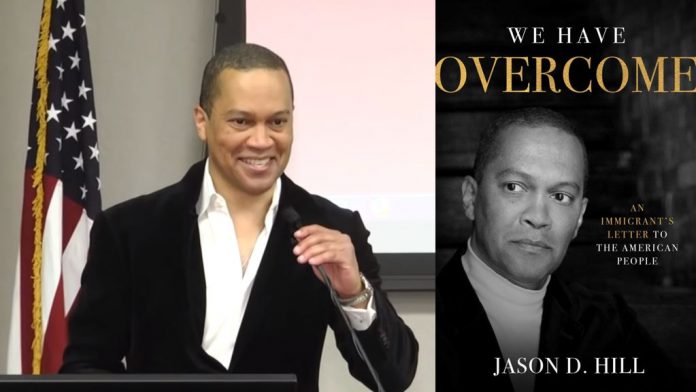 In We Have Overcome: An Immigrant’s Letter to the American People Jason D. Hill, gives a black immigrant’s eloquent appreciation of the American Dream, and explains why his adopted nation remains the most noble experiment in enabling the pursuit of happiness.

It has been more than fifty years since the Civil Rights Act enshrined equality under the law for all Americans. Since that time, America has enjoyed an era of unprecedented prosperity, domestic and international peace, and technological advancement. It’s almost as if removing the shackles of enforced racial discrimination has liberated Americans of all races and ethnicities to become their better selves, and to work toward common goals in ways that our ancestors would have envied.

But the dominant narrative, repeated in the media and from the angry mouths of politicians and activists, is the exact opposite of the reality. They paint a portrait of an America rife with racial and ethnic division, where minorities are mired in a poverty worse than slavery, and white people stand at the top of an unfairly stacked pyramid of privilege.

Jason D. Hill corrects the narrative in this powerfully eloquent book. Dr. Hill came to this country at the age of twenty from Jamaica and, rather than being faced with intractable racial bigotry, Hill found a land of bountiful opportunity—a place where he could get a college education, earn a doctorate in philosophy, and eventually become a tenured professor at a top university, an internationally recognized scholar, and the author of several respected books in his field.

Throughout his experiences, it wasn’t a racist establishment that sought to keep him down. Instead, Hill recounts, he faced constant naysaying from so-called liberals of all races. His academic colleagues did not celebrate the success of a black immigrant but chose to denigrate them because this particular black immigrant did not embrace their ideology of victimization.

Part memoir, part exhortation to his fellow Americans, and, above all, a paean to the American Dream and the magnificent country that makes it possible, We Have Overcome is the most important and provocative book about race relations to be published in this century.

“This passionate book is both memoir and homage. For Jason Hill, America is both an end in itself and a guide to his own personal growth. As a story of black American aspiration, it evokes the great memoirs of Frederick Douglas and Booker T. Washington. But We Have Overcome is a much happier memoir. It shows us an America with an open heart—an America greatly evolved from its dark racial past. So, it is a new kind of book, one that shows us an intrepid young black man finding his way in a friendly country. White American friendliness in sympathy to black aspiration—this is a watershed book.” Author: Shelby Steele, author of “The Content of Our Character: A New Vision of Race in America;” “White Guilt: How Blacks and Whites Together Destroyed the Promise of the Civil Rights Era;” and ” Shame: How America’s Past Sins Have Polarized Our Country”

“Hill is a unique storyteller and writes with clarity and force. He makes a profound contribution to our understanding of an immigrant’s experience in the United States. This book is essential reading given our country’s current discussions surrounding immigration policy and its implications.” Author: Cherylyn Harley LeBon, CEO and President of KLAR Strategies

“America needs her defenders and Jason Hill proves to be one of her fiercest with his new book, We Have Overcome. Today, many Americans have blindly embraced an anti-American stance out of some false sense of virtue. And it takes a writer like Hill with his immigrant eyes to fearlessly attack this blindness, once again bringing to light America’s greatest promise: the individual.”  Author: Eli Steele, Director, Producer, and Writer of the Film “How Jack Became Black”

“Hill’s book is well worth reading for its glowing tribute to America, its penetrating insight into the essentially racist mentality of the left, and its concrete examples of these two conclusions.” Author: American Thinker

Jason D. Hill is professor of Philosophy at DePaul University and the author of three previous books. These include Becoming a Cosmopolitan: What It Means to Be a Human Being in the New Millennium, and Civil Disobedience and the Politics of Identity: When We Should Not Get Along. He is also President and CEO of the Institute for Immigrant Assimilation.