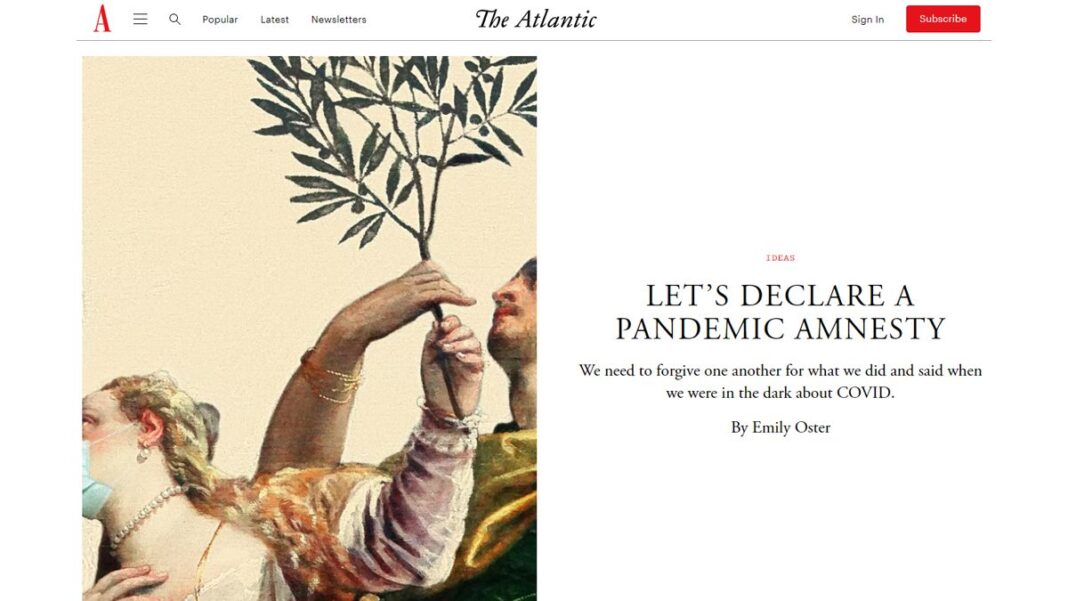 The same Democrats who pushed for imprisonment, fines and even removal of custody of children simply for being unvaccinated now want to make a peace offering.

At the beginning of 2022, I made the prediction that we would see the end of vaccine mandates and that the general populace’s deteriorating tolerance for nonsense would force a pivot in how the absolutely hysterical media covered Covid.

Fast forward eleven months and the same crazed media lot, most recently characterized by The Atlantic, is now pleading for mercy from those it shunned and ridiculed during the pandemic, under the guise of asking for “amnesty”.

“We need to forgive one another for what we did and said when we were in the dark about COVID,” Emily Oster wrote this week.

the throws of the pandemic comes at a point where the Covid narrative has been all but lost by the Democrats and the mainstream media.

There have been several recent large wins for the unvaccinated who had the constitution and backbone to stand up for themselves throughout a year of being constantly berated and ferociously scorned as second class citizens.

A majority of the media and Democrats had demanded that these people be removed from society and generally subject to scorn and ridicule. Now, in a moment that many of us knew would eventually be coming, apologies are being made around the world for how the unvaccinated were treated.

“The premier of Alberta, Canada, said she is working on a plan to pardon residents who were fined or arrested over breaking coronavirus protocols, and apologized to unvaccinated Canadians who faced ‘discrimination.’“

In New York, a Supreme Court judge recently reinstated all employees who were fired from their jobs for being unvaccinated:

The court found Monday that “being vaccinated does not prevent an individual from contracting or transmitting COVID-19.” New York City Mayor Eric Adams claimed earlier this year that his administration would not rehire employees who had been fired over their vaccination status.

To extrapolate further insult from injury, the basis for the original New York City firings, the idea that vaccination prevents the spread of Covid, turned out to be a lie pushed by everyone in the media, from yacht-owning pharmaceutical CEOs to the supposedly “anti-corporate greed” President of the United States.

To extrapolate further insult from injury, the basis for the original New York City firings, the idea that vaccination prevents the spread of Covid, turned out to be a lie pushed by everyone in the media, from yacht-owning pharmaceutical CEOs to the supposedly “anti-corporate greed” President of the United States.

Just days ago we witnessed the stunning revelation that Pfizer never tested its Covid vaccine for transmissibility before proclaiming publicly that the vaccine protected against transmission.

Finally, Italy announced days ago that “doctors and nurses suspended from work because they are not vaccinated against Covid-19 will soon be reinstated,” according to Reuters.

This all comes after the media was forced to finally admit that natural immunity – ignored completely until pharmaceutical companies sold billions in vaccines – wasn’t a myth, earlier this year.

By Quoth the Raven