Critical race theory (CRT) has a new grip on America.

VIRTUAL EVENT: The New Intolerance: Critical Race Theory and Its Grip on America

Critical Race Theory (CRT) has become one of the dominant paradigms of our age, making race the sole prism through which proponents analyze all aspects of the American experience.

Critical Race Theory (CRT) and public policies based on this worldview will not alleviate racial inequality in the real world. In fact, this dogma undermines human and social factors—such as family, entry-level work, and merit-based education—the wellspring of upward mobility. Yet, the rigid persistence with which believers apply this theory has made CRT a constant, daily presence in the lives of hundreds of millions of people.

CRT underpins Identity Politics, an ongoing effort to reimagine the United States as a nation riven by the division between racial groups, each with specific claims on victimization. In education and the workforce, as well as entertainment and social media, CRT has become entrenched, driving decision-making based on skin color rather than individual merit and talent. As Critical Theory becomes more familiar to the public in everyday life, CRT’s intolerance, and the idea of systemic racism is being “normalized” in the American psyche. This weakens public and private bonds that create trust between citizens and allow for civic engagement.

Learn how to push back against this new wave of intolerance.

Critical Race Theory, the New Intolerance, and Its Grip on America 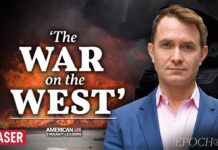