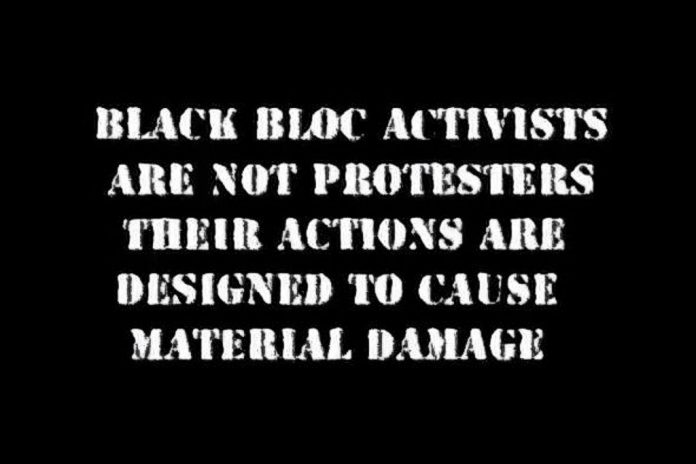 According to Wikipedia, a black bloc is a tactic for protests and marches where individuals wear black clothing, scarves, sunglasses, ski masks, motorcycle helmets with padding, or other face-concealing and face-protecting items. The clothing is used to conceal marchers’ identities, allow them to appear as one large unified mass, and promote solidarity.

The tactic was developed in the 1980s in the European autonomist movement’s protests against squatter evictions, nuclear power and restrictions on abortion among other things. Black blocs gained broader media attention outside Europe during the 1999 anti-WTO demonstrations, when a black bloc damaged property of GAP, Starbucks, Old Navy, and other multinational retail locations in downtown Seattle.

“To the people who don’t understand why Black Bloc activists use militant tactics to destroy corporate property. Black Bloc activists are not protesters. They are not there to protest. There are there to take direct action against the machineries of oppression. Their actions are designed to cause material damage to oppressive institutions but much more importantly they are intended as theater, as a dramatized illustration that even in the face of an overwhelming police state, the people still have the power, that the cops and banks aren’t as powerful as they think and that it really is in our power to strike back. These are vital lessons that the public needs to be reminded of now more than ever. Those in power should fear the public. It seems they have forgotten that lesson. It seems they see us as a docile mass to be herded and controlled at well. Police blatantly disregarding people’s basic rights. Militant protest is an effort to keep that threat alive in a way that standing around waving signs never will. The more completely we forget our power to strike back at those who dominate us, the more complete their domination becomes. This is why we fight.”