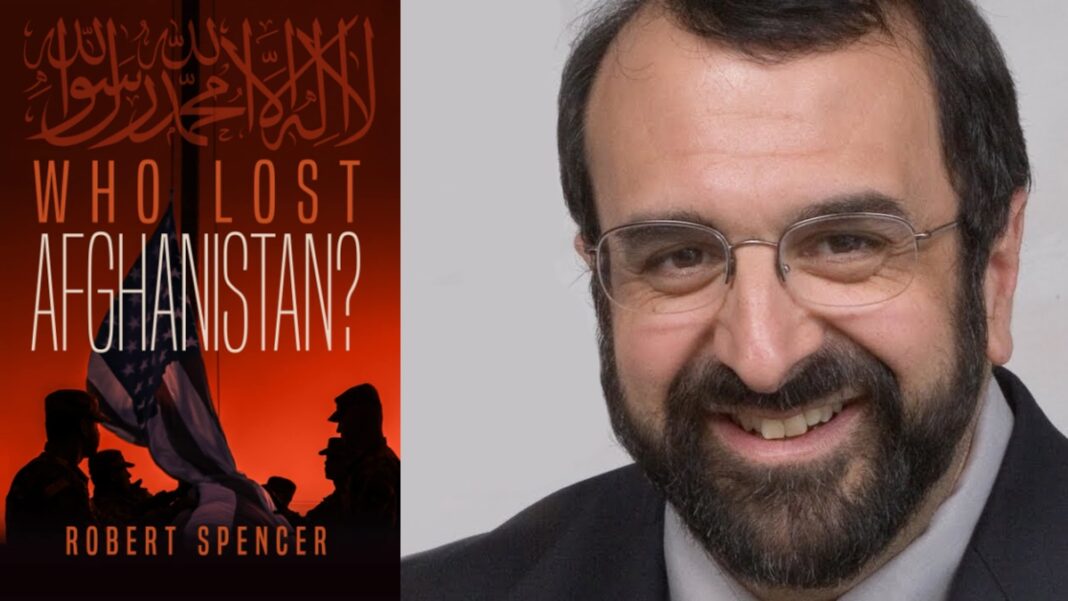 The Center for Security Policy (centerforsecuritypolicy.org) latest publication, Who Lost Afghanistan? looks at how the seemingly successful military campaign to oust the Taliban in response to the attacks of September 11th degenerated into a twenty-year failed campaign, culminating in a disastrous and deadly departure. (Read More)

The U.S. military began its 20-year incursion in Afghanistan, quite simply, because of the jihadist attacks on September 11, 2001, in which nearly 3,000 people were killed. There was never any doubt in official Washington about who was responsible. On the same day the attacks took place, President George W. Bush ordered his Secretary of Defense, Donald Rumsfeld, to draw up plans to attack the jihad terror group al-Qaeda in Afghanistan, where the 9/11 hijackers had trained for their mission.

By then, Afghanistan had been a hotbed of jihad for several decades, beginning with the Soviet Union’s invasion of the country on December 24, 1979. In 1988, a Palestinian Arab, Abdullah Azzam, and a Saudi, Osama bin Laden, founded a loose organization of jihadists known as al-Qaeda (The Base) to fight the Soviets, who eventually withdrew from Afghanistan in defeat in February 1989. Al-Qaeda jihadists then spread out worldwide, and Osama bin Laden set his sights on the world’s other superpower, the United States.

ROBERT SPENCER is the director of Jihad Watch and a Shillman Fellow at the David Horowitz Freedom Center. He is the author of twenty-six books, including the New York Times bestsellers The Politically Incorrect Guide to Islam (and the Crusades) (Regnery Publishing) and The Truth About Muhammad (Regnery Publishing) and the bestselling The History of Jihad From Muhammad to ISIS (Bombardier Books). His latest books are The Critical Qur’an: Explained from Key Islamic Commentaries and Contemporary Historical Research (Bombardier Books) and Who Lost Afghanistan? (Center For Security Policy Press). Forthcoming is The Sumter Gambit: How the Left is Trying to Foment A Civil War (Bombardier Books).

Spencer has led seminars on Islam and jihad for the FBI, the United States Central Command, United States Army Command and General Staff College, the U.S. Army’s Asymmetric Warfare Group, the Joint Terrorism Task Force (JTTF), the Justice Department’s Anti-Terrorism Advisory Council and the U.S. intelligence community. He has discussed jihad, Islam, and terrorism at a workshop sponsored by the U.S. State Department and the German Foreign Ministry. He is a senior fellow with the Center for Security Policy.

Spencer is a regular columnist for PJ Media and FrontPage Magazine, and has written many hundreds of articles about jihad and Islamic terrorism. His articles on Islam and other topics have appeared in the Los Angeles Times, the San Francisco Examiner, the New York Post, the Washington Times, the Dallas Morning News, Fox News Opinion, National Review, The Federalist, Human Events, American Greatness, The Hill, the Detroit News, TownHall.com, Real Clear Religion, the Daily Caller, the New Criterion, the Journal of International Security Affairs, the UK’s Guardian, Canada’s National Post, Middle East Quarterly, WorldNet Daily, First Things, Insight in the News, World Israel News, Aleteia, and many other journals. He has also served as a contributing writer to the Investigative Project on Terrorism and as an Adjunct Fellow with the Free Congress Foundation.

5. The Politically Incorrect Guide to Islam (and the Crusades) (Regnery Publishing, 2005)

6. The Truth About Muhammad: Founder of the World’s Most Intolerant Religion (Regnery Publishing, 2006)

7. Religion of Peace? Why Christianity Is and Islam Isn’t (Regnery Publishing, 2007)

9. The Complete Infidel’s Guide to the Koran (Regnery Publishing, 2009)

12. Not Peace But A Sword: The Great Chasm Between Christianity and Islam (CA Press, 2013)

13. Arab Winter Comes to America: The Truth About the War We’re In (Regnery Publishing, 2014)

16. The Complete Infidel’s Guide to Free Speech (and Its Enemies) (Regnery Publishing, 2017)

17. Confessions of an Islamophobe (Bombardier Books, 2017)

18. The History of Jihad From Muhammad to ISIS (Bombardier Books, 2018)

20. Rating America’s Presidents: An America-First Look at Who Is Best, Who Is Overrated, and Who Was An Absolute Disaster (Bombardier Books, 2020)

22. Islamophobia and the Threat to Free Speech (Center for Security Policy Press, 2021)

11a. Did Muhammad Exist? An Inquiry Into Islam’s Obscure Origins — Revised and Expanded Edition (Bombardier Books, 2021)

26. The Sumter Gambit: How the Left Is Trying to Foment a Civil War (Bombardier Books, 2023)

Spencer (MA, Religious Studies, University of North Carolina at Chapel Hill) has been studying Islamic theology, law, and history in depth since 1980.

What They’re Saying About Robert Spencer

“My comrade-in-arms, my pal, my buddy.” — Oriana Fallaci

“A hero of our times and one of the bravest defenders of liberty that I have ever met.” — Geert Wilders

“No one has upset the Islamophobia cabal more than Robert Spencer. First, he knows more about Islamic doctrine than they do. Next, he has outed all the tricks they use in their taqiyyah bag to disinform the public. Finally, and most importantly, Robert will not be cowed.” — Ayaan Hirsi Ali

“One of the top two or three experts in the world on this great war…against fundamental Islam.” — Stephen K. Bannon, former Trump Administration Chief Strategist and Senior Counselor

“One of the most important writers living today…his books should be required reading.” — Dennis Prager

“A brave crusader against the dopier multiculti illusions.” — Mark Steyn

“I highly recommend that you listen to this guy.” — Glenn Beck

“One of the most acclaimed counter-jihad scholars.” — Asian Tribune

“Robert Spencer incarnates intellectual courage when, all over the world, governments, intellectuals, churches, universities and media crawl under a hegemonic Universal Caliphate’s New Order. His achievement in the battle for the survival of free speech and dignity of man will remain as a fundamental monument to the love of, and the self-sacrifice for, liberty.” — Bat Ye’or

“A leader in this war for over a decade, documenting not just what is happening but explaining why.” — PJ Media

“A leading figure of the conservative movement in the US.” — Limerick Leader (Ireland)

“You simply cannot seriously argue about the question of the conflict between Islam and modernity if you have not carefully read his work.” — Standpoint Magazine

“One of the most insightful and learned scholars of Islam.” — Catholic Insight

“Robert Spencer is indefatigable. He is keeping up the good fight long after many have already given up. I do not know what we would do without him. I appreciate all the intelligence and courage it takes to keep going despite the appeasement of the West.” — Ibn Warraq