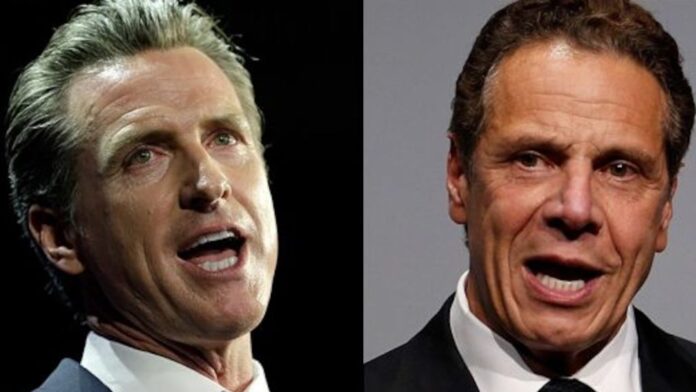 Two Democrat governors are facing the fights of their political lives. Yet one is being offered every resource of the party and the other is being thrown under the proverbial bus.

Two Democrat governors are facing the fights of their political lives. Yet one is being offered every resource of the party and the other is being thrown under the proverbial bus.

A recall effort against California Democrat Governor Gavin Newsom has submitted a petition with more than the 2 million signatures needed to get the measure on the ballot this fall.

Those who want Newsom gone cite his onerous, COVID-inspired lockdown policies, which Newsom timed the lift of to sync up with the Joe Biden’s inauguration as president. Newsom’s lockdown order were some of the most restrictive in the country, inspiring Mayor Eric Garcetti to one point instruct Angelinos to “cancel everything.”

California restaurants and wineries sued Newsom over the in-person dining restrictions that the governor himself broke more than one occasion. He is also alleged to have awarded state contracts to businesses and people who donated to to help with the pandemic. He also released a convicted killer from prison.

In response to the recall effort, the Democratic National Committee said they would donate $250,000 to the Stop the Republican Recall campaign and dispatched their heavy hitters to rush in to Newsom’s aid.

To defend his seat in power, Newsom has hired political consultant Juan Rodriguez. Rodriguez served as Vice President Kamala Harris’ campaign manager during her bid for the 2020 Democratic presidential nomination.

On the other side of the country, the Democrats have clearly abandoned New York Governor Andrew Cuomo. Senate Majority Leader Chuck Schumer (D-NY) demanded the Governor’s resignation, as has Senator Kristin Gillibrand (D-NY). President Biden weighed in with his take this week, saying that Cuomo should resign if the allegations against him are true.