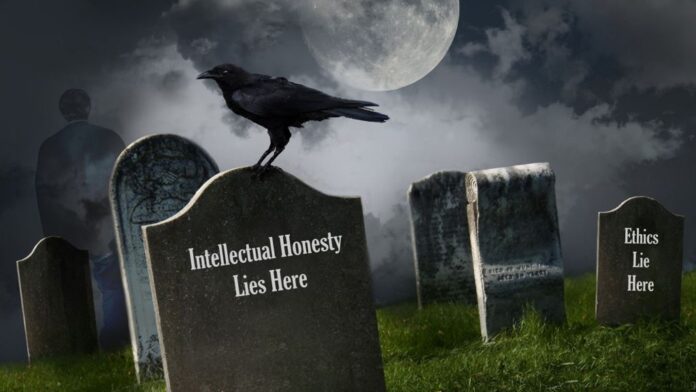 The insanity of “Political Correctness” has been forced on America over the past several decades for multiple reasons. Not the least among them has been the leftist strategy of avoiding any serious discussion of the glaring inconsistencies and outright deception of their ideology. It is simply deemed “offensive” or “hateful” to question the leftist orthodoxy by bringing any element of reality into their ideological cesspool. Sadly, the typical response from our side has all too often been to simply back away from particular issues, in the interests of “avoiding controversy.”

The current precipice on which America now finds itself is thoroughly laden with just such lunacy, shouted at us from each nightly Fake News broadcast. Public statements from leftist Democrat politicians literally drip with it. Yet this parade of arrogant imbeciles no longer fears any backlash. The most outlandish or flagrantly dishonest pronouncements gush forth from them with an obvious lack of the shame that would be evident, were they operating with even a shred of ethical or intellectual honesty. The sanctimony of their post-election strategy is only a continuation of such “moralizing.”

The success of their entire effort rests on one premise, that being the willingness of our side to eventually ignore every criminal breach we have seen in the past two weeks, and instead accept the ridiculous deflections offered by leftist Democrat politicians and their media parakeets. Leftist lies are barefaced, but still issued with their standard air of absolute certitude.

On that basis, we are to believe that the sudden shift from President Trump massively winning to losing in those six states by razor thin margins is valid. The criminal secrecy with which “vote counts” ensued, after all Republican election judges were ejected from the room, is no cause for concern. Those hundreds of boxes of ballots, unanimously marked for Biden, which mysteriously showed up after all the doors and windows were shuttered, are not evidence of election tampering. The leftist political propaganda machine says so. And that’s all we need. We’ve put masks over our mouths for the past nine months because they insisted it was our “duty” to do so. Now it’s time to put a mask over our eyes.

Neither did we see any of the riots, arson, vandalism, brutality, and even murder occurring in leftist cesspool cities throughout America since late spring. It was all “peaceful protests” and the “summer of love,” as contemptuous leftist Democrat politicians could look us in the eye and declare without the least pang of conscience. The only violence they would notice and hysterically decry was that committed by innocent citizens attempting to protect themselves against the onslaught.

It may be a distraction in the midst of all this to focus on whether or not the Wuhan virus was actually an artificial and deliberate bio attack on our nation. But it is clear beyond question that from the moment the disease became prominent on the world stage, leftist Democrats seized on it as their excuse to engage in horrendous abuses of power. Their lust for unaccountable authority, wielding the oppressive hammer of government on the people, could now occur under a faux mantle of “legitimacy.” And that included the seismic push for “mail in ballots.” Yet it is now apparent that had there been no “pandemic,” the left would still have contrived some other bogus “crisis” by which to implement the mail-in voting scam. All of the other pieces were clearly in place.

How massive must the corrupt network be, for the leftist Democrats to shut down the count in Pennsylvania, with President Trump ahead there by nearly a million votes, knowing that they had the ability to turn that number around? How foul must the swamp be, for the leftist Democrats to know they could initiate similar scams in the other five “swing states,” with all of them stopping their vote counts at the same moment, after which the cheating went into overdrive? How thoroughly malignant has this cancer become, for the leftist Democrats to confidently know they had the entire leftist Fake News machine and virtually all of “big tech” ready to cover their tracks by pummeling the American people with the lie that “there is nothing to see here” and that the electoral process is clean and pure as the wind-driven snow?

The only remaining move in this Chess game, with the total domination of the nation at stake, is for President Trump to concede the race, at which point all of the extensive criminality by which it was conducted can be instantly swept under the rug. Unfortunately for the left, the President is immune to the psychological force of their lies, their mockery, and their willingness to collaborate in such a treasonous effort to overtake America itself.

The good people of America have watched in horror as their nation has been “fundamentally transformed” into a grotesque caricature of its former greatness. We’ve witnessed the eradication of our national sovereignty with open borders. We’ve watched in horror as the slaughter of innocent unborn babies proliferated to an unfathomable level. We’ve seen the minds of our youth poisoned beyond recognition with the vile precepts of leftist ideology in government schools and “higher education.” All the while, we felt like a helpless minority, unable to stand against the relentless oncoming tide of the counterculture.

Yet in the initial hours after the polls closed it became obvious that we are not the tiny “fringe” as we’ve been portrayed. The enormity of the “Red Wave” has been made sufficiently evident that we know we can prevail, if only we do not give up the fight at this critical moment. For us to now succumb to the onslaught out of fatigue or cowardice is not only inexcusable, it lays blame for the condition of our nation entirely at our feet if we comply.

On November 3, American Patriots turned out in record numbers, giving President Trump a legitimate victory greatly exceeding that of any previous administration. But then, with the whole nation watching, the vote count magically shifted to Biden. Predictably, leftist propagandists now assure us that most Americans believe Biden actually won. But for Joe Biden to claim those seventy-six million votes would be as big of a joke as any third world sham election, in which tinhorns such as Saddam Hussein or Kim Jong Un ostensibly receive 100% public support. A lie on this scale can never be sanctioned by our surrender, because if we allow it, Americans would thereafter lose the ability to even question such madness.