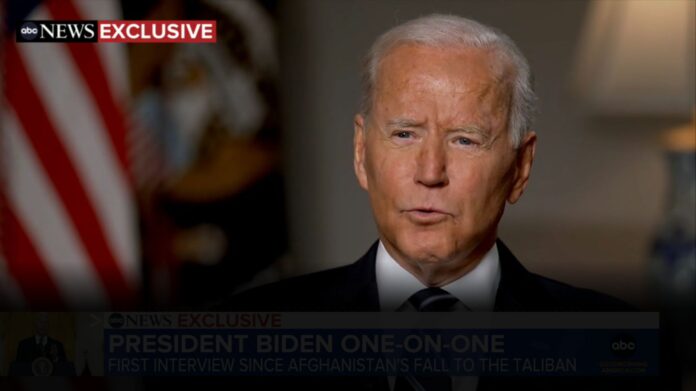 The suicide attack that killed 170 people including 13 U.S. troops provides the crowning disgrace for President Joe Biden, Secretary of State Antony Blinken, and the military leadership going all the way up to Gen. Mark Milley, chairman of the Joint Chiefs of Staff. This disaster in Afghanistan is worse than Benghazi, worse than Jimmy Carter’s hostage crisis, because those were inept responses to an external situation. By contrast, this is a disaster that Biden and his inept team themselves created.

I remember well how Carter’s hostage crisis ended. It ended on the very day that Ronald Reagan was inaugurated in January 1981. Reagan had pledged that he would take very strong action against Iran, without specifying what that action might be. Evidently the terrorists, who had the backing of the Khomeini regime, decided it was not a good idea to test Reagan’s resolve. They let the hostages go.

The current catastrophe in Afghanistan seems to have proceeded in reverse. While Donald Trump was in office, the Taliban continued its war, but neither they nor other Islamic radical groups, from al-Qaeda to ISIS, had the capacity to inflict massive damage on U.S. forces. The moment Biden got into office, however, the Taliban and the other terrorists all realized it was time to get going. They exploited their opportunity to seize Kabul. They were emboldened to launch a suicide attack that was the most successful strike against America since 9/11.

The blame, of course, starts with Biden. He’s primarily responsible for this self-inflicted wound. Yet Biden has done his best to shift the blame to his predecessor, Trump. Biden’s position seems to be that he was merely carrying out a withdrawal that Trump agreed to. Yet Biden has reversed Trump’s policies in innumerable areas, so he was hardly obliged to follow in Trump’s tracks here. Moreover, there’s a huge difference between a decision to withdraw and the manner of the withdrawal. The responsibility for the latter lies wholly with Biden.

In a recent interview, retired Gen. David Petraeus, the four-star general who was former head of U.S. forces both in Iraq and Afghanistan, disputed Biden’s claim that Trump is responsible for the current mess. Petraeus pointed out that there were merely 2,500 U.S. troops in Afghanistan, and they were not doing front-line fighting. Rather, their responsibility was to provide intelligence and logistical support for the Afghan army, and moreover, to help carry out air strikes to provide the Afghan army with cover during clashes with the Taliban.

This, Petraeus says, the Afghan army counted on. They were never trained to fight exclusively on their own. They were trained to fight with U.S. coordination and support, and when this coordination was precipitously halted, and the United States just got up and ran, well, the Afghan army decided to get up and run also. This, Petraeus concludes, is why Afghanistan fell so quickly into Taliban hands.

Biden’s blunders have continued beyond the fall of Kabul. That loss was disastrous enough, because it left a huge cachet of guns and matériel for the Taliban to use itself or put on the international market for other terrorist groups and also for China and Russia. Moreover, thousands of Americans were left stranded, not to mention tens of thousands of Afghan allies who were assured the United States would stick with them but now found themselves vulnerable to imprisonment, torture, and death.

But even after leaving Americans behind—creating a vast potential hostage situation of his own—Biden compounded the problem by giving the Taliban a list of names of U.S. citizens, green card holders, and Afghan allies. The ostensible purpose was for the Taliban to grant these people access to the outer perimeter of the city’s airport, so that they could get out. It’s not clear whether Biden himself made this decision, but his administration clearly approved it.

The danger here should be obvious. The Taliban have been fighting against the United States and its Afghan allies for 20 years. Wouldn’t it make sense that they would grab the list, thank Allah for this incredible gift, and then put all these people on a kill list? Is there any doubt that Islamic radicals hardened by privation and guerilla war would be willing to execute people whom they view as enemies of Allah and the very people they have been trying to kill for two decades?

Yet the Biden administration seems willing to trust the Taliban to protect and help evacuate the people on this list. Press secretary Jen Psaki said the Taliban would want to do this to secure its reputation in the international community, as if the Taliban cares what people at the United Nations or the European Union think about its actions. Equally absurd, the commander of the U.S. Central Command said that the United States and the Taliban “share a common purpose,” which raises the question of why the two groups were trying to kill each other since 2001.

The U.S. media, for its part, has provided relatively little honest critical scrutiny of Biden’s actions, evidently owing to its ideological sympathies with the current administration. There have been several articles instructing Americans not to confuse the Taliban with the ISIS-K group that claimed responsibility for the suicide attack. The underlying premise is that the Taliban and ISIS-K have several disagreements, there have been reported clashes between the two, and therefore it’s not unreasonable to expect the Taliban to assist the United States after an attack mounted by the terrorists of ISIS-K.

These articles have all the persuasiveness of someone who argues that there are two types of snakes in the garden, rattlesnakes and copperhead snakes, and humans should not hastily confuse the two. This may very well be true, and it might also be that rattlesnakes and copperheads don’t get along, since they compete for the same types of food. But it does not follow that humans can count on the rattlesnakes to be our allies when faced with a threat from a copperhead. The wiser course of action is for humans to recognize they are in a snake pit and take action to destroy as many snakes as we can.

Some Republicans are already calling for resignations, but not enough of them, and not loudly enough. It’s not enough to stop at Biden. The Pentagon, State Department, and intelligence agencies all share the blame for this unmitigated disaster. They all put Americans last, they all betrayed their countrymen and women, and they all should face the consequences.