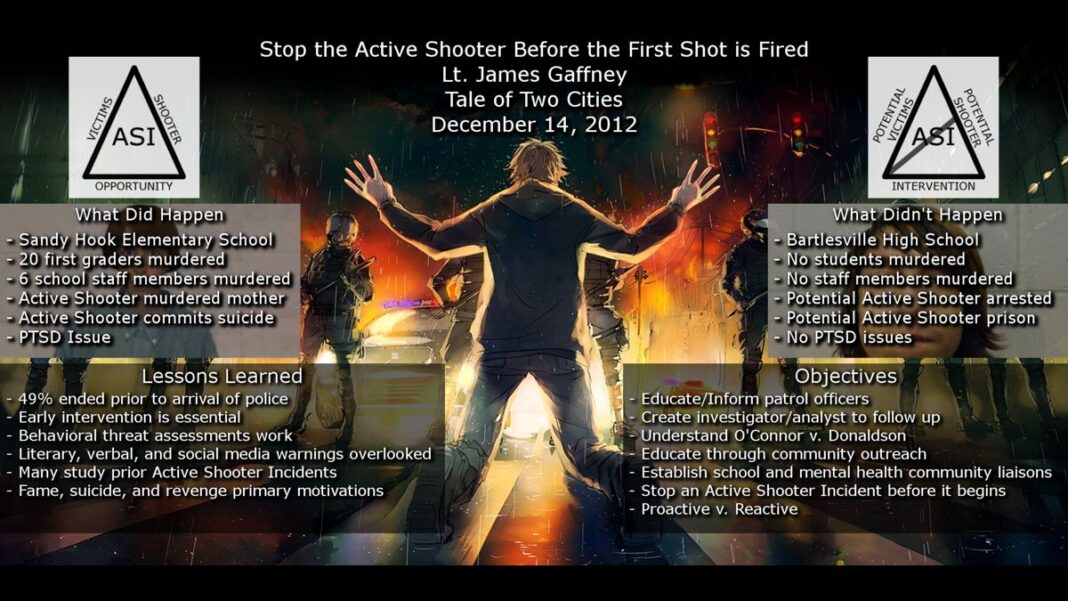 Instead of solely concentrating on what circumstances lead to an Active Shooter Incident (ASI) it is time to focus on a proactive policing to prevent an ASI from occurring. It must be understood an ASI can be stopped before it begins.

An ASI is an attack by an Active Shooter (AS) upon individuals in a highly populated and confined area. ASIs have occurred in our schools, the workplace, malls, a movie theatre and recently an airport. ASIs have tripled over the last five years. Clearly, response alone is not the answer.

I am offering for review examples of ASIs which were defeated before they could be initiated. ASIs have tripled in occurrence over the last five years. Training to improve response to an ASI is mandated and must be continued, but law enforcement must also focus on stopping an ASI before it begins. A two-pronged approach is necessary.

What is the one element which turns a potential ASI into an investigation rather than a response to “shots fired?” The answer is information. The people closest to a potential AS are in an advantageous position to take note of a change in character of someone they know and interact with regularly.

In most instances, a potential AS passes through the Five Stages of the Active Shooter. The police can be proactive during the first three stages. The fourth and fifth stages require a response by the police. The AS is armed, dangerous, and prepared to kill during the later stages.

The Five Stages of the Active Shooter are:

Three teenage boys were arrested for planning and preparing an attack at a high school in New Bedford, Massachusetts. This attack never occurred. A student who overheard the three boys talking about their plan updated the police.

Eric McKeehan, 17, and two 15-year-olds were arrested at their homes by investigators with search warrants who found shotgun shells, knives, a flare, a loose-leaf binder with bomb-making instructions and photographs of the boys holding what appeared to be handguns. Each was arraigned on charges of conspiracy to commit murder, conspiracy to commit assault and battery, and possession of ammunition. These youths were apprehended at the Preparation Stage.

Josh Magee, 17, was arrested in the parking lot of Malcolm High School after a school staff member saw him drinking liquor from a flask and putting on a black overcoat. Magee was arrested after the police found him on school grounds with 20 homemade bombs, a rifle and a note saying he wanted to injure everyone at his high school except for three friends. Magee was charged with attempted murder. .

Richard Yanis, 15 years old, was arrested in Pottstown, Pennsylvania as an adult. Yanis was apprehended for planning and preparing to kill classmates he did not like. Yanis also planned to commit suicide at the Pottstown High School. Neither incident happened.

Yanis stole three handguns from his father. The investigation began when the teen’s father reported his three handguns were stolen from a secured gun locker in his basement. Yanis allegedly took a Smith & Wesson .357 caliber revolver, a Smith & Wesson .22 caliber semi-automatic pistol and a Colt .45 caliber semi-automatic pistol.

Richard Yanis gave the guns and ammunition to a friend who later updated his step-mother and a teacher at Pottstown High School what happened. The police were then notified and initiated an arrest. Yanis planned to attack the school after the New Year. Yanis was charged with attempted murder as an adult. Richard Yanis was apprehended at the Preparation Stage.

The Everett Police Department prevented a shooting spree with multiple intended targets when they arrested David Moore, 23-years of age. Moore told friends at a party, he was going to kill some people, and that he wouldn’t be going to jail. He even talked about plans for his funeral.

Everett Police Sgt. Robert Goetz indicated; Moore had planned to start shooting at the AFK Tavern in Everett. Moore made a deposit to purchase four .40 caliber handguns at Pawn Fathers.  The purchase of the weapons following the statements received by the police from Moore’s friends resulted in Moore’s arrest. David Moore was taken into custody at the Preparation Stage without incident.

Authorities in Prince George’s and Anne Arundel counties foiled what they believe would have been a mass shooting by a man who was about to be fired from his job. Neil Prescott, 28, was taken into custody in Crofton, Maryland. According to officials, the man was facing termination from his job as a subcontractor for Pitney Bowes.

Prescott stated by telephone, “I am a joker, and I’m gonna load my guns and blow everybody up!”  When the police arrived at Prescott’s residence, he was wearing a T-Shirt that read: “Guns don’t kill people. I do.”

A search of Prescott’s home turned up more than 20 guns, including assault rifles and handguns, and thousands of rounds of ammunition. The guns appear to be collected legally. Prescott was taken into custody and held for a psychiatric evaluation with charges pending.

The Pitney Bowes employees in receipt of Prescott’s telephone called the police believing Prescott intended to kill them. Prescott was at the Preparation Stage to carry out his threats to kill people with the large number of guns and ammunition in his possession.

Police arrested an 18-year-old student in Bartlesville, Oklahoma planning a school shooting. Sammie Eaglebear Chavez was reading about Columbine, weapons, how to build pipe bombs on the Internet while also trying to recruit students to help him carry out his plan.

Police arrested Chavez after a student alerted school staff about the plan. This occurred a few hours before the Sandy Hook shooting in Newtown, Conn.  Lt. Kevin Ickleberry indicated, Chavez tried to recruit other students to assist him with carrying out a plan to lure students into the school auditorium. Chavez planned to begin shooting the students after chaining the doors shut.

This incident was stopped at the Planning Stage. The school updated the local police department. The potential victims were protected following the arrest of Sammie Eaglebear Chavez.

These are only a few examples. Many more exist. There are segments of law enforcement unaware of the ability to stop an ASI before anyone is injured or killed. If the law enforcement community is provided information, which leads to probable cause for arrest, much more can be done, rather than simply responding to terminate an AS injuring and killing people.

The public is not updated by the media on a national basis about ASIs stopped by the police. The public is not aware of the true value of providing information in order to stop the AS before he begins. I need to go no further than December 14, 2012 to reinforce my position.

It is well publicized what happened at the Sandy Hook Elementary School on this day. Yet, except for the local media outlets in the Oklahoma area, who has ever heard about what didn’t happen on December 14, 2012 at a high school in Oklahoma?

It is well known Adam Lanza killed 20 children and 6 adults on this day. It should be known that Sammie Eaglebear Chavez did not kill anybody as planned. It should also be known that due to the police being notified of Chavez’s intentions he was arrested and prosecuted under the law.

The difference between a proactive vs. reactive approach in defeating the AS cannot be denied. In Oklahoma, Chavez is serving 2 ½ years in prison for his intention to act out against fellow students. In Newton, Connecticut, Adam Lanza implemented his plan. The difference between these incidents is the police in Oklahoma had the opportunity to be proactive. The police in Connecticut were limited to responding to a “shots fired” call.

An open line of communication between the public and the police is the most powerful tool in overcoming the AS. The number-One mandate in dealing with an ASI is to stop it before it begins!

Lt. Jim Gaffney, MPA (Ret.) has served with a metro-New York police department for over 40 years in varying capacities, culminating with Executive Officer, the Support Services Division, and PIO. He remains a member of ILEETA, IACP, IACSP, and FBI – LEEDA. Jim is a Certified Force Science Analyst. He mentors law enforcement’s next generation as an adjunct criminal justice professor in the New York City area. Jim brings the street into the classroom to prepare students today for their roles as police officers tomorrow.

A Lesson from James Madison: Loose vs. Strict Construction of the Constitution