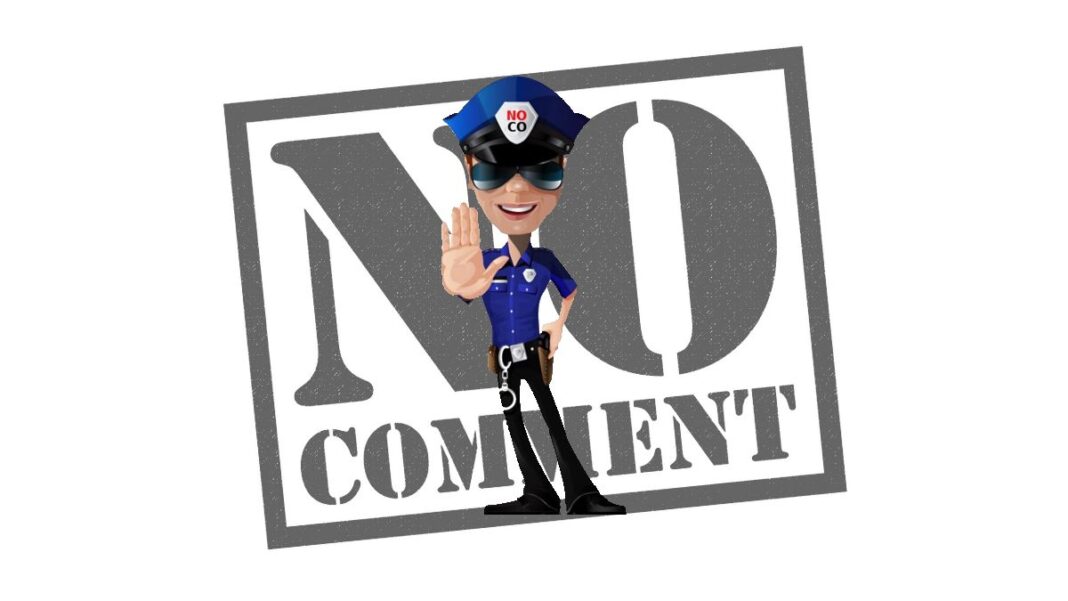 The most important role of a PIO is to offset the possibility of conflict between the media and the police department. The phrase, “no comment” is in fact a comment.  While PIOs or cops working a case may have legitimate reasons to not wish to comment, the message “no comment” sends to the public is that they may have something to hide.

Currently, the DOJ, FBI, and the President of the United States is offering only the phrase no comments regarding why President Joe Biden’s rival in the 2024 election  for President of the United States was subject to a “raid” on his home.  America demands answers! The longer Biden, the DOJ, and the FBI hide behind the phrase “no comment” regarding raiding President Trump’s residence, the more likely it is these agencies are acting jointly and in concert in attempting to take down a political rival. This will not go ignored.

“No Comment” alone without a qualifying statement suggests that law enforcement is either hiding something although the media and the community are demanding answers. These perceptions can be avoided.  Each police agency must be ready to take control of the situation. The media must be used as a tool to inform and update the community as well as helping in many instances to disperse valuable public safety information.

The first step is for each PIO to use an introductory statement at the appropriate time. If there is an active ongoing situation the PIO, simply needs to confirm the incident and direct the media to a staging area where a formal statement will be provided. This must be done to offset the likelihood media will acquire unconfirmed information from sources prior to the briefing.

The role of law enforcement is far different from the media, but the successful PIO learns to coordinate by managing the media to his or her advantage. The PIO reports facts established as a result of an investigation to the public via the media. This is law enforcement’s role, providing information without damaging the integrity of the case.

All individuals under arrest are innocent until proven guilty as are all people under investigation. Which is Donald Trump? Each law enforcement agency must safeguard the rights of the defendant as well as protecting the integrity of the case. In these circumstances, law enforcement is focused on providing need-to-know information when the media is focused on acquiring as much information as wants to know to provide complete coverage.

The media and the public alike have an appetite for information regarding breaking crime news. A new crime story has reporters seeking information to cover the events. The professional law enforcement agency will feed the beast by supplying need-to-know information to reporters as it maintains the integrity of the case.

This approach eliminates relying on “no comment” and it identifies when, where and how the media will be updated. Of greatest value is the initial release serves notice the briefing to follow is the only place where officials authorized to speak about the incident and confirm information will be available. The authorized PIO providing need-to-know information ONLY to the media to update the public is known as “feeding the beast.”

Listed below is a template for a generic statement:

We are aware that an [describe the accident/incident] involving [type of incident] occurred at approximately [time], in the vicinity of [general location]. [Agency personnel] have responded. Additional information will be available as we are able to confirm it. We will hold a briefing at [location] and will notify the press at least ½ hour prior to the briefing. This briefing is the only place where officials authorized to speak about the incident and confirmed information will be available. Thank you for your assistance.

I was often told by other law enforcement personnel not to trust the press as I prepared to accept the position of PIO. My personal experiences with the media are positive. I never addressed a reporter as a friend or foe. I treated each reporter as a professional. A reporter seeks to obtain as much information as possible regarding breaking events. I in turn provided information which needed to be known. This resulted in the creation of open lines of communication which I used to help my department in two cases.

On March 3, 2007 a blue suitcase containing the torso of a dark skinned Hispanic female floated ashore at Harbor Island, in the Village of Mamaroneck, NY. The police department reached out to civic leaders to establish a connection with the Hispanic community. The investigation of the heinous crime resulted in news coverage from the major news affiliates. In time, this homicide was named “The Butcher of Mamaroneck” once America’s Most Wanted joined in the manhunt to identify the murderer of an unidentified victim. Although media coverage was in place with English and Spanish news affiliates and “America’s Most Wanted,” the murderer and the victim remain unidentified, but the coordinated effort between the media and law enforcement came to the forefront. The case is not closed. It is a cold case. The steps taken yesterday in this case, may be the means tomorrow the murderer and victim will be identified.

On September 23, 2004 Clifford Bonner, 42, and his estranged wife, Michelle Bonner, 30, in the company of her half-sister, Candice Rampersaud, 18, agreed to meet at a local park. Mr. Bonner showed up in the park on Saturday afternoon with the couple’s three children. Following arguing over marital difficulties, Mr. Bonner fatally shot his wife and Ms. Rampersaud, and left in the van with the three children.

This resulted in the police department dealing with two crimes.  We needed to obtain information leading to the identity of Mr. Bonner along with confirmation Bonner fled with three children after murdering his wife and sister-in-law. Once the identities of the where verified, we issued an Amber Alert. The sharing of this information with the news media quickly alerted law enforcement and the public regarding the description of the vehicle sought, the registration number, and a description of the children sought.

The Amber Alert was so effective Bonner went into hiding overnight with his children. The following day he brought his children to his father’s home. Once the children were safe, Bonner ran into the woods a committed suicide. The efforts of the media with law enforcement authorities resulted in 3 tragic deaths leading to saving 3 innocent children.

The smallest communities are no different than the largest cities. All law enforcement agencies are to protect and serve the community. One means of protecting and serving the community is via communication. Each agency must be prepared to address the real time reporting issues in place on a 24/7 basis. Departments must use one voice when questions asked by the media.  Answers provided must reassure the public the situation is in hand. A PIO only has one opportunity to send the message in a clear, distinct, precise manner. An experienced PIO must expect questions asked on a local, state, federal, and in some instances an international level.

Remember “no comment” is a comment. The FBI did not ready itself to explain to America. As of this writing, We the People of the United States are awaiting a Press Conference most of us fear will never occur.

Lt Jim Gaffney MPA (Ret.), has served with a metro-New York police department for over 40 years in varying capacities, culminating with Executive Officer and PIO. He is a member of ILEETA, IACP, IACSP, and FBI – LEEDA. Jim is a Certified Force Science Analyst. He mentors law enforcement’s next generation as an adjunct criminal justice professor in the New York City area. Jim brings the street into the classroom to prepare students today for their roles as police officers tomorrow.  He is CEO of Bright Line Consulting and can be reached via www.brightlinepoliceconsulting.com