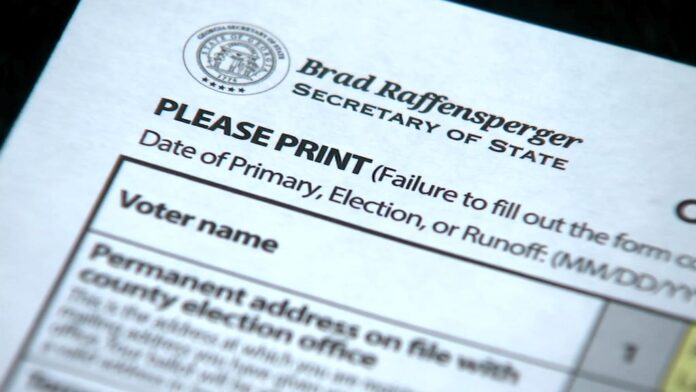 An analysis by The Georgia Star News of DeKalb County’s absentee ballot drop box transfer forms from the November 2020 election identified a number of problems that puts the documents out of compliance with the Georgia Board of Election Emergency Rule 183-1-14-1.8-.14.

The Star News reviewed 725 absentee ballot drop box transfer forms, obtained from the DeKalb County law department in response to an open records request, that were used by DeKalb County during the November 2020 election to document the chain of custody of the 61,731 absentee ballots deposited in drop boxes .

As also reported, a major violation of the emergency rule comes from 43,907 of the 61,731 absentee ballots deposited in drop boxes in the November 2020 election in DeKalb County counted in official tallies certified by the county and state, even though they violated the emergency rule stipulations by not being “immediately transported to the county registrar” because they were signed in as received the day after being collected or they were not signed in at all by the registrar “upon receipt of the ballots from the collection team.”

The emergency rule, promulgated by the State Election Board at their July 1, 2020, meeting, defines when and how absentee ballot drop boxes may be used during an election, as well as an overview of the specifications for the drop boxes and their installation.

The emergency rule also establishes a chain of custody for absentee ballots by specifying that the collection team – which must include at least two people who have both have sworn an oath in accordance with Georgia statute – must complete and sign a transfer form upon removal of the absentee ballots from the drop box, including the date, time, location and number of ballots.

In addition to the violations of the emergency rule related to ballots not being “immediately transported to the county registrar,” chain of custody documentation irregularities related to the two-person collection teams include:

On 8 occasions, the registrar or designee did not print and sign their name.

And, just like at polling locations, absentee voting via drop boxes ends at 7:00 p.m. on Election Day and is spelled out as such in the emergency rule:  “On Election Day, every drop box shall be closed and ballots collected at 7:00 p.m.”

Out of the remaining 30 drop boxes, 18 of the collections representing 511 absentee ballots occurred between 7:00 and 8:00 p.m.

12 of the drop box collections on Election Day representing 573 ballots were made after 8:00 p.m. on Election Day.  The latest collection was recorded as being at 9:12 p.m., more than two hours after the mandated deadline.

The emergency rule also sets out specific requirements as to the frequency of ballot collections from the drop boxes.

Prior to the second Monday before election day, absentee ballots are to be collected from drop boxes at least once every 72 hours.

The chain of custody documents provided by DeKalb County indicate that there were incomplete drop box collections on October 26, 27, 28, 29, 30, 31 and November 1, meaning that ballots were not collected from every drop box on those 7 days.  Additionally, there were no documented collections from any of the 35 drop boxes on November 2, the day immediately preceding Election Day.

DeKalb County was exceptional in its preparation of the transfer forms used during the November 2020 election, used to document the chain of custody of absentee ballots collected from the 35 drop boxes deployed around the county.

Each of DeKalb’s transfer forms was prepared in advance for the collection team with a pre-assigned box number, the box location including a full description and address, the box key number and an identification number.

When the post-election completed documents were supplied to The Star News by DeKalb County officials, they were very organized, in sequential order by the assigned drop box number. Each batch of transfer forms for every single day during the early voting period, from October 6 to November 3, 2020, were provided by DeKalb County in the exact same order.

Not every transfer form documented a drop box collection. In fact, of the 725 transfer forms, about 40 percent or 289 had no documented pick-up of absentee ballots.  Nine of the 35 boxes, identified as box numbers 27 through 35, had no collections until November 3, 2020, Election Day.

However, the drop boxes identified as 1, 2 and 3 located outside the Memorial Drive elections office shared with the tax commissioner, had documented absentee ballot collections from the outset of the early voting period.

On November 20, 2020, Republican Georgia Secretary of State Brad Raffensperger certified Joe Biden as the winner of the state’s 16 electoral college votes over former President Donald Trump by a margin of 11,779 votes out of 5 million cast in the state during the November 3, 2020 election.