Charles Eisenstein is the author of “The Coronation,” a collection of essays that explore the paradigms, dynamics, ideologies, and mythologies that predispose people toward accepting narratives around safety and social control, especially during times of crisis. He argues that governments around the world were able to exploit the need to fit in and feel safe during the pandemic.

“Human beings are exquisitely attuned to reading the mood of the mob. It’s a survival mechanism. In order to fit in, we instinctively adopt the correct opinions and profess those opinions, we signal the appropriate virtues, we respect the appropriate taboos that mark us as part of the in-group and not part of the sacrificial subclass,” Eisenstein said on EpochTV’s American Thought Leaders program.

“This is an ancient, powerful, psychological disposition that fascists and totalitarians exploit in order to control society.”

The conditions for “COVID hysteria” didn’t just start in 2020, Eisenstein noticed that these conditions were well-established by 2017 when the Zika virus popped up, although it was not deadly enough to implement radical public health policies, the “ideological machinery was already in place” for a transition to a “fully medicalized society.”

This approach puts control and safety above all else, said Eisenstein, and puts medical authority above all other authority.

Eisenstein said it is a misnomer that the government can “save lives” and stop death with policies, and it would be more accurate to say “postpone death” and focus more on the quality of life instead of trying to control the inevitable.

“If you hold that [stopping death] as of paramount importance, then you can use it to justify anything, and that’s exactly what we saw. That was the justification for the suspension of civil liberties.” 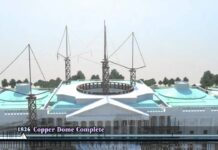