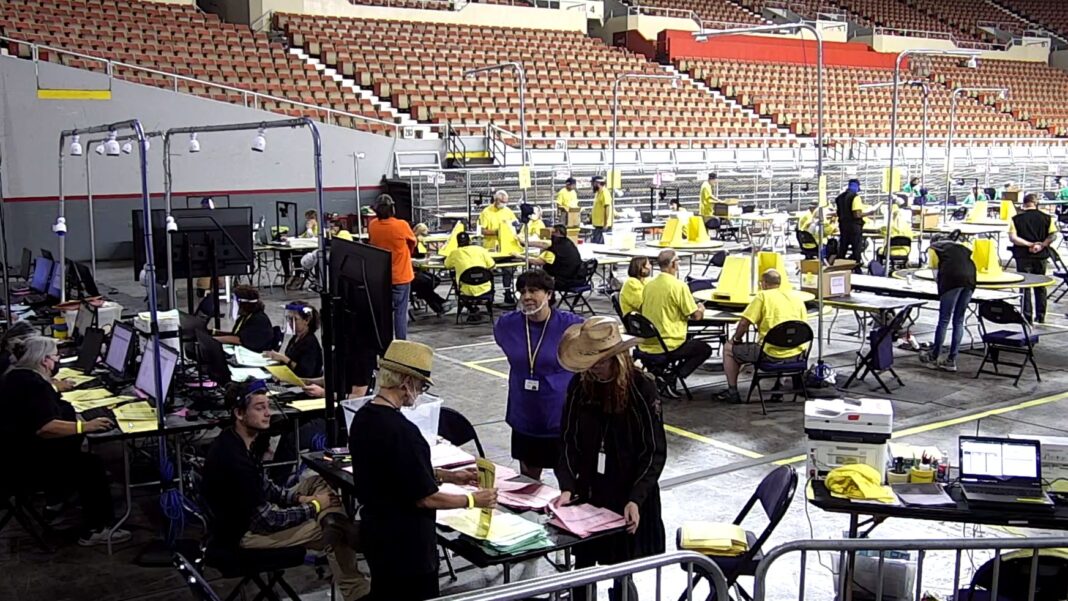 From the moment the Arizona Senate determined that votes and ballots would be audited in Maricopa County (the State’s most populous county), leftist attacks on the effort have been fierce and relentless. From the failed lawsuits intended to halt the audit, to the mockery and castigation from the leftist Fake News crowd, to the toothless Federal demands that it cease, the hysterical accusation of virtually every Democrat mouthpiece has been that the audit posed a grave threat to the Constitution and the “rule of law.” This coordinated outcry was hardly the behavior of an honest political class that had any actual confidence in its own legitimacy.

Things did not improve once the audit commenced. The Maricopa County bosses obstructed and stonewalled at every juncture, causing the audit to drag on for months past its original timetable. All by design of course. In May, they refused to turn over voting machines. Since then it has been learned that many of the machines and other networking hardware were “wiped” in the same manner of Hillary’s illegal server, before they were handed over to state auditing officials. Nothing to hide here, to be sure!

The whole sordid affair has the pawprints of the Clinton Crime Machine all over it. It was indeed the Clintons who, with leftist media help, perfected the scam of transforming evidence they destroyed into claims of “a lack of evidence.” And in the face of tepid, spineless Republican opposition, such tactics to deflect and obstruct justice have all too often proven successful. Clearly, that was the plan among Arizona Democrats and their enablers back in D.C. But things are different now, and the fear among leftists is palpable.

Unlike the plodding and insipid Mitch McConnells and Kevin McCarthys who sit atop the Republican “heap” on Capitol Hill, a new revolution of principled and courageous Republicans are moving into positions of power across the nation. The newcomers are shaking things up for the GOP “Old Guard” who have considered the party nothing more their own personal “club.” Even more significantly, they are refusing to allow leftist Democrats to define the terms of battle. That has been an old but reliable trick by which feckless Republicans were guaranteed eventual failure in the past.

In Arizona, the ones to watch are State GOP Chair Dr. Kelli Ward, who has been a tireless leader in the fight against both leftist Democrats and their RINO minions. Along with her are State Attorney General Mark Brnovich and State Senator Wendy Rogers. Along with other unshakeable pro-Constitution conservatives, they are becoming the leftist Democrats’ worst nightmare. The silent assent and compliance of a dispirited opposition is an essential component of any successful coup. With each passing day, it becomes ever more obvious that these courageous patriots have absolutely no intention of granting such to the left.

Dr. Ward has already asserted the need for AG Brnovich to investigate and prosecute those who have engaged in election fraud. And Senator Rogers is loudly insisting that the Arizona 2020 Presidential Election results be decertified. Of course both scenarios are uphill battles, especially given the “business as usual” lethargy of the GOP “Establishment.” But even the prospect of indictments and criminal proceedings suggests a potential political earthquake with widespread ramifications. And we all know which crowd has the most to fear form that!

Against this calamitous backdrop, with its potential to begin the wholesale unraveling of the leftist Biden Cabal and the ongoing attempted coup, the scrambling of leftists to maintain their tenuous hold on power by any bogus means is increasingly transparent, because it is increasingly desperate. Consider, for example, how twisted and contorted their anti-audit narrative has become, often doubling back over its own previous litany of lies, in flailing efforts to seem “credible” in any given moment.

Recall that the initial anti-audit hysterics obsessed over the mortal threat it ostensibly posed to truth, justice and the American way. Yet as those attempts at obstruction failed, and it became apparent that the audit would continue to completion, the leftist strategy completely reversed. In the final days before the official report was delivered to the Arizona State Senate, leftist media suddenly began proclaiming that the audit had “proven” Biden’s “win” to be legitimate. Both declarations are total lies. And still more profoundly, each totally contradicts the other!

In short, leftist Democrats have simply been conducting “business as usual,” wherein any lie will be told in order to “win” the debate of the moment. Next week’s issues will have their own new set of lies, as needed to give them a phony mantle of “credence.” And on it goes.

The fraud by which the Biden Cabal illegitimately assumed power has now been unmasked in Arizona. And as more audits are becoming inevitable in other states such as Georgia, the truth will be increasingly inescapable that we are living in a time when government that derives its just power by the “consent of the governed” is hanging by a thread. Our America is being wrested from us through wholly illicit means.

Far from the age of dignity and personal integrity, in which government “of the people, by the people, and for the people” was an ideal worth fighting for, modern America is being dragged into the abyss of top-down force being wielded by the powerful against the weak, in pursuit of their own interests. But even at this late date, where the pall of despotism appears to be descending inexorably on our once great and free Republic, the power of the truth to cut through the leftist veil of deceit can still be the deciding factor. We must be diligent and unceasing as we contend for our Nation.