This comes days after the Food and Drug Administration (FDA) granted emergency use authorization for the ACON Laboratories Flowflex COVID-19 Home Test—a new rapid antigen test that can be purchased over-the-counter.

Counselor to the president Jeffrey Zients says the number of tests available each month nationwide is now set to quadruple to 200 million starting in December.

“We’ll continue to pull every lever, as we have throughout the pandemic response, on testing to expand manufacturing production of tests in order to make testing even more widely available and drive down the cost for tests,” he said at a White House COVID-19 Response Team press briefing on Wednesday.

Zients says the federal government is promising to purchase tests to distribute to community health centers, food pantries, and other locations, and will also invest in the testing sector to make more tests available for retail purchase. He says he believes the ACON test will retail at less than $10 per test.

Zients did not say which companies the contracts would go to, but in addition to mentioning ACON, he said the companies Quidel and OraSure have committed to further expanding production of their tests.

The Department of Defense also announced this week that its logistics agency was awarded six contracts with a combined value of over $2.78 billion for 150 million at home and 400 million point-of-care COVID-19 test kits. 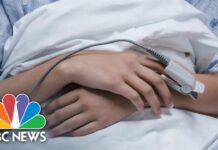