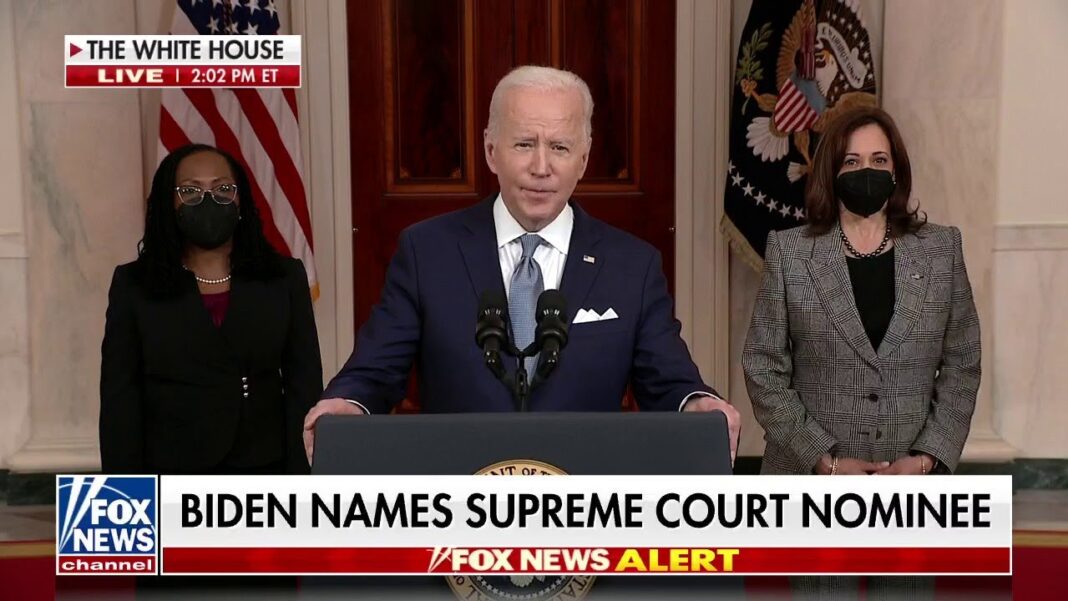 Biden, a Democrat, announced the nomination on Feb. 25. If confirmed, Jackson will fill a seat that is set to be vacated by Justice Stephen Breyer.

Jackson, 51, was confirmed by the Senate in June 2021 to the post she now holds after being nominated by Biden. Before that, she was unanimously confirmed by the upper chamber to serve as a U.S. District Court judge in Washington.

Biden in a statement called Jackson “one of our nation’s brightest legal minds” and said she’ll be “an exceptional justice.”

Biden was scheduled to deliver remarks and introduce Jackson at 2 p.m. Eastern in Washington after meeting with NATO leaders and receiving the president’s daily brief.

Biden restricted his search to black women, a choice supported by many Democrats but described as racist by Republicans. Biden conducted “a rigorous process” to identify Breyer’s replacement, according to the White House.

If confirmed, Jackson would be the first black woman to serve on the nation’s highest court, the sixth woman, and Biden’s first nominee.

Democrats hold a thin majority in the 50–50 Senate because Vice President Kamala Harris can cast tiebreaking votes as president of the body.

But Sen. Ben Ray Lujan (D-N.M.) suffered a stroke in January, leaving him unable to perform all of his duties. Without Lujan, Democrats would need at least one Republican to join them in voting for Jackson, or the Senate could wait until Lujan recovers and returns to the Senate.

Democrats have said they want to move quickly to confirm Biden’s nominee. Senate Majority Leader Chuck Schumer (D-N.Y.) said a Senate Judiciary Committee hearing on the nominee will happen in “the coming weeks” and that after the panel finishes its work, he would ask the Senate to immediately confirm Jackson.

No Republicans have yet said they’ll vote for the judge, and at least one who voted for her in the past indicated he would not this time.

Jackson’s nomination “means the radical Left has won President Biden over yet again,” Sen. Lindsey Graham (R-S.C.), the top GOP member on the Senate Judiciary Committee, said in a statement. Graham, who supported Jackson in 2021, expressed his displeasure that the president didn’t pick U.S. District Judge Michelle Childs, who hails from South Carolina.

Senate Minority Leader Mitch McConnell (R-Ky.) said the Senate must perform an exhaustive review of the nominee, calling it “especially crucial as Americans families face major crises that connect directly to our legal system, such as skyrocketing violent crime and open borders.”

Jackson’s nomination drew praise from some, including NARAL, a group that supports widespread access to abortions.

“We need a justice on the bench who will uphold reproductive freedom. This historic nomination is a chance to shape the Court for decades to come,” the organization said on Twitter.

Sen. Dianne Feinstein (D-Calif.) said Jackson “embodies President Biden’s commitment to ensuring that the federal judiciary is representative of America as a whole.”

Breyer, 83, is the oldest justice on the Supreme Court. He was nominated by former President Bill Clinton. Breyer plans to step down in the summer, after the current term ends.