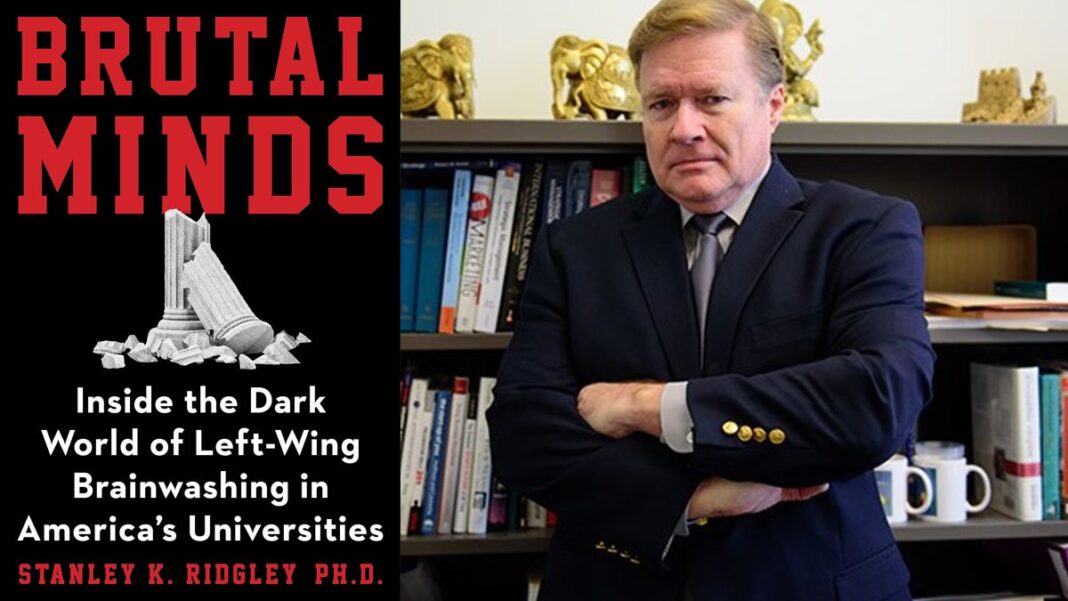 Award-winning professor Stanley K. Ridgley, Ph.D. is a staunch defender of Individualism and Enlightenment values in the university as the best defense against the seduction of authoritarians, charlatans, political poseurs, and noxious ideologues of every sort.  In BRUTAL MINDS, Dr. Ridgley takes on the topics of radicalization, cancel culture, and suppression of free speech and rise of socialism on campuses in the US.  In the tradition of the seminal and influential classic Closing of the American Mind, Ridgley’s book is a call-to-action to halt the left-wing takeover of higher education, bringing this important topic to a new generation.

These are the university’s “brutal minds.” The American university is a sanctuary where brutal minds find purpose, protection, camaraderie, subsidy, anonymity, and power. All of this occurs behind an educational façade that masks their activities and ideology. BRUTAL MINDS strips away the façade of the modern American university to reveal the power inside the institution — the largely anonymous authoritarians who constitute the coercive gears and cogs of the machine; they turn the crank on the ideological grinders that process young people into a prefab conception of the Good Citizen, a 21st century version of the Soviet-style “New Man,” who is transformed with the proper application of “education” and coercion.

STANLEY K. RIDGLEY, PH.D. (PHILADELPHIA, PENNSYLVANIA) is the award-winning author/presenter of Strategic Thinking, the million-dollar best-selling video course published by THE GREAT COURSES – and has been dubbed by The Wall Street Journal and Washington Post as a “rock star professor.” Dr. Ridgley is Associate Clinical Professor of Management at Drexel University’s LeBow College of Business. He holds a Doctorate and Master’s in international relations from Duke University and an International MBA from Temple University. He has also studied at Moscow State University and the Institut de Gestion Sociale in Paris. Ridgley is a former Military Intelligence Officer and served five years in West Berlin and near the Czech-German border, where he received the George S. Patton Award for Leadership from the 7th Army Academy in Bad Toelz, West Germany. His intelligence activities versus the Soviet Union included signals intelligence, electronic intelligence, as well as Russian translation and analysis. He served as a tactical intelligence officer on the German frontier with a combat arms unit and as a liaison officer during Soviet military inspections. Dr. Ridgley teaches courses on Strategy and Competitive Advantage, Technology Innovation, International Business, Competitive Intelligence. He has lectured and presented widely in the United States, Russia, China, India, France, Singapore, Spain, and Colombia. He is Drexel’s faculty sponsor for Turning Point, USA, and the College Republicans; serves on Drexel’s Faculty Senate and as a member of the LeBow College of Business Diversity, Equity, and Inclusion committee. Ridgley is also a member of Drexel’s Institutional Review Board, which provides oversight for the university with respect to human subject experimentation protections under federal law. The author lives & works in Philadelphia, Pennsylvania.

Excerpt from BRUTAL MINDS: Inside the Dark World of Left-Wing Brainwashing in America’s Universities by Stanley K. Ridgley, Ph.D.

Students of politics are familiar with the political metaphor of the “Iron Triangle.” This is an unofficial structure of interlocking interests represented by the U.S. Congress, interest groups, and government bureaucracy. The Iron Triangle purports to explain how “things get done” in Washington as contrasted with the schoolbook description of the three co-equal branches of government crafting legislation and policy. The triangle’s three nodes are mutually reinforcing, and it reproduces itself.

There is another “Iron Triangle,” and this one impacts Higher Education. This one is stealthy, less forthcoming, and aimed at the subversion of the American University. Most persons don’t even know it exists, even those who work in higher education, such as faculty and many staff. The interlocking relationships among the three entities of the higher education triangle are clear and, as far as I can determine, have never been identified and described in quite this way.

This iron triangle is dramatically different from the political model. While the political model comprises three separate entities that negotiate to generate outcomes, the higher education triangle, constitutes three discrete entities—three “heads,” if you will— but with a single cadre of persons who can and often do participate as members of all three. At times they participate in all three simultaneously.

In this, the higher education structure is not a triangle of bodies that negotiate but rather constitutes a single body with three heads — a Cerberus. In Greek mythology, Cerberus comprised three heads of a dog with a single body. Cerberus guarded the gates of the Underworld and permitted no escape to the dead souls consigned there.

The Cerberus of higher education exerts tremendous influence over the total milieu of the university. Its three heads are 1) university schools of education, 2) university “student affairs” offices, and 3) outside non-profit professional associations. These three tightly meshed entities share a common primitive ideology, and they constitute a brutish apparat that exercises increasing power and influence on American campuses, mainly to the detriment of students and the overall intellectual decline of the university.

I call it a Cerberus, because it provides the illusion of three independent heads, but they all connect to one body comprising cadre of trained authoritarian ideologues. The following chapters describe the three entities of this Cerberus and their connections.

This is the beast that ensures that any victory or apparent university reform is fleeting, and that the agenda of university degradation will continue.

Behind the welter of policy pronouncements offered by PR hacks, we can identify the actual people who are responsible, not “policies” or procedures. This is why the student affairs Cerberus must be called out in a naming of names and assignment of accountability. Followed by retraining or removal, preferably the latter.

This metaphorical beast will ensure that no meaningful, lasting reform occurs. With these people still in place—zealots with their primitive ideology—no change is possible and abuse is likely to continue.

Part IV describes the theory, the activities, and the elements of the apparat. All of the material in these chapters is drawn from the writings and speeches and conference material of the apparat, which is freely available for anyone to review (as of this writing). All of this is fully documented here — the people, the schools, the programs, the psychological techniques—and it is characterized here in their own words.