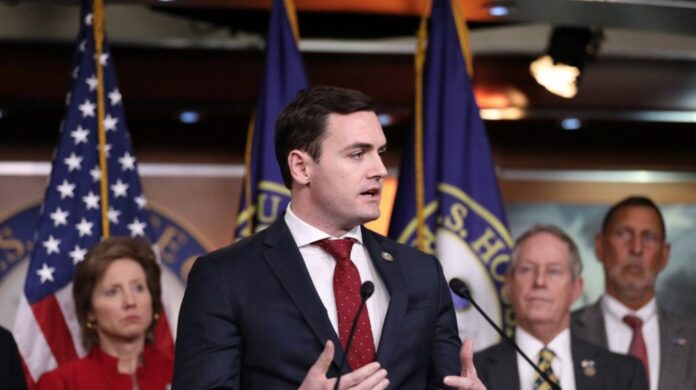 As the Chinese Communist Party (CCP) gears up to celebrate its 100th anniversary this week, bipartisan lawmakers introduced a resolution on June 25 condemning a century of gross human rights abuses perpetrated by the regime against its own citizens.

The resolution, led by Rep. Mike Gallagher (R-Wis.), lists more than 30 atrocities committed by the CCP from the 1930s to today, and vows to stand with the “Chinese people in their struggle for liberty.”

Among the atrocities highlighted were a series of disastrous campaigns helmed by the CCP’s first leader, Mao Zedong. They include a massive land reform movement in the 1940s that saw millions of landlords and others deemed to be “bourgeoisie” beaten and murdered; the “Great Leap Foward” industrial plan that sought to rapidly develop China’s steel production to British or American levels that resulted in modern history’s worst man-made disaster with tens of millions dying of starvation, and the Cultural Revolution that saw the arbitrary arrest, torture, and execution of up to tens of millions of citizens deemed to be “counter-revolutionaries.”

The CCP’s bloody military suppression of unarmed student protesters during the Tiananmen Square massacre, and its ongoing clampdowns in Xinjiang and Hong Kong, were also referenced in the bill.

Gallagher noted that the regime’s abuses in Xinjiang, Hong Kong, and Tibet today are “not a new development.”

“From the very start, brutalizing its own population was hard-wired into the CCP’s core DNA. To understand where the Party is going, we must first understand its past,” he wrote in a June 25 tweet.

“As they use the 100th anniversary to legitimize their malign actions, it is more important than ever to be clear-eyed about the true nature of the CCP, which is the greatest threat to the foundation of democracy of our generation,” McCaul said in a statement.

WASHINGTON, D.C. – In advance of the Chinese Communist Party’s (CCP) centenary celebration on July 1, 2021, Rep. Mike Gallagher (R-WI) today introduced a bipartisan resolution highlighting the CCP’s 100 years of human rights abuses against its own people. The resolution, co-sponsored by Reps. Ruben Gallego (D-AZ), Michael McCaul (R-TX), Josh Gottheimer (D-NJ), and Elise Stefanik (R-NY), Jared Golden (D-ME), and Brian Fitzpatrick (R-PA), includes dozens of abuses dating back to 1930.   “For the last century, the Chinese Communist Party has repeatedly violated basic human rights and brutalized its own citizens,”said Rep. Gallagher. “The story of the Party is one of repression, torture, mass imprisonment, and genocide. This centenary is not a cause for celebration–it is a time to reflect upon the egregious acts the Party has committed and honor the tens of millions of victims who suffered under the Party’s cruel regime.”“The Chinese Communist Party wantonly harass, coerce, and at times kill dissenters within their own country and throughout the world. The United States, as a defender of democracy, must condemn these atrocities and recognize Chinese attempts to censor and manipulate free speech. Their embrace of brutal suppression is a threat to global freedoms and must be stopped,”said Rep. Gallego.“Throughout its hundred-year history, the Chinese Communist Party has used brutal Marxist doctrine to suppress individual liberty and drive unspeakable human rights atrocities. As they use the 100th anniversary to legitimize their malign actions, it is more important than ever to be clear-eyed about the true nature of the CCP, which is the greatest threat to the foundation of democracy of our generation,”said Rep. McCaul.“There’s no question that China must be held accountable for its grave human rights violations and failures to abide by international norms and standards. That’s why the United States must continue to work with our allies and partners to highlight China’s ongoing, egregious abuses in Xinjiang and crackdown in Hong Kong, as well as mobilize the international community to prevail on China to alter its behavior. Issues with the CCP do not end here though — China continues to be responsible for stealing American intellectual property and the Chinese government cannot be fully trusted to come forth with accurate information about the origins of the outbreak of COVID-19. I am proud to support bipartisan efforts in Congress to address the full range of challenges posed by China under the CCP, including threats to the universal values of freedom and human rights,”said Rep. Gottheimer.“Over the last century, the world has witnessed the horrific human rights abuses committed by the Chinese Communist Party,”said Congresswoman Stefanik. “From the millions of Chinese killed under the reign of Mao Zedong, to today’s genocide of Uyghur minorities by Xi Jinping’s regime, crimes against humanity and the violation of basic human dignity are built into the DNA of the Chinese Communist Party. As the CCP approaches its 100th anniversary, the free world must hold them accountable for their history of horrific human rights abuses and support the Chinese people who are in pursuit of freedom and liberty.”  “As we have seen from COVID-19, the Chinese Communist Party has consistently, intentionally, and maliciously misled the rest of the world about its true objectives and intentions. This centenary gives us the somber opportunity to reflect upon the tragedies and human rights abuses that the Chinese Communist Party has inflicted upon the Chinese people and other nations. We must urgently hold the oppressive CCP accountable,” said Rep. Fitzpatrick. Some of the abuses highlighted in the resolution include:﻿