HUNTINGTON BEACH, Calif.—Preliminary findings of the massive oil spill off the coast of Huntington Beach show it may have been caused by a ship’s anchor.

Federal transportation investigators said Oct. 5 the spill was possibly “caused by an anchor that hooked the pipeline, causing a partial tear,” according to the Associated Press.

“We do not have confirmation as to how the pipeline ruptured,” Petty Officer Steve Strohmaier of the U.S. Coast Guard Joint Information Center told The Epoch Times. “We are looking into a dropped or dragged anchor as a possible cause, but this is all under investigation currently.”

The head of the company that operates the pipeline said after the line was ruptured, it was dragged across the ocean floor.

“The pipeline has essentially been pulled like a bowstring. And so at its widest point, it is 105 feet away from where it was,” Amplify CEO Martyn Willsher said at a news conference.

As the massive lineup of arriving container ships grows each day, it is now taking weeks to reach their port destinations in Los Angeles and Long Beach resulting in many of the ships dropping anchor to wait it out, thus expanding the anchorage field into areas not normally so broad-reaching.

“This has happened with ships anchoring and hitting pipelines and cables,” Dr. Sal Mercogliano, associate professor of history at Campbell University in North Carolina, told The Epoch Times.

Mercogliano referenced a November 2016 article in Popular Mechanics magazine about a ship’s anchor slicing through three different undersea or submarine internet cables running along the seabed of the English Channel, likely caused by the ship at fault dragging its anchor along the channel’s floor scraping an off-limits area where the cables ran. Fixing the issue took the companies involved almost three weeks to remedy.

As of Oct. 5, there are 63 container ships anchored at the port of Long Beach, which is one more than last week. 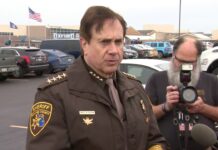