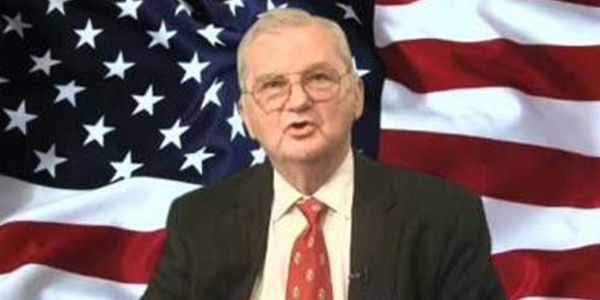 An unalloyed defensive strategy leads to certain defeat in the long run. My question today is, “Can the U.S. have a winning foreign policy?”

During the transition period between the 1980 election and the January, 1981 inauguration of President Reagan, I worked in the personnel office of the President-elect.

From all across the country, conservative friends asked me during this period what could be done to clean out the “rotten State Department.” They knew that, despite any verdict of the voters, Federal law protects members of the Foreign Service.
Foreign Service officers can be fired if convicted of a felony. But merely an obvious loathing for the policies of the President of the United States is not a legally valid reason for their dismissal.

To these friends I replied, in jest, that we would simply have to swell the size of our U.S. embassy staff in Lagos, Nigeria. Lagos is notoriously the worst diplomatic posting of all. Quite often nothing works in Lagos, not the electricity, the telephone, the water, the sewerage or even the roads. Leftists in the State Department would find themselves facing the choice between resignation or long years in Lagos.

But, of course, it didn’t happen.

In the spring of 1985 I was invited by students to speak in Connecticut at Choate, the exclusive preparatory school which nurtured John F. Kennedy.

After my remarks and a lengthy question and answer period, a sixteen year old student, wearing a Jack Kemp for President button, came up to me. He said, “Gee, Mr. Blackwell, I agree with everything you said, particularly about foreign policy. My dad is in the Foreign Service, and he has told me all these things before.”

I replied, “You mean your father is in the Foreign Service, and he’s a conservative?” “Yes,” he said. “Where is he posted?” I asked. Came the reply, “Lagos, Nigeria.”

Many faults of the State Department are notorious. A speaker before a U.S. conservative political gathering guarantees himself applause when he declaims on the manifold sins and wickedness in Foggy Bottom.

Former Reagan National Security Advisor Richard V. Allen, a foe and a victim of the U.S. foreign policy establishment, said last year, half in fun and all in earnest, “To say there are no conservatives in the State Department is preposterous. . .I know of a solid half dozen.”
What’s wrong with the U.S. foreign policy establishment? Here are two examples from my own experience:

The briefer, one Arnold M. Isaacs, replied haughtily, “I am describing the policy of the United States.”

And Mr. Isaacs, whom I met in Guatemala in 1980, is still going strong in the State Department. Today he’s in Foggy Botton itself at the State Department’s Board of Examiners, interviewing and evaluating people who have applied to join the Foreign Service.

Two conservative presidential landslides later, little is changed in the minds of many Foreign Service officers. For instance, the economy of endangered El Salvador is crippled by so-called “land reform” and the nationalization of the banks and export industry. Until these steps are reversed, that country will remain an economic basket case. But the State Department does not push for re-privatization of the productive sectors of that economy.

It is true that in six years many Central and South American countries have passed from authoritarian to democratic governments. But the pattern is clear. The stronger the State Department influence in a country in transition to democracy, the more certain that the election will be won by the left-most major candidate.

El Salvador, Guatemala and Honduras are cases in point. With respect to their ability to lead their countries to long-term political and economic freedom, the State Department’s favorite new leaders in these countries look more like Alexander Kerensky than like Konrad Adenauer.

2. My second example. While on President Reagan’s staff, I was Project Officer of the White House Outreach Working Group on Central America. The group’s purpose was to generate public support for the President’s anti-communist policies in Central America. I found the power of the State Department and many career officers from other Federal Agencies in opposition to most proposals for effective actions.

For instance, the President’s pollster, Dr. Richard Worthlin, conducted a nationwide survey for us. Our aim was to find the issues which would generate the most support for the President’s Central American policy.
One issue stood out sharply in the poll results. And it was not democracy. That’s reasonable. Very few Americans would be willing to die, or even to spend huge sums, to ensure honest elections in Chicago. Why should we expect public enthusiasm for sacrificing American treasure, or perhaps American lives, to guarantee honest elections in foreign countries?

The poll covered other issues, among them:

The poll showed none of these issues of overriding concerr-to American voters.

The one issue pollster Worthlin found most exciting to Americans was the predictable rush to the U.S. of additional millions of refugees from Central America. This will surely happen if communism takes more countries south of our border. That prospect proved to be of great concern for 82% of the national sample.

“Ah,” I thought, “here is how we can win the support the President needs.”

I had previously initiated a new concept called White House Digests, informational papers we issued directly from the White House Outreach Working Group on Central America, rather than from the State Department.

So my office prepared a thoughtful paper about the real problems of homes, jobs and social services to be faced by new millions of refugees. These people would inevitably come north to the United States as the Sandinista’s self-proclaimed “revolution without borders” spread.
All but one of the several Federal departments and agencies participating in our working group approved our paper for release. But the one exception prevailed. The State Department vetoed the draft paper, calling it “xenophobic.”

So we revised the paper, pouring in quarts of the milk of human kindness, discussing the personal tragedies for refugees: abandoning their homes and enduring unspeakable deprivations and dangers as they would flee for haven in the U.S.

We produced a third draft, with the same effect.

After I left the White House Staff in early 1984, the paper on refugees went through two additional redrafts. In all, five drafts. The paper has not been published to this day. And the President still struggles to get support for even the half measures now proposed for Contra aid.
Any knowledgeable conservative observer could cite dozens of other instances of the State Department establishment’s weighing in against a winning foreign policy:

Surely the State Department has been less affected by the 1980 and 1984 elections than any other important Federal department or agency.

The defiance by the permanent State Department of presidential election results is implemented in many ways. One of the least known and most effective is the selection of U.S. ambassadors to foreign countries.

During the Reagan Administration, about two thirds of all ambassadors are foreign service careerists. The one third who are citizen ambassadors are almost always men and women with close ties to the President.

But let me here reveal a secret.

Of course, the White House picks the citizen ambassadors, one third. But hardly any American knows who picks the other two thirds.

The truth is that, by an articulated if not written agreement, the White House allows the State Department to pick all the career ambassadors who will then be nominated by the President. That’s quite a chilling worry for any pro-Reagan careerist tempted to buck the liberal establishment.

Politically appointed, often strongly conservative ambassadors tend to be sent where they can have little effect. Sometimes they are sent to major allies, such as France or the Court of St. James’s, where Foggy Bottom always controls dozens of ongoing bi-lateral exchanges. More often they are sent to small, placid countries, such as the Bahamas or Luxembourg.

But a country such as Chile, in which the East-West struggle is intense, gets career Ambassador Harry G. Barnes, Jr. and an equally leftist, equally competent Deputy Chief of Mission George F. Jones. Neither of them ever took to heart Ambassador Jeanne Kirkpatrick’s work on “Dictatorships and Double Standards.”

Barnes and his deputy treat the anti-communist government of Chile more as Jimmy Carter treated Somoza’s Nicaragua, than as the United States treated Franco’s Spain. The results of Ambassador Barnes’ policy may one day be a Chile more like Sandinista Nicaragua than like democratic Spain today.

To a high degree, U.S. foreign policy is controlled and conducted by an unelected, self-perpetuating, liberal bureaucracy, militantly unresponsive to national election victories of conservatives.

These entrenched bureaucrats act routinely as if it were possible to make friends of our enemies by making enemies of our friends.

Is it any wonder this bureaucracy cannot develop a winning foreign policy?

Decade by decade, the map grows more-red as the U.S. foreign policy establishment keeps us desultorily on the defensive and allows the Soviets to choose their best targets of opportunity.

The Soviets, of course, are by doctrine always on the offensive. They trumpet the inevitability of their continuing territorial advance through “scientific socialism.” Their so-called scientific socialism can be ufftrally defined as the empirical study of how to accumulate and keep power.

What can we oppose to this systematic encroachment? Can the United States have a winning foreign policy?

I believe so. But, like the building of the current strength of our U.S. conservative movement, it won’t be easy.

Here in bare outline are some steps which should be taken toward that end:

Can the U.S. have a winning foreign policy? The Soviets know we can. And they are afraid of our capability.

Consider this: Why are there virtually no Marxist terrorist bombings now in the United States? Why are U.S. anti-communist political leaders not assassinated routinely in our streets, as in so many other countries?

Is it because the Soviets have scruples against such actions? No.

Is it because they lack explosives or lack willing agents or surrogates? No.

Is it because we could catch all their agents or close our borders to infiltration? No.

The reason is this: A wave of Marxist-Leninist terrorism in the U.S. now would be counter-productive for the Soviets. And they know it. Before long the question in our Congress would not be whether to aid the freedom fighter Contras, but how much help we could give them and how quickly we could send it.

Then our attention might be directed toward other Soviet empire vulnerabilities, starting with places like Mozambique, Angola, Guyana, Cuba and so on.

And even the State Department bureaucracy might then fail to confuse us as to the best ways to advance the cause of freedom in the world.

by Morton C. Blackwell To the Philadelphia Society in Toronto, Ontario, Canada September 20, 1986