Home Keep Up Health & Pandemics Chart of the Day: Mass Covid Lockdown Protests – What is Happening... 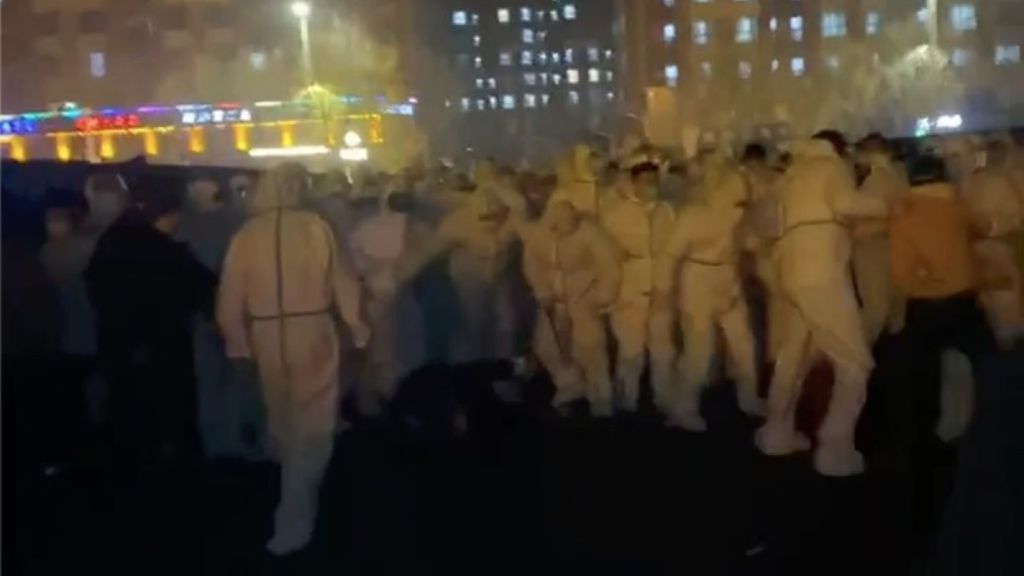 What is happening in China?

Protests have erupted in Beijing and the far western Xinjiang region over COVID-19 lockdowns and a deadly fire on Thursday in a high-rise building in Urumqi that killed ten people (with some reports putting the number as high as 40).

Reuters verified that the footage was published from Urumqi, where many of its 4 million residents have been under some of the country’s longest lockdowns, barred from leaving their homes for as long as 100 days.

In the capital of Beijing, 2,700 km (1,678 miles) away, some residents under lockdown staged protests or confronted their local officials over movement restrictions placed on them, with some successfully pressuring them into lifting them ahead of schedule.

See a few videos below that show these unusual protests in China.

People are chanting ‘stop lockdown’ ‘we are human being’ pic.twitter.com/trQhDSZLXr

On Nov 23, when a fire broke out in #Urumqi , people’s doors were locked from outside. Fire truck couldn’t get closer either( see my previous tweet). The latest figure says 44 were burnt to death, including a 3 y/o kid. That’s one of the reasons for today’s protests. pic.twitter.com/s4E0JHk4wQ

Protests in China are very unusual, as the Chinese Communist Party (CCP) typically enforces its edicts with extreme force. There is no doubt that the CPP will be worried that these protests could get out of control, spread, and metastasize into something more significant.

BBC – Thousands of protesters have turned out in Shanghai, where the BBC has seen people bundled into police cars. Students have also demonstrated at universities in Beijing and Nanjing. The latest unrest follows a protest in the remote north-west city of Urumqi, where lockdown rules were blamed after ten people died in a tower block fire.

During Saturday night’s protest in Shanghai – China’s biggest city and a global financial hub in the east of the country – people were heard openly shouting slogans such as “Xi Jinping, step down” and “Communist party, step down.” Some held blank white banners, while others lit candles and laid flowers for the victims in Urumqi.

Such demands are an unusual sight within China, where any direct criticism of the government and the president can result in harsh penalties. See a BBC video report below.

But why are the Chinese so obsessed with Covid lockdowns? Do they know something about the Covid virus that we don’t, to be so frightened? Are the Covid lockdowns based on medical science or about covering up other potential problems? Below are charts that show just how bad the Covid “pandemic” is in China – if you can believe their numbers.

It appears that, indeed, in China, Covid new cases have been at the highest ever since the “pandemic” started. However, the new deaths have not – not even close. Do these Covid statistics make the Chinese zero-tolerance policy for Covid justified for these rigid lockdown policies?

These massive lockdown effects have plunged the Chinese economy is in a downward trend. How serious of a downward economic trend remains. See here a report from China on their current economic situation. See the current forward-looking Chinese PMI and business activity expectations in the charts below and learn more here and here.

A Reuters poll forecasted China’s GDP growth to slow to 3.2% in 2022, far below the official target of around 5.5%, marking one of the worst economic performances for China in almost half a century. However, the Chinese economy is not falling off a cliff yet. If the Covid lockdowns are to hide economic woes – what do they know about their economy that they are not telling us?

Emblematic of China, see below a chart of the great unwind – learn more here. A look at the MSCI China index and its performance relative to the world gauge is very telling. The ratio is sitting right back where it was before China took off in the lead-up to 2008.

The Chinese economy, much as it is in many other countries (including the US), is trending downward as the global economy faces a potential massive recession. The question remains, are the Chinese Covid lockdowns a mechanism to hide the reality of a massively sinking Chinese economy? Or is there a severe pandemic health problem in China?

Either way, China is in panic mode. Why? To have such useless draconian lockdowns seems to be hiding something even bigger. What? Give us your take on why the severe China Covid lockdowns are occurring in the comment section below.