Home Policy Congress Chart of the Day: Will Kevin McCarthy be the Next Speaker of... 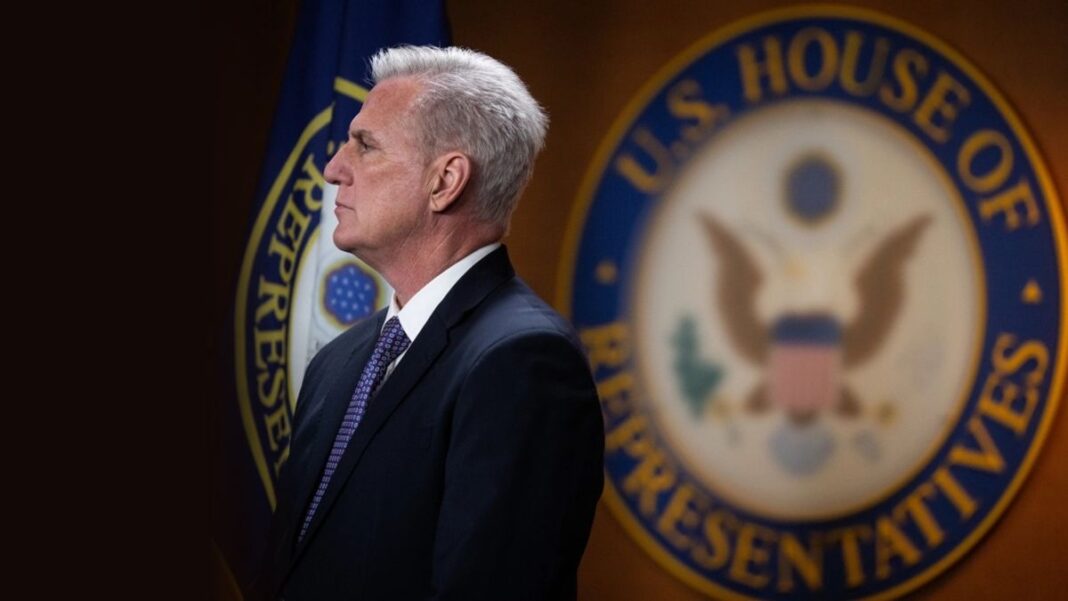 Republicans, after the 2022 midterm elections, hold a slim majority in the House – 222 for Republicans and 213 for Democrats. Republicans would earn the all-important position of Speaker of the House, which can weld considerable power.

Kevin McCarthy is the current leading contender for the post. It’s still far from certain that McCarthy will be elected on the first ballot, or even at all. Kevin McCarthy will need nearly every GOP Representative’s votes to secure the position. McCarthy is working with the slimmest majority for a first-time speaker since John Nance Garner in 1931.

Five Republicans – Reps. Andy Biggs of Arizona, Bob Good of Virginia, Matt Gaetz of Florida, Matt Rosendale of Montana, and Ralph Norman of South Carolina – have publicly broadcast plans to vote against McCarthy on January 3rd. The five have organized as a bloc and vowed McCarthy can’t peel them off individually; any concessions he offers would be debated among all five. See a few of their statement below.

I don’t see any scenario where I’d support Kevin McCarthy as House Speaker.

McCarthy has a track record of cutting backdoor deals with Democrats. pic.twitter.com/UzUz67yd7K

I'm not voting for Kevin McCarthy for Speaker because he's just a shill of The Establishment.

The reason most of my Republican colleagues are supporting him is because they benefit from the redistribution of lobbyist & special interest money from McCarthy to their campaigns. pic.twitter.com/bdJmjwy6W7

McCarthy trying to gain support, said he would agree to lower the threshold by which rank-and-file members can force a vote to depose a sitting speaker. The internal horse trading (e.g., memberships on committees, etc …) for sure are causing the telephone wires to burn.

Some demands include a commitment that House leadership will not work to defeat them in party primaries. Meanwhile, the Freedom Caucus has asked for rule changes that include:

McCarthy’s concessions to some Representatives have not entirely worked. Nine GOP Representatives who’ve yet to commit to McCarthy issued a statement saying that, while it represented “progress, Mr. McCarthy’s statement comes almost impossibly late to address continued deficiencies ahead of the opening of the 118th Congress on January 3rd … there continue to be missing specific commitments with respect to virtually every component of our entreaties.”

This will be a moving target – see here.

What has been the past history of contested Speaker of the House elections?

The House has elected a Speaker 127 times since 1789 – see a list of all of them here. In the modern era, the Speaker is elected at the beginning of the new Congress by a majority of the Representatives-elect from candidates separately chosen by the majority- and minority-party caucuses. In cases of an unexpected vacancy during a Congress, a new Speaker is elected by a majority of the House from candidates previously chosen by the majority and minority parties.

There have been 14 instances of Speaker elections requiring multiple ballots. Thirteen of 14 multiple-ballot elections occurred before the Civil War when party divisions were more nebulous. The last time a Speaker election required two or more votes on the floor happened in 1923. See this in the table below and learn more here.

So this January 3rd election day for the Speaker of the House could set off some political fireworks – something we haven’t seen in almost a century. If McCarthy does not win, at least on the first ballot, this could weaken his position as he will need to negotiate even more of his power away from himself. Alternative candidates are in the wing, including having Democrats get into the fray to extract favors to support a compromise.

Give your take on what might happen – will we have a Speaker McCarthy on January 3rd?