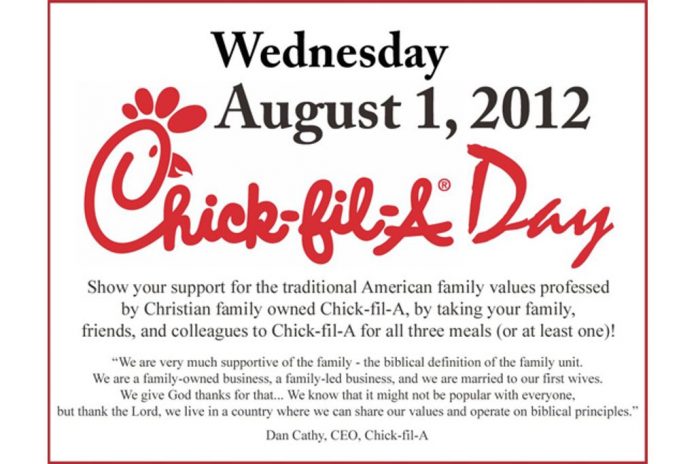 I’m going to skip Wednesday’s Chick fil-A Appreciation Day, not because I don’t appreciate it, but I have never gotten excited about economic boycotts or counter-protesting with my diet. I’m consistent that way—I ignored Martin Sheen when he stood outside my local grocery trying to stop me from buying grapes and, if I skipped a Jane Fonda movie, it wasn’t because she had gone to Hanoi during the Vietnam War. As college endowment managers learned, it’s pretty difficult to get all your principles and politics lined up with your investment portfolio, much less with your diet or entertainment.

Still, Chick fil-A Appreciation Day is a useful moment to chew over more than just a chicken sandwich. On the surface it’s about company president Dan Cathy’s support for his understanding of Biblical marriage (one man and one woman for life) and attempts by supporters of gay marriage to boycott it or, in the case of certain politicians, even try to prevent its stores from locating in their districts. But at a deeper level, the Chick fil-A controversy underscores the growing dilemma over Christianity and democracy in America.

Increasingly loud voices argue that there is no longer room for Christianity—or at least fundamentalist or evangelical Christianity—in the American public square. Why? Because such conservative forms of Christianity are not themselves democratic– their principles are not put to a popular vote and therefore do not change much over time. Mr. Cathy is not so much expressing his own personal view about marriage as he is articulating what he understands the Bible to say about marriage, a teaching he does not feel free to ignore or change. In the view of evangelical Christians, Christianity is not a democracy and God does not take votes to decide policy or doctrine. It is what God said it is in the Bible.