“This is a major legal victory for children, parental rights, and informed consent,” said Rolf Hazlehurst, senior staff attorney for Children’s Health Defense (CHD) who argued the case. “Government overreach such as this has dire implications for children’s health and the constitutional rights of citizens.”

The D.C. Minor Consent for Vaccination Act of 2020, allows children eleven years of age and older to consent to vaccinations without their parents’ knowledge or consent. The law specifically targets children whose parents have religious exemptions for their children. The D.C. Act contains several provisions designed to deceive parents and hide the fact that their children have been vaccinated against their parental judgment, authority or religious convictions.

CHD and Parental Rights Foundation filed a lawsuit in the U.S. District Court for the District of Columbia, seeking a court order to declare the D.C. Minor Consent for Vaccinations Amendment Act of 2020 unconstitutional. Plaintiffs, (Booth, et al.) are four parents of minor children who attend public school in Washington, D.C. Oral arguments were heard on March 3, 2022.

In the opinion issued on Friday, March 18, the court found the parents likely to succeed on the merits in their arguments that the D.C. Act is unconstitutional for two reasons. First, the D.C. Act is preempted by federal law because it directly contradicts the National Childhood Vaccine Injury Act of 1986. The D.C. Act also violates the right to free exercise of religion guaranteed by the First Amendment to the Constitution.

Hazlehurst argued that the District has created a “pressure-cooker environment, enticing and psychologically manipulating [minor children] to defy their parents and take vaccinations against their parents’ will.”

The Plaintiffs overcame a high legal hurdle that “threatened injury must be certainly impending” as established by the U.S. Supreme Court precedent  Clapper v. Amnesty Int’l., in part by the use of a drawing entitled “Peer Pressure,” drawn by one of the plaintiff’s children. The drawing depicts the dilemma children face at school when they do not want to get the COVID vaccine or have been advised by their parents not to take the shot.

“This preliminary injunction is part of ongoing litigation in an extremely important national precedent-setting case,” said Hazlehurst. “The rights of parents to decide what is best for their children’s health is at stake. Government can’t be allowed to make such decisions for minor children.” 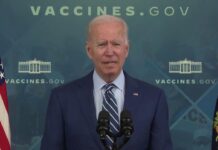