In the bestselling but controversial new book “The Hundred-Year Marathon,” author and former Pentagon official Michael Pillsbury argues that China is angling to replace the United States as a global superpower. Chief foreign affairs correspondent Margaret Warner interviews Pillsbury about what he thinks the U.S. can do to counteract the “secret strategy.”

Michael Pillsbury is the director of the Center on Chinese Strategy at the Hudson Institute and has served in presidential administrations from Richard Nixon to Barack Obama. Educated at Stanford and Columbia Universities, he is a former analyst at the RAND Corporation and research fellow at Harvard and has served in senior positions in the Defense Department and on the staff of four U.S. Senate committees. He is a member of the Council on Foreign Relations and the International Institute for Strategic Studies. He lives in Washington, D.C. 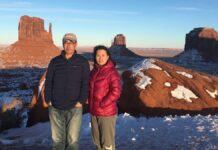