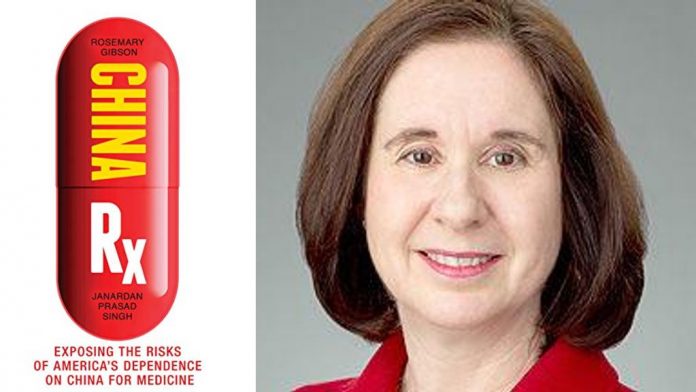 Millions of Americans are taking prescription drugs made in China and don’t know it–and pharmaceutical companies are not eager to tell them. This is a disturbing, well-researched wake-up call for improving the current system of drug supply and manufacturing. Several decades ago, penicillin, vitamin C, and many other prescription and over-the-counter products were manufactured in the United States. But with the rise of globalization, antibiotics, antidepressants, birth control pills, blood pressure medicines, cancer drugs, among many others are made in China and sold in the United States.

China’s biggest impact on the US drug supply is making essential ingredients for thousands of medicines found in American homes and used in hospital intensive care units and operating rooms. The authors convincingly argue that there are at least two major problems with this scenario. First, it is inherently risky for the United States to become dependent on any one country as a source for vital medicines, especially given the uncertainties of geopolitics. For example, if an altercation in the South China Sea causes military personnel to be wounded, doctors may rely upon medicines with essential ingredients made by the adversary. Second, lapses in safety standards and quality control in Chinese manufacturing are a risk. Citing the concerns of FDA officials and insiders within the pharmaceutical industry, the authors document incidents of illness and death caused by contaminated medications that prompted reform. China Rx is a probing book that examines the implications of our reliance on China on the quality and availability of vital medicines.

“A must-read for everyone who takes, makes, regulates, or sells a prescription drug or an over-the-counter medicine. China Rx is a heroic and critical exploration into one of the greatest threats to both our national and health securities. China literally holds the health of much of the world in its business-driven hands. This is scarier than a Stephen King novel. —Michael T. Osterholm, Regents Professor, University of Minnesota, and author of Deadliest Enemy: Our War against Killer Germs

“In this alarming exposé, Gibson and Singh explain why the fact that the U.S. no longer makes penicillin and China supplies most of the ingredients in today’s prescription drugs is such a big problem and a threat to national security…. Readers will want to do more due diligence on the provenance of the drugs in their home medicine cabinets.” —Booklist

“China Rx describes a major threat to the strategic position of the United States in the world, a matter affecting this country’s health and its economic and social well-being. This book reveals how the loss of the manufacturing capability and control of the supply of critical medicines, and their component ingredients, endangers the medical future of the American public while also posing a serious threat to our economy as well. The authors prescribe what must be done to remedy this major deficiency in our nation’s public health infrastructure. —Edwin Meese III, 75th United States attorney general

“China Rx exposes the scary truth that a great number of prescription drugs and over-the-counter medicines in the United States have ingredients from China. There should be tougher import standards, a requirement for pharmaceutical companies to label a drug’s origins, and a reversal of US dependence on China.” —Jim Guest, former president, Consumer Reports

“Everyone who has ever taken a pill needs to read this book. The American people won’t be happy when they find out that many of the medicines they rely on are being made in China where regulations aren’t enforced and/or documents are falsified.” —Leo W. Gerard, international president, United Steelworkers

“Rosemary Gibson and Janardan Prasad Singh do an outstanding job of guiding the reader through the inherent risk to the United States to become dependent on any one country, such as China, as a source for vital medicines, and the risks from weak enforcement of safety standards and quality control by foreign manufacturers.” —Maj. Gen. Larry J. Lust, US Army (ret.)

“A compelling book that reveals America’s troubling dependence on China for essential medicines and the pattern in US-China trade where intellectual property and value-added production are shifted to China to the detriment of US workers, businesses, national security, and the health of our citizens.” —Daniel Slane, commissioner, US-China Economic and Security Review Commission

“The authors tell how the institutions we trust have sold out to China and thrown American patients under the bus! As a quality professional, I am appalled that so many people care more about cost than the quality of our medicines. China Rx would make a great suspense thriller movie.” —Martin VanTrieste, former chief quality officer, Amgen

Rosemary Gibson has been credited with creating national movements for safer, more humane health care. Her first book, Wall of Silence, with co-author Janardan Prasad Singh, put a human face on medical mistakes, launching a national campaign to improve the safety of America’s health care. Gibson worked with Bill Moyers on the PBS documentary On Our Own Terms. She is a recipient of the Lifetime Achievement Award from the American Academy of Hospice and Palliative Medicine and is also the founding editor of a narrative series in the Journal of the American Medical Association (JAMA) Internal Medicine. She is senior advisor at the Hastings Center and the 2014 winner of the highest honor from the American Medical Writers Association. She is also the author, with Janardan P. Singh, of three other books on health care.

Janardan Prasad Singh is economic advisor at the World Bank. He designs strategies to strengthen economic development, health care, global trade, and national security for countries around the world. He has served as an advisor to prime ministers of India on national security affairs. Formerly, he was a member of the Board of Contributors of the Wall Street Journal.