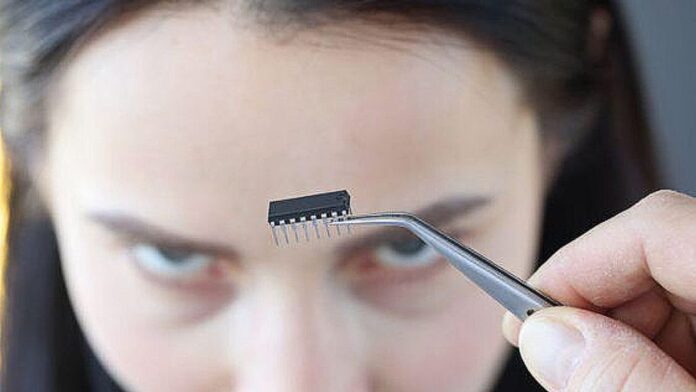 Elon Musk doesn’t just want to heal the sick by jabbing chips in their skulls. His biggest bet is on enhancing the human race.

“To some degree we are already a cyborg…your phone, your computer, the applications you have,” he told Dubai’s royalty at the World Government Summit in 2017. “Over time I think we will probably see a closer merger of biological intelligence and digital intelligence. … It’s mostly about the bandwidth, the speed of connection between your brain and the digital extension of yourself. Particularly output.”

Presently, that digital connection is limited to our fat thumbs tapping the wrong letters on touchscreens. But not for long. In the coming years, some number of people will be dogged by an autocorrect inside their heads.

A few days before Time magazine and the Financial Times both declared Musk “Person of the Year,” the world’s richest man suggested his Neuralink chip would be stuffed into human heads by 2022. Quadriplegics will have their brains laced with hair-thin wires—a thousand per chip, each powered by artificial intelligence—so they can operate digital devices with their thoughts alone. But the experimentation won’t stop there.

Musk’s stated intention—along with many other tech magnates, government bodies, and global forums—is to use neuroprosthetics for human enhancement. The ultimate goal is to fuse man with machine to allow total control. The question is, as always, which direction the control will ultimately go.

Already, there are thousands of people with digital implants in their brains for various purposes. For decades, neuroprosthetics have been used to treat Parkinson’s disease, epilepsy, depression, and more recently, to allow amputees and paralytics to translate thought into text or control robotic limbs. Promising experiments are underway to treat memory loss and restore cognitive function. It’s an open question how long it will be before chips are used to enhance memory and cognition, but things are moving fast.

In 2014, after an implant trial to treat depression failed regulatory requirements, one of the successful cases wrote an op-ed for WBUR in Boston:

The surgery took place on 6/6/06 – an awful date, but no matter. The week before, I had cut my wrist. … Today, I view my depression not from a place of fear, more from a place of conquest. I conquered it, I beat, and I am better for it. If I am being honest, some days I miss it.

Using electromagnetic stimulation to alter the fabric of one’s being is indeed “conquest,” but not necessarily on the part of the patient. It represents the triumph of technology over human nature. The brain-computer interfaces developed by Neuralink, Synchron, and Blackrock Neurotech are poised to dominate.

Last July, the FDA approved Synchron to start trials on their brain-computer interface, Stentrode, designed to control digital devices. The floodgates were opened.

The week before, a neuroscience team at the University of California, San Francisco announced that their implant now allows a stroke victim to type text onscreen by simply thinking about the words. The experiment was funded by Facebook, with BCI hardware provided by Blackrock Neurotech. “34 people around the world have an implanted brain-computer interface,” their website declares. “31 of them use Blackrock technology.”

In October, one of those patients was lauded by MIT Technology Review as an early “merger of humans and AI” in an article entitled, “Brain implants could be the next computer mouse.” The lead scientist on the project, Krishna Shenoy of Stanford University, told the interviewer:

“The field was un-investable until Elon entered. That is what sent shock waves through the venture capital world. … Now there are nearly infinite resources.”

Shenoy, who is a paid consultant to Neuralink…is opposed to consumer brain implants: he worries about everything from their impact on inequality…to the consequences of directly linking people’s brains to social media. But he has made a Faustian bargain.

One of the uses of therapeutic brain-computer interfaces is video games, as seen with Pager, the famous macaque who uses two Neuralink chips to play Pong. In fact, Neuralink’s former president, Max Hodak, looks forward to an era when AI-powered electrodes connect the brain directly to the Metaverse:

“It could just be a computer screen that looks as solid as any ever has, and it’s just floating in front of you,” he says. “When your eyes are open, you would see the world of atoms. When you close your eyes, you see the world of bits.” Hodak thinks that in a generation, children will be “baffled when we tell them that there used to be just nothing there when we closed our eyes.”

Transhumanism is the issue of our age, and it doesn’t matter if old folks reject it as a disgusting abomination. The kids will love it, blissfully indifferent to the perils.

From Apes to AI

Tech billionaires aren’t the only people taking human-AI symbiosis seriously. In 2019, The Royal Society of London published “iHuman: Blurring lines between mind and machine.” While the authors acknowledge the potential for dystopic abuse, their tone is enthusiastic. These ivory tower eggheads are enthralled by the idea of “linking the cognitive power of the human brain to the processing power of machine learning and supercomputing”:

As stated in an article published in the Journal of the Royal Society Interface, “Brains are flexible, imprecise, error-prone, and slow; computers are inflexible, precise, deterministic, and fast.”…

Linking human brains to computers using the power of artificial intelligence could enable people to merge the decision-making capacity and emotional intelligence of humans with the big data processing power of computers, creating a new and collaborative form of intelligence. People could become telepathic to some degree, able to converse not only without speaking but without words—through access to each others’ thoughts at a conceptual level. Not only thoughts, but experiences, could be communicated from brain to brain. …

Interfaces offer benefits that are as unimaginable today as the smartphone was a few decades ago. Better health. Better memory. Better concentration. … A more collaborative world.

One imagines an electrified beehive of professors sitting in a conference room, all nodding in unison to some ridiculous theory or another. Except for the dead silence, occasionally broken by a cough or burp, you’d hardly know the difference from academia today.

Without blinking, the authors point out a troubling program already underway, funded by Facebook:

Researchers linked to the Chan Zuckerberg Initiative have reported successful trials of [a device] implanted in a monkey to record, stimulate, and modify its brain activity in real time, including sensing an expected movement and stopping it immediately.

The Ludovico Technique from Anthony Burgess’s novel A Clockwork Orange seems primitive in comparison. In the defense industry:

Animal tests have already shown ways to create memories, control motion by human thought, or embed learning. Interface technology will also inevitably be studied for potential military applications, such as augmenting decision-making, physique, and motivation. In research, sharks, beetles, and pigeons have been implanted with devices that can control their movements.

Unless these scientists plan to hold remote-controlled rat races, human beings are next. The key questions are “Who?” and “For what purpose?”

There’s a War on For Your Brain

The potential for top-down technocratic control should be obvious. Militarized superpowers love that concept. Until Elon Musk started pumping cash into brain-computer interface projects, the U.S. Defense Advanced Research Projects Agency (DARPA) had been the primary funding source of BCI, going back over six decades. The foundational paper “Man-Computer Symbiosis,” published in 1960, was conceived by J.C.R. Licklider, one of DARPA’s original beneficiaries.

Fast-forward to May of 2021, and the UK’s Ministry of Defense publishes the stunning position paper “Human Augmentation – The Dawn of a New Paradigm.” The strategic implications should be familiar:

This principle is evident in the AI arms race between the US and China. Ex-Google CEO Eric Schmidt, who chaired the US National Security Commission on Artificial Intelligence, has been a hawk on this since his commission’s report was published in March of this year.

Of all the disturbing elements in the UK Ministry of Defense human augmentation paper, the juxtaposition of the following paragraphs should hit you like a bad batch of Covid vaccines:

There may be a moral obligation to augment people, particularly in cases where it promotes well-being or protects us from novel threats. It could be argued that treatments involving novel vaccination processes and gene and cell therapies are examples of human augmentation already in the pipeline. … The history of vaccinations demonstrates how proven, and seemingly uncontroversial human augmentation technologies can take many years to become globally effective and accepted by societies.

Joe Allen writes about ethnic identity, transhuman hubris, and the eternal spiritual quest. His work has appeared in The Federalist, ColdType, The American Thinker, The National Pulse, This View of Life, The American Spectator, IBCSR: Science on Religion, Disinformation, and elsewhere. Follow him @JOEBOTxyz and www.joebot.xyz.