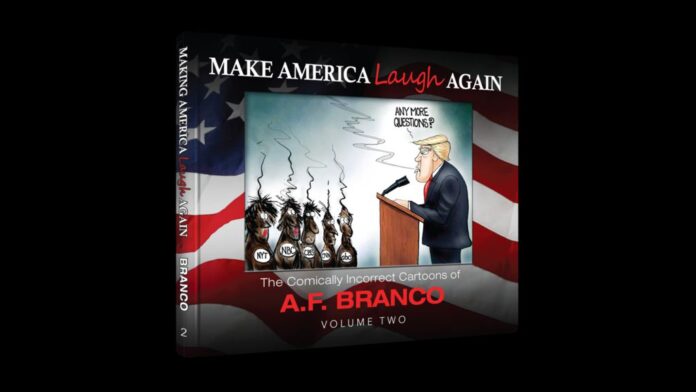 “I am not a writer; I am a cartoonist. Okay, so maybe I was drawing and doodling in class when I should have been focusing on other things, like creative writing, but it has brought me to where I am now: combining two of my passions art and politics.”

In Comically Incorrect, “I presents a portion of my political perspective, one which I believe is shared by many Americans. This collection serves to make you laugh, make you think, and to help remind you that the things that made America great are being challenged but they are still worth fighting for.” ~ Antonio Branco, conservative artist and cartoonist

Keep America Laughing at the Left: The Comically Incorrect Cartoons of A. F. Branco – Volume 3

If you need a little comic relief from the current depressing political scene, there’s no better way than immersing yourself in A.F. Branco cartoons.

A.F. Branco describes himself as somewhere between the Far Side and the right side of every issue. He sits at his desk daily crafting comically and politically-incorrect cartoons that say with humorous satire what conservatives really think, but lack the opportunity to say to a broad audience. After years of listening to the squeaky wheel of the left advancing the cause of radicalism, Branco decided to use the power of his bully palette to advance the conservative movement. Conservatives worldwide can be glad he did. According to Branco, The art and humor of political cartoons has since the dawn of the Republic been a way to sway those who might not otherwise be persuaded.

As a political cartoonist, A.F. Branco joins a long line of notables who have used humorous satire to drive in the nail without breaking the board on political issues. There is something about the human psyche that makes humor an effective means often the most effective means of making a point, revealing political hypocrisy, or pointing out falsehoods. The most famous political cartoonist of them all, Thomas Nast, helped bring down the corrupt Boss Tweed organization that had long controlled and manipulated New York politics. His razor-sharp satire and ability to create contextual allusions turned out to be more powerful than even the once all-powerful Boss Tweed. But even before there was Thomas Nast, there was Benjamin Franklin, America s first political cartoonist. Franklin s Join or Die cartoon in which the severed parts of a snake depict the original colonies is widely acknowledged as the first political cartoon in America.

First there was Franklin. Then there was Nast. Now there is Branco. A.F. Branco is the latest rising star in a long line of political cartoonists, and his work already surpasses some of the giants in the business. I encourage readers to enjoy his creative and humorous satire and to spread the word that Branco. At long last we have a conservative political cartoonist whose sharp mind, able pen, and incisive wit counteract the destructive falsehoods, distortions, and manipulation of the left-leaning mainstream media. Branco is a surgeon and his pen is his scalpel, an instrument he wields with laser-like precision in cutting through the philosophical morass of liberal orthodoxy. 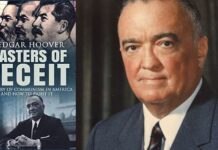 Masters Of Deceit: The Story Of Communism In America And How To Fight It