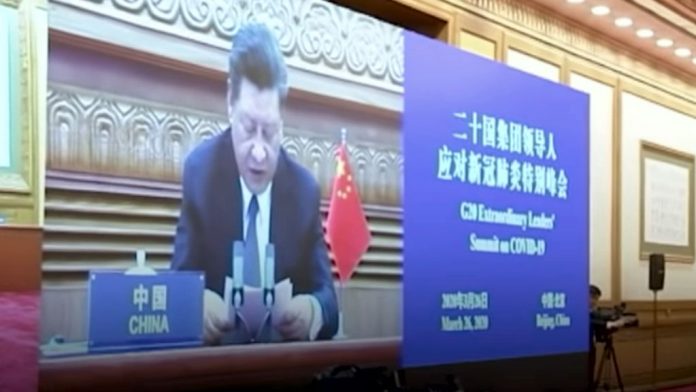 Remember when Chinese paramount leader Xi Jinping closed the doors to the Middle Kingdom to all foreigners, and America’s liberal opinionmakers erupted with accusations of racism and xenophobia?

Me neither, but it happened: No more foreign devils!

China banned foreign visitors entirely, effective 12:01 am Saturday. For now, the Western finance bros and consultant types who profited from business with the totalitarian regime can’t go kowtow at the Forbidden City. And maybe we should thank Xi, for taking the key step toward disentangling our economy from China’s.

For decades, the United States and other Western powers traded our industrial strength and technology for access to China’s burgeoning markets and cheap consumer goods. Wall Street and a few large firms enjoyed this arrangement, as did American princelings like Hunter Biden, who until October sat on the board of a Chinese fund whose shareholders include many Communist-state-owned enterprises.

The Westerners returned from whirlwind business trips, gushing about the spanking new airports, fast trains, obedient workers and competent bureaucrats. Now these elites, who made China a powerhouse, wait out coronavirus in their Hamptons bunkers. They should use the time to reflect on what engagement with China meant meant: global supremacy delivered to the Beijing regime on a plate, with a “thank you” note.

The Chinese term for “crisis,” weiji, contains the same character as jihui, “opportunity.” The Communist Party is seizing this opportunity by spreading lies and attempting to dominate the coronavirus narrative — from conspiracy theories about the US Army creating the virus to “Go, China!” posters in Italy.

Never mind about America trying to lead the world with the counternarrative of truth. For now, our priority should be to just stop being China’s business colony, dependent on the anti-Western children of Mao Zedong for essentials.

We must bring back production of pharmaceuticals and medical devices, while rethinking our global trade arrangements to prioritize democratic allies in East Asia and elsewhere.

This is a matter of life and death now. Over the last two months, China nationalized foreign mask producers and demanded rock-bottom prices for all medical equipment, creating a shortage in the rest of the world. The industrial conglomerate 3M, for example, saw most of its protective masks built at a factory in Shanghai bought up locally even before the outbreak, and afterward the Chinese gripped and “effectively nationalized” the firm’s capacity, as White House trade czar Peter Navarro put it. This may be a good strategy for China but our country can’t be subject to the Communist Party.

Nels Frye was born in Boston, Massachusetts. He is a business consultant, freelance writer and photographer, and entrepreneur who has lived in Taipei, Hong Kong, Hangzhou, Dalian, Chengdu, Beijing, and Shanghai. Nels Frye developed market entry strategies in industries from fashion to aviation, packaging, and literary copyright protection. He is a history major from the University of Chicago and his interest in China was sparked by reading one of China’s major historical novels, Romance of the Three Kingdoms when he was fourteen.

Nels Frye was Editor-in-Chief LifeStyle Magazine based Beijing from 2009-2015. stylites.net, his street style blog helped him gain international recognition. Stylites.net is considered a valuable source for the trends of Beijingers at the start of the 21st Century. Nels Frye has also worked as an independent consultant, creating exciting collaborations and content for Lacoste, American Rag Cie, The HUB and other clients. Nels served as Lifestyle Advisor for the Four Seasons Hotel Beijing for over three years. Nels Frye has also received invitations to speak on the China media and fashion environments by Corneliani, Benetton, P&G, and H&M.

His latest project is called Pawnstar, which is a resale and vintage shop with a storefront in the French Concession.