Cowboys for Trump cofounder Couy Griffin on Tuesday appealed a decision made by a judge in New Mexico that banned him from seeking or holding state or federal office and removed the official from his position.

Griffin, who was removed from his position as an Otero County commissioner, notified the state Supreme Court on Tuesday of his intent to appeal the ruling by state District Judge Francis Mathew in early September.

In his ruling earlier this month, Mathew found that Griffin took an oath to support the U.S. Constitution when assuming the position and concluded that the Capitol breach was “an insurrection by a mob whose goal … was to set aside the results of a free, fair and lawful election by a majority of the people of the entire country,” and that Griffin “is disqualified from federal and state office for having engaged in that insurrection.”

The ruling marked the first time an elected official has been removed or barred from office in connection with the U.S. Capitol breach and came after three New Mexico residents, represented by the Washington-based nonprofit Citizens for Responsibility and Ethics in Washington (CREW), asked the court to bar Griffin from doing so.

They cited Section 3 of the 14th Amendment, which states that anyone who has taken an oath to uphold the Constitution can be barred from office for “engaging in insurrection or rebellion against the same, or given aid or comfort to the enemies thereof.”

The judge wrote that “Mr. Griffin aided the insurrection even though he did not personally engage in violence. By joining the mob and trespassing on restricted Capitol grounds, Mr. Griffin contributed to delaying Congress’s election-certification proceedings.”

Griffin maintained his innocence throughout the trial and sentencing and stated that he was not aware that the Capitol grounds he entered were restricted. 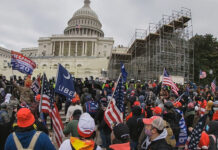