A new study has determined that critical race theory (CRT) concepts are being taught in U.S. schools, despite denials from some individuals or groups.

Zach Goldberg and Eric Kaufmann from the Manhattan Institute commissioned a study on a “nationally representative sample of 1,505 18- to 20-year-old Americans—a demographic that has yet to graduate from, or only recently graduated from, high school,” asking the students whether they were taught in class or heard from an adult at school about four CRT-related concepts.

Of the cohort, 82.4 percent reported having attended public schools.

The four concepts are “America is a systematically racist country,” “in America, white people have white privilege,” “in America, white people have unconscious biases that negatively affect nonwhite people,” and “America is built on stolen land.” Of these, the majority of respondents said they were taught or heard from an adult at school about at least one of the concepts—62 percent, 69 percent, 57 percent, and 67 percent, respectively.

The respondents also were asked whether they were taught or heard from an adult about two gender-related concepts: “America is a patriarchal society” and “gender is an identity choice, regardless of the biological sex you were born into.” Majorities responded affirmatively to both—53 percent and 51 percent, respectively.

The study also asked the students whether they were taught that “discrimination is the main reason for differences in wealth or other outcomes between races or genders” or that “there are many genders, not just male and female.”

“Overall, excluding those who didn’t know, 62 percent were taught that discrimination is the main reason for outcome gaps and a third were taught that there are many genders,” Goldberg and Kaufmann said.

The findings presented have been a preview of the study, and a complete Manhattan Institute report from the study will be published in the upcoming months. 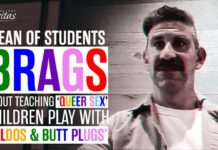