Children’s books should use the art of story to promote morality, teach complex concepts, and introduce the mechanisms by which evil, governments, corporations, and institutions manipulate society. The Cubs to Bears series is designed to operate as an educational tool for parents. Free lesson plans that coincide with each book in the series are available at ClassicalLearner.com.

Children’s books should use the art of story to promote morality, teach complex concepts, and introduce the mechanisms by which evil, governments, corporations, and institutions manipulate society. Good Bears Always Tell the Truth is the story of the time Little Bear was tempted to tell one tiny lie. Of course, the lie becomes bigger, and the contrast between Little Bear’s honesty, and the snakes, weasels, and rats, becomes evident. The Cubs to Bears series is designed to operate as an educational tool for parents. Free lesson plans that coincide with each book in the series are available at www.ClassicalLearner.com. The Good Bears Always Tell the Truth lesson plan instructs children on how to make their own book while prompting them to think about the consequences of lying and benefits of telling the truth. As part of the educational experience children are challenged to organize their thoughts, consider morality, write, and create art. The lesson also provides suggestions that parents can use to teach children marketing and sales.

The Right to Bear Arms

The Right to Bear Arms is a tool designed to assist parents in teaching children about the Second Amendment and constitutional liberties.  It highlights the time Charisma Cat attempted to take over the forest by using tricks, social shame, and manipulation to convince other animals to give up their teeth and claws.  Only the Bears refuse to surrender their arms.  You can guess what happens next.  The accompanying lesson plan challenges children to investigate inconsistencies in the story and provides historical context for the importance of the Second Amendment.

The Bear from Jekyll Island

The Bear from Jekyll Island is a tool designed to assist parents in teaching children about the Federal Reserve banking system.  Georgia Bear was just doing his job when he witnessed the pigs conspire to take over the piggy bank. It wasn’t long until worm, chipmunk, and all of the other animals would fall into debt. Only the Bears turned away the Pigs bank loans.  Then the farm had a drought. You can guess what happens next.  A tribute to G. Edward Griffin’s, The Creature from Jekyll Island, the book introduces children to the history of The Fed, fiat currency, fractional reserve banking, loans, interest, and debt.

Operation Mockingbird and the Church Committee

In the 1970’s the congressional Church Committee revealed pervasive financial ties between the CIA and corporate mainstream media.  Cubs to Bears “Operation Mockingbird and the Church Committee” is historical fiction designed to teach children the congressionally documented history of corporate media corruption and the true story of the first time the American public learned about fake news.  The books highlight’s the story of Red Rooster, who had earned a living reporting the news with daily cock-a-doodle-doos. His life would change forever when he learned the other Roosters had taken bribes to report fake news.

Over the last few years, we have all been forced to re-examine our understanding of “free speech.”  Immensely influential Internet companies have censored some of the most popular and most powerful people in the world. This book follows the story of Stand Up Bear, who is banned from a multitude of platforms. He is accused of “hate speech,” being “anti-bird,” and “against saving puppies,” after he attempted to point out what was really happening at the Saving Puppy Center.

Freedom isn’t free & there is no such thing as a free lunch.  The wild pigs woke up one morning to find out that the local farmers had left some free peanuts for them.  The younger pigs were quick to grab a snack, even after Grandma Pig warned them to never eat free peanuts.  With each passing morning the pigs grew more comfortable eating free peanuts, so comfortable that they walked into a fenced in area.  You can guess what happens next. 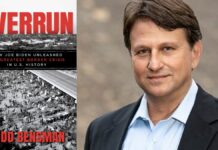