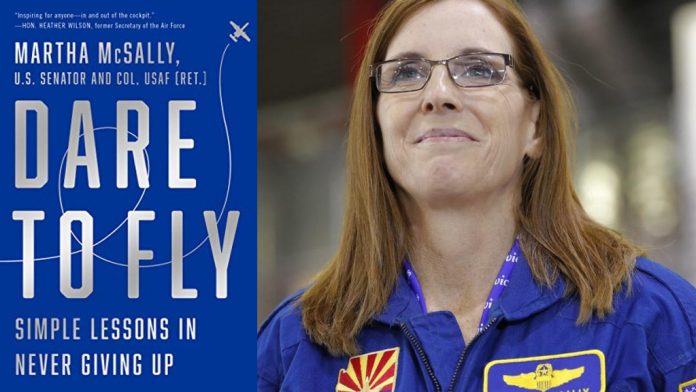 “Like the A-10 aircraft she flew in combat, retired colonel and fighter pilot Martha McSally is a gritty individual who loves our Air Force and personified its core values of excellence, integrity, and service before self, while standing up to make it a better institution for everyone who serves. How to be resolute, do the right thing, persevere, find gratitude, and learn compassion are just some of the lessons in her inspirational life story.” —Ron FOGLEMAN, General (ret.), U.S. Air Force; former Air Force Chief of Staff

Combining the soulful honesty of Make Your Bed with the inspiring power of You Are a Badass, America’s first female combat jet pilot and Arizona Senator Martha McSally shows you how to clear the runway of your life: embrace fear, transform doubt, succeed when you are expected to fail, and soar to great heights in this motivational life guide.

Martha McSally is an extraordinary achiever whose inner strength and personal principles have helped her overcome adversity throughout her life. Initially rejected from Air Force flight school because she was too short, she refused to give up, becoming the first female fighter pilot to fly in combat and the first to command a combat fighter squadron in United States history. During her twenty-six-year military career, she fought to free American servicewomen stationed in the Middle East from restrictions requiring them to don full-body, black abayas and ride in the backs of cars – and won.  McSally has continued to serve America, first in the House of Representatives, and now as a U.S. Senator from Arizona.

McSally is also a survivor. She shares how her experiences propelled her to become a fighter for justice in and out of the cockpit. In Dare to Fly, McSally reflects on her successes and failures, shares key principles that have guided her, and reveals invaluable lessons to break barriers, thrive through darkness, and make someone proud in your life. “Courage isn’t magic or genetics. It is a choice. By choosing to do things afraid, you discover your own power to overcome.”

Filled with fresh stories and insights, Dare to Fly will help each of us find the courage inside to break our barriers, endure turbulence, and keep flying high.

“A well-written, highly-readable personal narrative of overcoming a battery of obstacles to become a genuine American hero. [McSally’s] accomplishments are legendary.” (Washington Times)

Senator Martha McSally proudly represents the people of Arizona in the U.S. Senate and spent four years in the U.S. House of Representatives. A graduate of the U.S. Air Force Academy, McSally served 26 years in the Air Force, retiring as full colonel. She is the first female fighter pilot to fly in combat and first to command a fighter squadron in combat in United States history. McSally deployed six times to the Middle East and Afghanistan and flew 325 combat hours in the A-10 Warthog, earning the Bronze Star and six air medals. She lives in Tucson, Arizona.