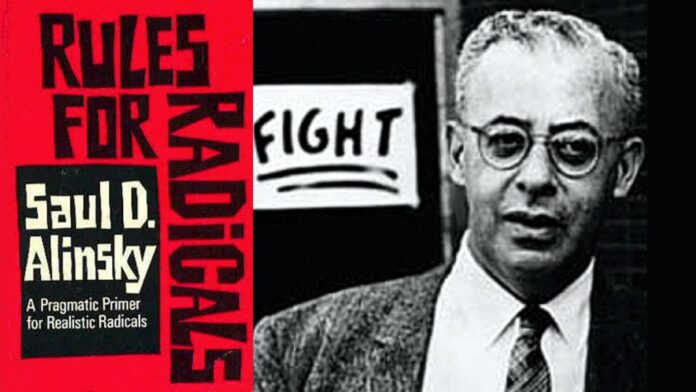 At this critical juncture in the course of our Nation, it is important to recall that when Saul Alinsky wrote his fiendish “how to” manual for the seditious overthrow of a country, he didn’t call it “Rules for the Majority.” Instead, it was the infamous “Rules for Radicals.” His purpose was to instruct a leftist fringe on the strategy needed to dupe the majority population into believing it had no alternative but to roll over and capitulate to the demands of a comparative few.

As we look around us at the post-election America of 2020, we can plainly see that leftists are fully engaged in just such an effort. If real America is to survive this onslaught, it is crucial that we recognize the realities of their duplicity and remain steadfast in our refusal to succumb to them. For if we allow them to succeed, there will be no going back.

The coordinated effort of the leftist Democrat political establishment is also being aided and abetted by the usual cadre of RINO traitors (of course). But while it is widespread and ferocious, its thoroughly predictable nature reveals its inherent weaknesses. It is up to our side to recognize those vulnerabilities and exploit them in order to prevail over the enemy. For starters, any effort at deception becomes that much more difficult to accomplish when its purpose is plainly evident. We know the leftist Democrats, their media lackeys, and the treacherous RINOs seek to deceive us, and we know the nature of their lies. So we don’t have to accept any of it.

The initial Alinsky attacks came in the form of the “universal” prognostications that Biden had “won in a landslide.” America had ostensibly spoken, and it wanted the doddering old fool who didn’t know where he was most of the time. Immediately afterwards came the sanctimonious demands that we instantly accept the unassailable “verdict,” followed by the pernicious accusations that doing anything less would be an affront to the Constitution and rule of law, while desecrating motherhood, and apple pie.

The Alinsky “freeze and isolate” parakeets quickly spread the inane notion by incessant repetition on every possible occasion. Their goal is to marginalize Americans who want fair and honest elections, hoping to shame them into silence. From Reuters came a “poll” claiming that “80% of Americans want President Trump to concede.” An equally “credible” CNN report cites “unnamed sources in the White House” who are allegedly pressuring the President to give up the fight. Adding an element of total absurdity, more of CNN’s “unnamed sources” were supposedly told that First Lady Melania is among those who want the President to surrender.

Of course the hypocrisy of such pronouncements should be dismissed as comical and instantly laughed out of the room. But this is where the RINOs step in. The usual suspects, from Mitt Romney, to Cindy McCain, to the Bush retreads are all salivating for any opportunity to cozy up to the Biden machine. Right along with them is the RINO “Lincoln Project,” which never misses an opportunity to tout itself as “mainstream.” This entire cadre of “Never Trumper” political has-beens still attempts to claim to be the center of the political universe. The disconnect of these people and organizations from America and from reality would be truly sad, were the impact of their efforts not so despicable.

Another major aspect of the set up was the totally transparent effort to force President Trump and his supporters to agree to concession ahead of time. From Chris Wallace’s despicable antics as debate “moderator,” to several other occasions when leftist Fake News minions attempted to pin him down, the goal was always to have a sound clip on record of President Trump advocating a conciliatory stance, post election. Thankfully, he never took the bait. Only a few weeks ago, Rush Limbaugh was queried by Leslie Stahl, as to whether or not he would urge civility from his listeners post election, if Biden were to win. Limbaugh wisely refused to even take the call.

Meanwhile, the Biden camp is very publicly going through all the motions of presuming itself to be the incoming administration. Here again, the impression they hope to create is that “everyone” knows it to be inevitable, except President Trump.

However, it is crucial to understand that it isn’t actually President Trump who they hope to persuade. He knows the reality of the massive corruption which occurred, once the counting “mysteriously” stopped simultaneously in those six swing states. Rather it is the seventy-million Trump supporters (and several million more in reality, if votes are genuinely counted), who need to be sufficiently dispirited. They must be convinced that further efforts against the criminal corruption are futile, and that it is time to “give up” and accept their fate as dictated by the left. At that point, it is President Trump against America.

The consequences of falling for this snare, at any point prior to a full and proper tabulation of legitimate votes (at which time President Trump wins), would be horrendous beyond description. Leftists don’t care how they prevail. And they have no compunction to cede power if found out. The lies on which they advance their agenda are just as “acceptable” in their twisted world as the lies on which their ideology was founded.

On the contrary, if they can seize power while being so blatant about their corruption, the situation signifies the unassailable extent of their power, regardless of all the abuses. And it is for this reason that Americans cannot advocate concession by President Trump, unless they are also willing to concede America itself.