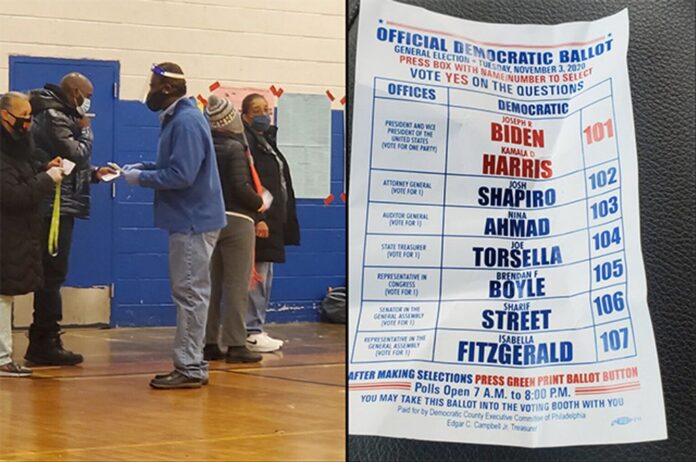 Within minutes of polls opening in the crucial swing state of Pennsylvania, Democrats were reportedly caught illegally electioneering, handing out Democrat voting guides to voters who were in line to vote and blocking GOP poll watchers in the notoriously corrupt city of Philadelphia.

First, they were busted illegally electioneering with giant signs telling people to vote for Democrats on a polling place in Northeast Philly:

There were multiple similar illegal signs:

As we were leaving, they removed this one, but just in case people thought this was an isolated incident, I went by the other polling places in the SAME WARD. #VoterSuppression #Election2020 #Philadelphia #fraud pic.twitter.com/AuWr9eI8o4

Then it was revealed that GOP poll watchers were walled off from the vote counting tables at a vote counting site with “no way to actually observe.”

MORE Bad things happening in Philly. Dem election officials have avoided transparency & accountability at every step. NOW they’re keeping our poll watchers so far from the counting tables there’s NO WAY to ACTUALLY observe. What are they hiding?? THIS MUST STOP!!! pic.twitter.com/r1YlkZokAa

The Philly GOP reported that polling places in Northeast Philly were not opened at 7:00AM as they were supposed to be, forcing people who had to go to work (see: Republicans) to leave.

What the hell is going on in Philly? https://t.co/9Qkf0WtOxI

What a coincidence. My friend, in the Republican part of Pennsylvania just called me. They are standing in line at the polling place that was supposed to open and is still not open. People leaving because they have to go to work. This is the BS we have been warning about.

This is a video of my friend in Northeast Pennsylvania having to wait near an hour after polls were supposed to open. He stayed and voted. #StopTheSteal. pic.twitter.com/lAKx6nHWNc

Disturbing video was released showing a GOP poll watcher being forbidden from entering a polling place despite having proper paperwork:

A poll watcher in Philly was just wrongfully prevented from entering the polling place#StopTheSteal pic.twitter.com/iJTFtRk0Id

ILLEGAL campaigning INSIDE of a polling location in Philly. Man in blue is handing out DEM literature to voters IN LINE TO VOTE. This is why DEMS are keeping TRUMP WATCHERS OUT. They are STEALING it! This needs to STOP! pic.twitter.com/qnJ3D8o2ie

A Democratic committeewoman in north Philly was filmed wearing a Biden mask and reportedly would not let GOP poll watchers into a polling place.

Oh look! A Democratic committeewoman in north Philly wearing a Biden mask not letting certified Republican poll watchers into a polling place… She ends with “that rule ain’t worth being followed” when someone says they should be allowed inside. pic.twitter.com/7646fTi2in

Pennsylvania Attorney General Josh Shapiro (D), who announced on Saturday before a single vote had been counted that Joe Biden was going to be the winner of the election, was lambasted by Richard Grenell for “weaponizing his office against his opponents” by “characterizing Republican poll workers as a form of [voter] intimidation.”

Characterizing Republican poll workers as a form of intimidation is outrageous.

Shapiro is weaponizing his office against his opponents. https://t.co/wGzNJwoNeV