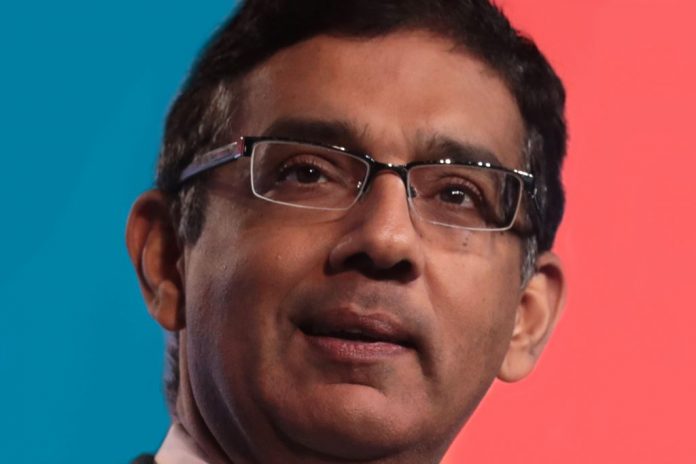 Dinesh D’Souza has a distinguished career as a writer, scholar, and public intellectual. A former policy analyst in the Reagan White House, D’Souza also served as John M. Olin Fellow at the American Enterprise Institute, and the Robert and Karen Rishwain Fellow at the Hoover Institution at Stanford University. He has also become a renowned filmmaker with his top-grossing documentaries and Death of A Nation (2018), Hillary’s America: The Secret History of the Democratic Party (2016), America: Imagine the World Without Her (2014), and 2016: Obama’s America (2012).

Called one of the “top young public-policy makers in the country” by Investor’s Business Daily, D’Souza quickly became known as a major influencer on public policy through his writings. His first book, Illiberal Education (1991), publicized the phenomenon of political correctness in America’s colleges and universities and became a New York Times bestseller for 15 weeks. It has been listed as one of the most influential books of the 1990s.

In 1995, D’Souza published The End of Racism, which became one of the most controversial books of the time and another national bestseller. His 1997 book, Ronald Reagan: How an Ordinary Man Became an Extraordinary Leader, was the first book to make the case for Reagan’s intellectual and political importance. D’Souza’s The Virtue of Prosperity (2000) explored the social and moral implications of wealth.

In 2002, D’Souza published his New York Times bestseller What’s So Great About America, which was critically acclaimed for its thoughtful patriotism. His 2003 book, Letters to a Young Conservative, has become a handbook for a new generation of young conservatives inspired by D’Souza’s style and ideas. The Enemy at Home, published in 2006, stirred up a furious debate both on the left and the right. It became a national bestseller and was published in paperback in 2008, with a new afterword by the author responding to his critics.

Just as in his early years D’Souza was one of the nation’s most articulate spokesmen for a reasoned and thoughtful conservatism, in recent years he has been an equally brilliant and forceful defender of Christianity. What’s So Great About Christianity not only intelligently explained the core doctrines of the Christian faith, it also explained how the freedom and prosperity associated with Western Civilization rest upon the foundation of biblical Christianity. Life After Death: The Evidence shows why the atheist critique of immortality is irrational and draws the striking conclusion that it is reasonable to believe in life after death.

In 2010, he wrote The Roots of Obama’s Rage which was described as the most influential political book of the year and has proven to be yet another best seller. These books—not to mention a razor-sharp wit and entertaining style—have allowed D’Souza to participate in highly-publicized debates about Christianity with some of the most famous atheists and skeptics of our time. His newest book is Godforsaken.

Born in Mumbai, India, D’Souza came to the U.S. as an exchange student and graduated Phi Beta Kappa from Dartmouth College in 1983.

D’Souza has been named one of America’s most influential conservative thinkers by the New York Times Magazine. The World Affairs Council lists him as one of the nation’s 500 leading authorities on international issues, and Newsweek cited him as one of the country’s most prominent Asian-Americans.

D’Souza’s articles have appeared in virtually every major magazine and newspaper, including the New York Times, the Wall Street Journal, the Atlantic Monthly, Vanity Fair, New Republic, and National Review. He has appeared on numerous television programs, including The Today Show, Nightline, The News Hour, The O’Reilly Factor, Moneyline, and Hannity.