Don’t Lose This Place is an incredible speech by Maximo Alvarez, President of Sunshine Gasoline, who shares about freedom and opportunity in America. He also praises President Trump because “He gave up enjoying the fruit of his labors to do this.”

Maximo Alvarez, President of Sunshine Gasoline, praises President Trump: “He gave up enjoying the fruit of his labors to do this.” pic.twitter.com/QAXvR66Jk1

Look at the people at this table. Look at our backgrounds. Just think that in 1961, as a 13 year old, by myself on my way to Spain, I wasn’t even coming here. I arrived in this great country and almost 60 years later I’m sitting next to the President of the United States. Tell me about the American dream. The only country in the world, no other country in the world that you can start a business from the trunk of your car and within a very few years, with hard work, commitment, and are all the core values that we learn from this very culture of ours, we ca become very important to our future. We can become those people who make the next generation better than the one before. This is the only country. Why do you think you had to close the borders, because everybody in the world wants to come over here. Nobody’s ever forced to come over here. We come over here, in my case because my parents chose that would not be indoctrinated by the communist country, by the totalitarian country, by the totalitarian regime. They don’t educate children, absolutely not. And this is something that we need to understand. What is happening in our backyard today, I experienced as an 11 year old. I remember vividly all the promises that a guy named Castro gave on how 99% of the people swallow that pill.

It took many years later, after I read somebody named Saul Alinsky, that I realized that all those people were nothing but useful idiots. I remember Castor, while in the mountains, being interviewed and being asked if he was a communist. He went crazy. I dare you he says, Catolico Apostolico Romano, the Roman Catholic, educated by the Jesuits he was. How dare you. We even have a priest in the mountains. We used to have a priest in the mountains, I remember I was the ? brothers. Christoper Columbus here for those of you who know. And I remember the marriage brothers used to send young kids to the mountains because it was the second coming of our Lord. He was going to save Cuba. I remember how he promised to the farmers, to the wahetos, that you were going to own the land. I remember all the promises that we hear today about free education, and free healthcare, and free land. And my God, no freedom. But he never said that until after he was in power, got rid of all the police, got rid of all the military be there for the last 60 years and counting. And he destroyed each and everyone who helped him, the Catholic Church, everybody. And why do I know that, because I happen to come to this country with the last nine cloistered nuns from Convento Santa Clara because he had taken over the convent, and I was on my way to Spain, I wasn’t even coming here, because I was going to join my brother who my parents had already sent a few months before, because he was in the age where the government will take him for indoctrination purposes. My dad, who had experienced the same thing coming from Spain at the turn of the century, running away not from socialism, communism. He knew better. I remember when he used to tell my mom, Fefa, these SOBs are Communist. My mother says, look, how can you say that. He’s catholic, he has rosary beads all over his neck. It just so happened that when I was on my way to Spain to meet my brother, I was going to go to the ? brothers in La Corena Espanol, same brother here at Christopher Columbus by the way, my brother died and I was stuck in this country. Greatest blessing I ever had. But imagine what happened to Mom and Dad. In one day they lose both kids. This is a family who had never been involved in politics. My father came at age 18 from Spain, running Communist, by himself, never went back. After a long, long life of sacrifice, when he was about to enjoy the fruit of his labors, just like the President who is helping us today, because he could have been just having a good time on one of his many beautiful golf courses, but no, but yet he gave up enjoying the fruit of his labors to do this, so did my dad, that’s why I love you, exactly the same. So when they’re about to do that, from one day to the next, they end up in this country with the shirt that he was wearing on his back. And did a maximum. I’d been here already for four years. Thank God.

Talk about Socialism, Catholic church, 14000 kids who came like me in this country without parents, and we were provided an opportunity, this is what makes our country great. They didn’t give me free nothing. They gave me the opportunity, that is the most valuable thing in the world. Now when I say it didn’t give me any free something please understand that at 13 years old I had to be provided with a home I had to be provided with food and an education. That’s is socialism, that’s Americanism, that’s the America that these people are trying to destroy today by using phony terms like socialism, they’re not, their communist. Never forget that. I know our President understands that because he knows, he’s been all over the world, and you’re surrounded by great people, very loyal people, who have your back. I remember the first time I gave speech about something like this, telling about I came from Cuba and blah blah blah, I remember this is around October 2016, I thought you were a little crazy for the sacrifice you are about to take, but I predicted that we we’re going to elect you in November and I was going to see you in the White House in January. Thank you very much, because of the situations right now I can not give you a hug, otherwise thank you very much and I want to leave you with one last thing. Never forget about my dad who only had a 6th grade education but I think he was the greatest philosopher I ever met. He used to tell us how lucky he was because he was able to come from Spain to Cuba, and then he came from Cuba to United States and he saw me graduate from college that was the biggest prize he ever had, and he said, don’t lose this place because you are never going to be as lucky as me, because if you lose this place you have no place to go. So with that, please keep that in mind, and please people explain that to our young people who are demonstrating out there. Don’t be useful idiots. Please understand what’s happening in our country, what happen to our parents, and see what’s happening to America today. 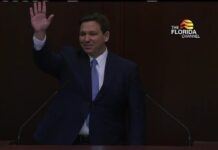 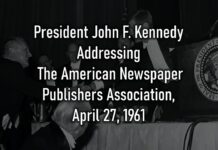 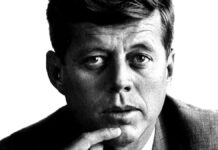