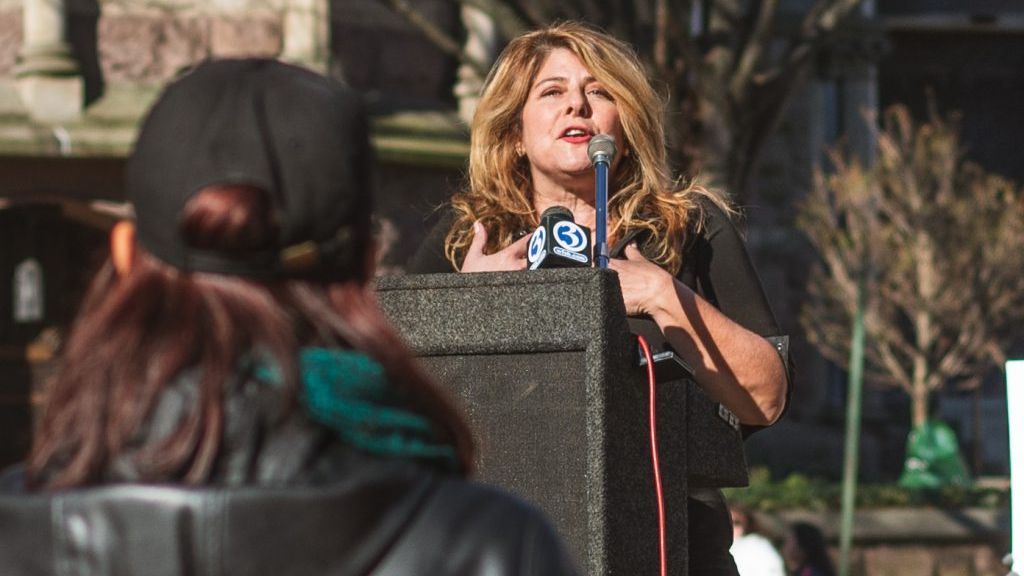 Dr. Naomi Wolf Confronts Yale for Crimes Against Students. Dr. Wolf declares that Yale will “have blood on its hands for damaging young, healthy women and men. MRNA Covid Vaccines do not stop transmission but do cause multiple irreversible harms, so they do not make any sense to mandate.”

Dr. Wolf declares that Yale will “have blood on its hands for damaging young healthy women and men. MRNA Covid Vaccines do not stop transmission but do cause multiple irreversible harms, so they do not make any sense to mandate.”

On December 2, 2022, United for Student Choice held a rally featuring Dr. Naomi Wolf to protest Yale’s Covid-19 shot mandates for students. Yale announced on October 27th that the University will require all students (but not faculty or staff) to receive the bivalent booster by January 31st, regardless of the number of previous boosters taken. It is well established that the shots do not prevent infection or transmission. Further, they have a concerning risk profile for this age group. Yale is essentially mandating risk without any community benefit.

As Dr. Wolf eloquently stated, students come to Yale from around the world to receive an education not offered by other schools and to be part Yale’s motto “Lux et Veritas”, freedom of light and truth. Yet after 35 years of advocacy for women’s health, human rights, and civil liberties, she cannot believe she is now standing outside those walls as an alumna and as a mom to fight for sovereign rights at her own school.

Yale has not presented any data to support these mandates and it is clear that the mandates are insupportable by current data. At the rally,  Dr. Wolf, Attorney Tricia Lindsay, former UConn scholar Phoebe Liou, and other speakers made it clear that it is on the shoulders of individual students to say no. “These young people don’t even deserve to think about this endangerment of their future, this crushing of their spirits, just to get the education that many of their parents have saved for and slaved for,” said Dr. Wolf.

Some students are aware of the risk of injury yet are afraid to speak up, but others are completely unaware and still believe in the heavy marketing of “safe and effective”. In either case, there is no informed consent.

Dr. Wolf said the discrimination is a violation of Title IX, on the foundation of 3,500 experts reviewing a Pfizer document released by court order, which showed “20 different names for f-ing up your menstral cycle” and 72% of adverse events were women. How can young women pursue their education, play in athletics, and be able to perform at their best when they are suffering? Worse, Yale is organ trafficking students’ bodies for medical experimentation while receiving millions of federal funds. It is not a matter of if, but when, lawsuits will occur.

At the rally, a Yale student who regularly participates in intensive exercise for health expressed how he felt extremely coerced, yet no one seemed interested in hearing his point of view. Despite not wanting to get the shots, he received the initial two thinking he was helping society to return to normal in the pandemic. He doesn’t want to take another booster and is very upset that Yale is now also mandating the flu shot.

Highlighted in this recently announced lawsuit, it is blatantly apparent that Yale provides little to no support for students struggling with mental health issues.

Phoebe, a speaker at the rally, was a former UConn Babbidge Scholar canceled from her university along with $23,000 of merit scholarships. She said that being mandated at school was “the loneliest time of my life”, not knowing who to confide in or where to find help, as “all her friends and professors were vaccinated” at school. Since colleges do not create space for those who are of this mind, she’s on a mission to provide a safe haven and connect students to one another, as a co-founder of Northstar Students United, a grassroots “on-the-ground” advocacy.

Yale does not seem to be interested in emerging science or comparing illness rates at schools which have never mandated the vaccine. The small percentage of students who are unafraid to ask for their rights to be respected from the administration need support. Students who have been injured or who do not wish to receive the shot receive no support from Yale.

On December 2nd, we called on the Yale administration and faculty to be the educators and leaders they were appointed to be in “Lux et Veritas”. Thanks to many advocates who pitched in like angels, the speeches were smooth and powerful, and the event ended with a walk through the campus to display how we are highly concerned about the gravity of the situation. The choices made by the students, faculty, and administration today will determine their tomorrow.