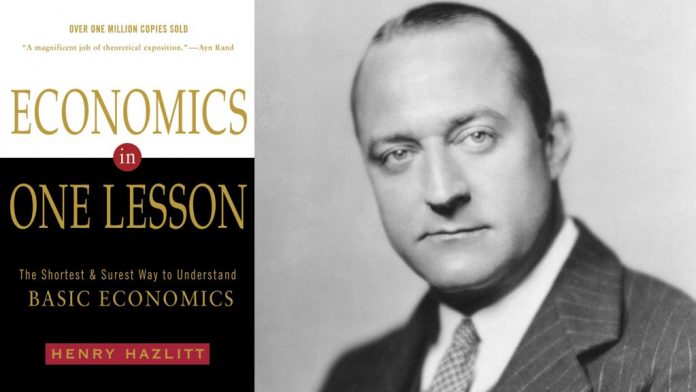 With over a million copies sold, Economics in One Lesson is an essential guide to the basics of economic theory. A fundamental influence on modern libertarianism, Hazlitt defends capitalism and the free market from economic myths that persist to this day.

Considered among the leading economic thinkers of the “Austrian School,” which includes Carl Menger, Ludwig von Mises, Friedrich (F.A.) Hayek, and others, Henry Hazlitt (1894-1993), was a libertarian philosopher, an economist, and a journalist. He was the founding vice-president of the Foundation for Economic Education and an early editor of The Freeman magazine, an influential libertarian publication.  Hazlitt wrote Economics in One Lesson, his seminal work, in 1946. Concise and instructive, it is also deceptively prescient and far-reaching in its efforts to dissemble economic fallacies that are so prevalent they have almost become a new orthodoxy.

Economic commentators across the political spectrum have credited Hazlitt with foreseeing the collapse of the global economy which occurred more than 50 years after the initial publication of Economics in One Lesson. Hazlitt’s focus on non-governmental solutions, strong — and strongly reasoned — anti-deficit position, and general emphasis on free markets, economic liberty of individuals, and the dangers of government intervention make Economics in One Lesson every bit as relevant and valuable today as it has been since publication.

“A magnificent job of theoretical exposition.”

“I strongly recommend that every American acquire some basic knowledge of economics, monetary policy, and the intersection of politics with the economy. No formal classroom is required; a desire to read and learn will suffice. There are countless important books to consider, but the following are an excellent starting point: The Law by Frédéric Bastiat; Economics in One Lesson by Henry Hazlitt; What has Government Done to our Money? by Murray Rothbard; The Road to Serfdom by Friedrich Hayek; and Economics for Real People by Gene Callahan.
If you simply read and comprehend these relatively short texts, you will know far more than most educated people about economics and government. You certainly will develop a far greater understanding of how supposedly benevolent government policies destroy prosperity. If you care about the future of this country, arm yourself with knowledge and fight back against economic ignorance. We disregard economics and history at our own peril.”

A simple, straightforward analysis of economic fallacies that are so prevalent they have almost become a new orthodoxy.

Henry Hazlitt (1894-1993), was a libertarian philosopher, an economist, and a journalist. He was the founding vice-president of the Foundation for Economic Education and an early editor of The Freeman magazine, an important libertarian publication.  Hazlitt wrote Economics in One Lesson, his seminal text on free market economics, in 1946, bringing his ideas and those of the so-called Austrian School to the American scene. His work has influenced the likes of economist Ludwig von Mises, novelist and essayist Ayn Rand, and 2008 Libertarian Party Presidential nominee and congressman, Ron Paul. Hazlitt has been cited as one of the most influential literary critics and economic writers of his time.