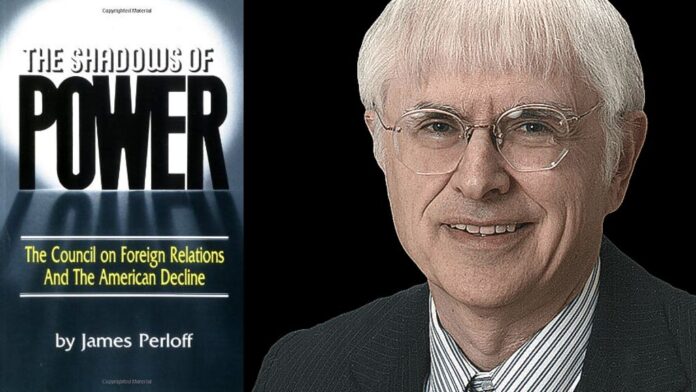 There is good news and bad news. The good news is this book has been written. The bad news is, it’s true. Get ready to learn the influence of the internationalist Establishment of the United States. You’ll learn the impact this backdoor powerhouse has made on America’s past – and what it is planning for the future in James Perloff’s “The Shadows of Power The Council on Foreign Relations And The American Decline.”

New 2002 edition-includes updated list of CFR members! James Perloff exposes the subversive roots and global designs of the CFR. Passed off as a think-tank, this group is a key “power behind the throne,” with hundreds of top-appointed government officials drawn from its ranks. Traces activity from the Wilson to Reagan administrations.

Does America have a hidden oligarchy? Is U.S. foreign policy run by a closed shop? What is the Council on Foreign Relations? It began in 1921 as a front organization for J.P. Morgan and Company. By World War II it had acquired unrivaled influence on American foreign policy. Hundreds of U.S. government administrators and diplomats have been drawn from its ranks – regardless of which party has occupied the White House. But what does the Council on Foreign Relations stand for? Why do the major media avoid discussing it? What has been its impact on America’s past – and what is it planning for the future? These questions and more are answered by James Perloff in The Shadows of Power.